“The Power and the Glory” 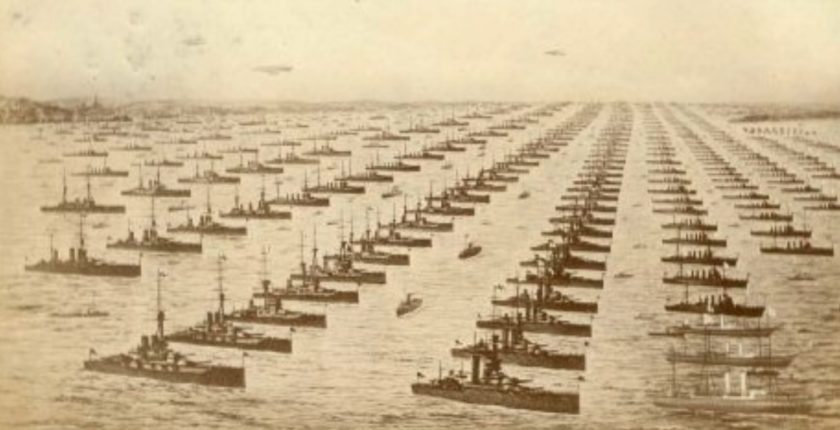 Q: In a video at the Liverpool Museum (“The Power and the Glory?”), Churchill is quoted as saying that Britain, having gained prosperity by her efforts, must be prepared to defend it: “We have got all we want in territory, and our claim to be left in the unmolested enjoyment of vast and splendid possessions.”

I am an American and large numbers of my fellow citizens seem to struggle with the same issue; Churchill’s words suggest an answer, but I am not sure the Museum regards his words as truth or heresy. When did he say or write this?—A.H., via email.

Churchill before World War I

Churchill’s passage (the words you heard in bold face, below) is from a memorandum to the Cabinet as First Lord of the Admiralty, in December 1913. Churchill reproduced it in The World Crisis, vol. 1, 1911-1914.1 Of course his emphasis then was on the Navy, his own ministry, and Britain’s chief military arm in those days:

We must begin by recognizing how different the part played by our Navy is from that of the Navies of every other country. Alone among the great modern States we can neither defend the soil upon which we live nor subsist upon its produce….The burden of responsibility laid upon the British Navy is heavy, and its weight increases year by year.

All the world is building ships of the greatest power, training officers and men, creating arsenals, and laying broad and deep the foundations of future permanent naval development and expansion…. None of these Powers need, like us, Navies to defend their actual safety or independence. They build them so as to play a part in the world’s affairs. It is sport to them. It is death to us.

Churchill goes on soberly to contemplate how Britain must ensure her security, emphasizing the mutually dependent roles of diplomacy and power:

It is not suggested that the whole world will turn upon us, or that our preparations should contemplate such a monstrous contingency. By a sober and modest conduct, by a skilful diplomacy, we can in part disarm and in part divide the elements of potential danger. But two things must be remembered. First, that our diplomacy depends in a great part for its effectiveness upon our naval position, and that our naval strength is the one great balancing force which we can contribute to our own safety and to the peace of the world.

He then invokes the words quoted by the Liverpool Museum, acknowledging that not everybody would approve of Britain’s actions:

…we are not a young people with a scanty inheritance. We have engrossed to ourselves, in times when other powerful nations were paralysed by barbarism or internal war, an immense share of the wealth and traffic of the world. We have got all we want in territory, and our claim to be left in the unmolested enjoyment of vast and splendid possessions, often seems less reasonable to others than to us.

Next, Churchill admits and then justifies the role of a great power:

Further, we do not always play the humble role of passive unassertiveness. We have intervened regularly—as it was our duty to do, and as we could not help doing—in the affairs of Europe and of the world. We are now deeply involved in the European situation. We have responsibilities in many quarters.

Churchill takes the prescient view that, while his government has tried to preserve the peace, the danger of war is not over—using words which may remind readers of the situations we face a century later:

We have passed through a year of continuous anxiety and, although I believe the foundations of peace among the Great Powers have been strengthened, the causes which might lead to a general war have not been removed and often remind us of their presence.

In Churchill’s judgment, if, for example, we have strengthened the foundations of peace through disarmament agreements, but do not attend to the causes of strife, the only road left to us is to remain prepared for war. His words would have echoes in the 1930s, as he again took up the theme of peace through strength:

There has not been the slightest abatement of naval and military preparation. On the contrary, we are witnessing this year increases of expenditure by the Continental Powers beyond all previous experience. The world is arming as it has never armed before. Every suggestion of arrest or limitation has been brushed aside….I could not feel that I was doing my duty if I did not warn the country of its danger.

Churchill was nothing if he was not consistent. In the 1930s, when the balance of power began to depend more on the air power than sea power, he was quick to recommend the same degree of preparedness in the air that he had once urged upon the oceans. On 7 February 1934, scarcely a year after Hitler had become German chancellor, he told Parliament:

I cannot conceive how…we can delay in establishing the principle of having an air force at least as strong as that of any Power that can get at us. I think that is a perfectly reasonable thing to do. It would only begin to put us back to the position in which we were brought up.

A year later, on 19 March 1935, he added: “From being the least vulnerable of all nations we have, through developments in the air, become the most vulnerable.”

By April 1938, with Germany’s air power now at formidable levels, he wrote: “We have never been likely to get into trouble by having an extra thousand or two of up-to-date aeroplanes at our disposal.”

Churchill summarized how a great power comes to play a responsible role in the world, and how it might yet be brought low, in an offhand remark to one of his informants on German rearmament, RAF Wing-Commander Tor Anderson, who told biographer Sir Martin Gilbert: “You would give Churchill a new idea, he would say nothing. Two hours later, while feeding the goldfish, he would come out with the flaw in what you said…He said [this] to me once speaking of Britain, and, as it were, to Britain”:

You came into big things as an accident of naval power when you are an island. The world had confidence in you. You became the workshop of the world. You populated the island beyond its capacity. Through an accident of air power you will probably cease to exist.”2

Featured image: The Fleet assembled for the royal review at Spithead, July 1914. After the review Churchill’s First Sea Lord, Prince Louis of Battenberg, with Churchill’s approval, took the decision not to scatter the fleet but to send it to its war stations. (Contemporary postcard)