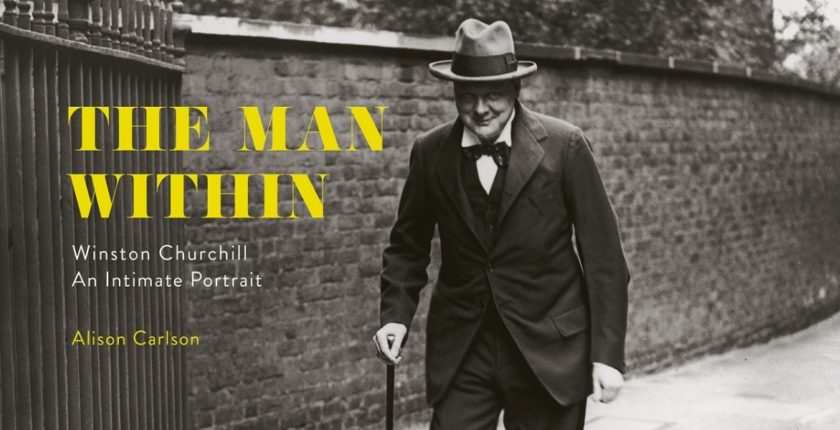 Alison Carlson’s photo-documentary of Churchill, The Man Within, has barely a third of the images of these more ambitious works, but she provides a number of interesting, hitherto unpublished ones, perhaps a fifth of the total, that have never seen print. Examples: the newlywed Clementine and Winston on the way to their wedding reception in 1908; a lovely shot of their three daughters, Diana, Sarah and Mary, in 1925; several recently discovered group photos of young Winston at Harrow, rescued from a barn on a dairy farm in the Cotswolds.

A professional photographer, Carlson sought revealing photographs which capture Churchill’s “kaleidoscopic” personality in thrilling, fleeting fractions of a second during his remarkable ninety years. Each of her nine sections focuses on a different facet, from his early youth to his years as a soldier and statesman in war and peace, presenting him also as husband, father, and a passionate pursuer of hobbies like polo and painting. The sections begin with a double-page spread printed “50% black,” enlarged and cropped from a famous photo—a dramatic touch.

The photos are arranged in landscape format, a more elaborate presentation than the crammed Gilbert or Churchill-Gernsheim collections, with far more white space than the Lady Soames’s artistic Family Album. Most of the photos are large format—a style not seen since in the Churchill field for fifty years: Tatlock Miller and Loudon Sainthill’s Churchill: The Walk with Destiny (1959) and 1874-1965 The Churchill Years by the editors of The Times (1965). But Carlson’s photographs are clearer and sharper, thanks to a half-century improvement in print technology. The accompanying captions are on the sparse side, with a few trifling errors and sometimes failing to identify all the people pictured.

Although many of the photos are not new, they were chosen for impact and according to the author’s taste. Carlson has an eye for some of the most emotive old favorites: the Frenchman lighting WSC’s cigar at Cherbourg after the successful invasion of France in 1944; daughter Mary with her father, mounting his top hat to wave from his cane in 1943; the watery-eyed old man in the 1960s, juxtaposed with his touching tribute to his wife in his 1916 letter from the trenches, to be opened in the event of his death.

The text is as brief as the photos are generous: short Churchill quotations in large type, which I’m pleased to find well researched. As far as I can tell, most of them are in my book, Churchill by Himself, which is all to the good—that’s what it’s for. I only hope Ms. Carlson used the latest edition with the most corrections. Alas there are more to come, in the next edition, if there is one.

While many quotations seem to have little or no relation to the photograph, some are brilliantly apposite. A good example is a spread containing two photos of Winston and Clementine with Aristotle Onassis (82-83): “This is the sort of company I should like to find in heaven. Stained, perhaps—stained but positive. Not these flaccid sea anemones of virtue who can hardly wobble an antenna in the turgid waters of negativity.” (That was actually said to Violet Bonham-Carter, over two decades before Churchill met “Ari.” But it fits Onassis well—no sea anemone he.)

The Man Within is less comprehensive in terms of historical explanations than its predecessors, more a coffee table book than a documentary, aimed at the browser or photo connoisseur. It’s not inexpensive (and the e-book version alone doesn’t do it justice). But Ms. Carlson’s well chosen, finely printed, large format photos make for an absorbing book, well worth owning by anyone from casual browser to the expert.