The Literary Churchill – by Jonathan Rose 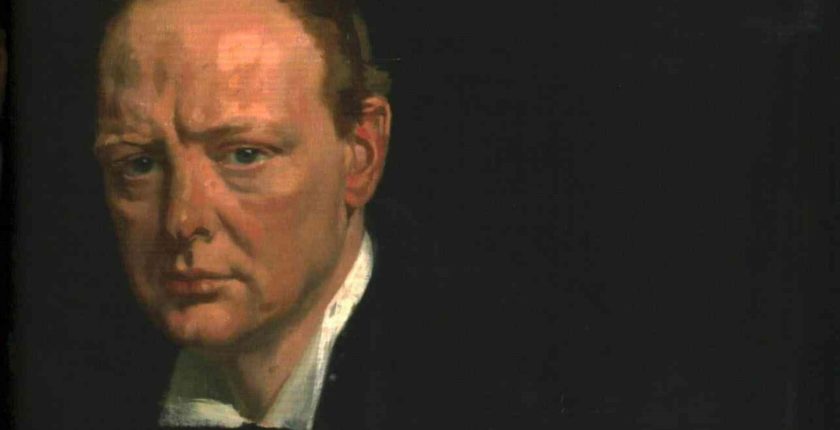 Churchill on the Boards and Between Them

The title of this book by Jonathan Rose, a professor of history at Drew University, reminds us that, aside from political life, Winston S. Churchill wrote dozens of books and won the Nobel Prize for Literature. Its subtitle indicates that Rose focuses not just on Churchill’s books and other writings, but also on his reading and his interest in the theater.

Churchill himself wrote that his style was modeled on Gibbon and Macaulay, with a bit of his own thrown in. His biographers notice that he needed income from writing to support himself and his family, and he aimed to vindicate his political record in what he wrote. They plunder his writings for autobiographical tidbits and acknowledge his Nobel Prize. Sometimes they tell us he enjoyed music hall shows, plays, and films. But they leave his literary endeavors in the shade of his political career.

In this company Rose makes an important contribution. He has unearthed new evidence in the Churchill Archives Centre and elsewhere of the wide range of Churchill’s reading. As an intellectual historian who specializes in modern Britain, he is well qualified to trace Churchill’s literary debts to others besides Gibbon and Macaulay, especially to a host of contemporary writers like H. G. Wells, George Bernard Shaw, and Oscar Wilde. He recognizes the significance of passages in Churchill’s writings that others have neglected.

In discussing The River War, Churchill’s account of Britain’s campaign to reconquer the Sudan, Rose notices his sympathy for the Mahdi, who founded the Dervish empire, and his criticisms of cruelty in the British army and destruction of the Mahdi’s tomb and remains by Herbert Kitchener. Later, he traces Churchill’s fascination with the transformation of war by modern technology, showing how often Churchill drew inspiration from H. G. Wells. Many examples bring out Churchill’s originality and his unconventional streak. Casting his nets far and wide, Rose hauls them up full of unexpected fish. Even those who have read the earlier studies will find much that is new and interesting in his book.

Realizing that one cannot appreciate Churchill without understanding his literary life, Rose connects Churchill’s career as a statesman with his reading, writing, and theater-going. He likens Churchill’s conduct during milestones in his political career with incidents in his youthful novel Savrola, which unfolds a revolution in the fictional country of Laurania.

Biographers have often remarked on parallels between books read by the eponymous hero of Churchill’s novel and Churchill himself, their shared fascination with oratory, and their common debt to governesses, not to mention other similarities less often noticed, but have erred in reading his protagonist as a fictional representation of Churchill or the novel as an autobiography before the fact. Although Rose leaves no doubt what he thinks of Savrola, which “arguably ranks among the worst novels of the nineteenth century” (65), and pointedly notes that its author urged friends not to read it (68), he claims that “bad books can be wonderfully revealing, and this one in particular offers remarkable insights into the author’s core political convictions and methods” (65).

Rose’s efforts to grasp those insights in Savrola even turned up a Chinese translation left out of Ronald Cohen’s bibliography (70–71). Yet, after a discerning discussion of what the novel reveals of our author’s philosophy as a young man, Rose veers off the tracks, asserting that “Churchill’s politics followed his literary imagination. He recognized and resisted Hitler largely because the Führer so closely resembled the fictional villain he had created years before” (72).

Savrola’s antagonist, the dictator Molara, has a touch of Hitler’s hardness but none of his ideological fervor or rhetorical power. Nor does Rose persuade us that the genesis of the Dardanelles campaign in the First World War (126), and of the British attack on the French fleet in the Second (325), was the naval bombardment of the Lauranian revolutionaries by the dictator’s admiral at the end of Savrola.

But there is more: Rose argues that Churchill took his bearings in politics from the Victorian theater, which gave him a lifelong understanding of statesmanship as melodramatic acting, leaving him wedded to simplistic, unsophisticated thinking after people chastened by the Great War adopted less confident, more nuanced views. Rose goes so far as to argue that Churchill’s speeches and writings are full of “claptrap,” in its literal theatrical meaning of expressions designed to elicit applause (174, 305–07).

Churchill was fascinated by the theater all his life. He gave his first public speech at the Empire Theatre in London’s Leicester Square. He knew many speeches in Shakespeare’s plays by heart. He often spent evenings at the theater and befriended actors and playwrights: he even proposed to an actress, and one of his daughters had a career on the stage. Someone writing on Churchill and the theater—a good subject for a new book—would find many leads in Rose’s book. His invocation of melodrama is intriguing and revealing—up to a point. Yet he is wrong to conclude that Churchill’s understanding of politics came from melodrama and issued in claptrap.

The Literary Churchill is at once more and less than one might expect. Since Rose everywhere connects the statesman’s intellectual world with his career in politics, his book becomes a biography which sometimes strays from Churchill’s life as a man of letters, as in his quotations from the dull prose of Britain’s Mass Observation polling during the Second World War, or his lengthy account of Churchill’s influence on John F. Kennedy at the end. At the same time, although Rose touches on Churchill’s major literary works and many lesser ones, his treatment of most is only sketchy, and his view distorted by insistence on seeing them through his melodramatic prism.

Churchill’s self-deprecating humor in My Early Life, his varied interests in Thoughts and Adventures, and his Olympian judgments on men and events in Marlborough and Great Contemporaries sprang from a mind that ranged far beyond melodrama. He was a bigger man, and his literary works are richer, than this historian’s thesis. The Literary Churchill advances our knowledge of Churchill’s intellectual life, but more sustained attention to Churchill’s books would have made it better. The definitive book on Churchill’s writings remains to be written.