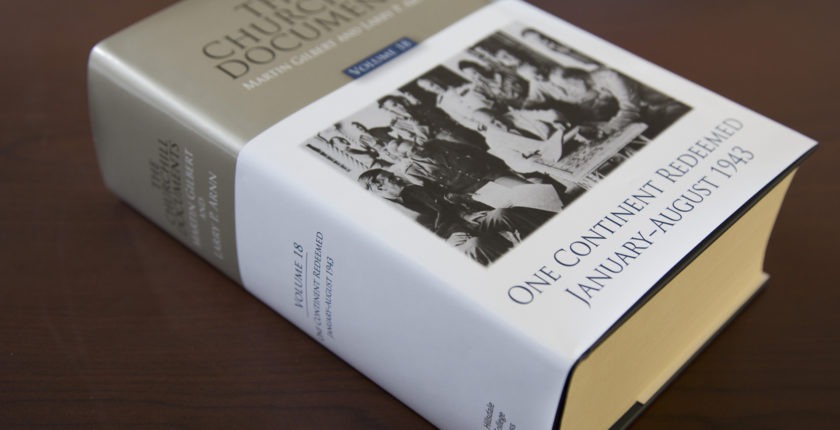 “A Warrior for the Working Day”

The Churchill-obsessed go through various phases. The affliction usually takes hold when one hears excerpts from the great speeches of 1940 or leafs through his six-volume memoir of World War II. It deepens as one reads some of his other works—his five volumes on World War I, or his autobiography, My Early Life. In the next stage, it continues with the collection and reading of his biography of his great ancestor, the Duke of Marlborough (up to six volumes, depending on the edition).

Fully possessed, one wades into his great official biography—more chronicle than analysis, but no less wonderful for all that—the eight volumes written by his son Randolph and subsequently by the late, lamented historian, Sir Martin Gilbert. Shortly before or after, one develops the secondary symptom of reading the “Churchillians” as well—The Fringes of Power by John Colville, his secretary during much of World War II, or the charming Winston Churchill as I Knew Him by the woman who didn’t marry him but remained a lifetime friend, Violet Bonham Carter (yes, she was the grandmother of Helena Bonham Carter, a.k.a. Bellatrix Lestrange of Harry Potter fame).

Of course, the besotted student of the great man (North American, almost always, the British now being merely embarrassed by him) has meanwhile begun making pilgrimages to the holy sites—the Churchill War Rooms in London, Chartwell, and Blenheim Palace. In the final stage before visible madness (which takes the form of putting “Action This Day” stickers on papers to one’s subordinates and placing a Churchill toby mug on the mantelpiece), one accumulates the volumes of documents that accompany the official biography.

In this connection it is delightful to welcome Volume 18—yes, 18—in this series, covering six months of World War II from January through August 1943. It is the fifth in the series of war documents, the first three published by Sir Martin Gilbert before he passed away, and the most recent two taken up by his former research assistant Larry P. Arnn, the president of Hillsdale College.

We will never again have so thorough a record of any statesman’s decisionmaking, and certainly not of one so great, in a war so vast and consequential. Accompanied by a full apparatus of footnotes identifying persons mentioned, correcting dates, and clarifying obscure references, the documents volumes contain an extraordinary array of materials: official memoranda, correspondence, speeches, diary entries by friends (and enemies), reports, instructions, recollections, and even dinner lists.

The early 1940s were still an era in which decisions were made in face-to-face meetings; in which adults routinely wrote letters, and were willing to confide candid thoughts to their journals and diaries. British decision-making was particularly remarkable for the orderliness and clarity of the written word and its prominent place in the workings of government.

Indeed, at the outset of his tenure as Prime Minister, Churchill told his subordinates to disregard any instructions from him that did not come in writing. And so many of them—not just Churchill, but his friends, his American counterparts, journalists, and public officials—wrote lucidly and powerfully. Amusingly, too, as when Captain Richard Pim of the Royal Navy recorded the Prime Minister’s stay at the White House in May 1943:

One morning the President thought he would visit the Prime Minister in his bedroom to see if he had everything he required. At that moment Mr Churchill was coming out of his bathroom looking for a towel. The President expressed his regret at catching the Prime Minister unawares and unclad, but the latter replied “Please do not concern yourself – England has nothing to hide from the President of the United States.”

In reading the documents, one detects the little jolts of electricity that clean, confident writing transmits, and which invigorated a bureaucracy in its fourth year of unremitting wartime labor. Bureaucratic writing today is much duller, and our government the worse for it. PowerPoint, email, video-teleconferencing, and phone calls have displaced minutes, memos, and state papers. More to the point, our politicians and bureaucrats have so little mastery of the English language, and so little inclination to commit their thoughts to paper—for their own benefit or their colleagues, let alone for posterity—that they will mainly leave behind anodyne or semi-literate musings.

Nor are they likely to be quite so candid in admitting, as Churchill did in speaking of the relationship with the United States to Parliament in June 1943 that, “All sorts of divergences, all sorts of differences of outlook and all sorts of awkward little jars necessarily occur as we roll ponderously forward together along the rough and broken road of war.”

It is not bad to start browsing through this treasure trove with this volume, precisely because it has none of the drama of 1940, or the awful foreboding of 1945. This is the middle of the war, when the possible outcomes began to narrow in number, but the obstacles before Churchill and his colleagues loomed large.

The United States is thoroughly engaged in the war and the Allies have landed in North Africa after an acrimonious debate, but the campaign there is far from won. The Soviets might still desert the cause if the Anglo-Americans do not invade mainland Europe in 1943, or so Churchill and Roosevelt think. The French exiles under de Gaulle are impossible to deal with, but the old Vichy generals and admirals are probably worse. The great week to ten-day conferences—in this volume alone, at Casablanca, Washington, and Quebec—to settle the future course of the war must be prepared, staffed, conducted and followed up. Churchill’s 69-year-old body is showing the strain of it all.

Readers dipping into these documents, particularly if they know something about government work today, are amazed at Churchill’s mastery of detail, and the questions with which he peppers his subordinates. To the military and civilian heads of the Royal Air Force on 7 January 1943: “Considering that Bomber Command have done hardly any flying in the last month worth speaking of, it is astonishing that only 547 aircraft should be serviceable and fit for operations out of an establishment of 808.” Actually, it was probably not astonishing (the RAF had, after all, been running all out for about four years straight), but not a bad thing for his subordinates to have to explain.

No less impressive are his reflections on inflection points in the war. See, for example, his 26 July 1943 “Thoughts on the Fall of Mussolini,” a memorandum several pages long working through the implications of the coup that brought Mussolini down, and that would take Italy out of the war. No less striking than his prescience is the sheer fact of a head of government taking the time to spell out to his colleagues and subordinates what he makes of the great events of the war, and to express himself with a ruthless candor impossible in the age of ubiquitous leaks.

Of war criminals swept up in the liberation of Italy he writes, “Some may prefer prompt execution without trial except for identification purposes. Others may prefer that they be kept in confinement till the end of the war in Europe and their fate decided together with that of other war criminals. Personally I am fairly indifferent on this matter, provided always that no solid military advantages are sacrificed for the sake of immediate vengeance.”

These documents are also valuable in their least dramatic moments, because they show how Churchill’s genius consisted not only in inspiration, but in an astounding capacity for grinding, meticulous labor. Yes, he had his flights of fancy, his unreasonable demands, his implausible schemes—but that is far less important than the work ethic that, with his intelligence and judgment, helped steer his exhausted empire and its powerful but raw and untested ally across the Atlantic Ocean to victory.

At a time when twenty politicians have put themselves forward as potential presidents of the United States, we would do well to ponder a lesson of this volume—that it is the capacity for sustained, high-level executive work, as well as the ringing phrases, that make a leader effective; that rhetoric divorced from action is empty, and planning without careful implementation downright dangerous.

There are no Churchills out there, and thank goodness, we do not need them just now, because we face nothing like the dangers and struggles he did. But in all conscience, it is a troubling enough time that we need a President who has more than a bit of the Churchillian ethos, someone who is, as Shakespeare puts it, a warrior for the working day.

Eliot A. Cohen is professor of strategic studies at Johns Hopkins School of Advanced International Studies, and has served as Counselor of the Department of State. This review is reprinted by kind permission of the author and The American Interest, 24 December 2015, www.the-american-interest.com.