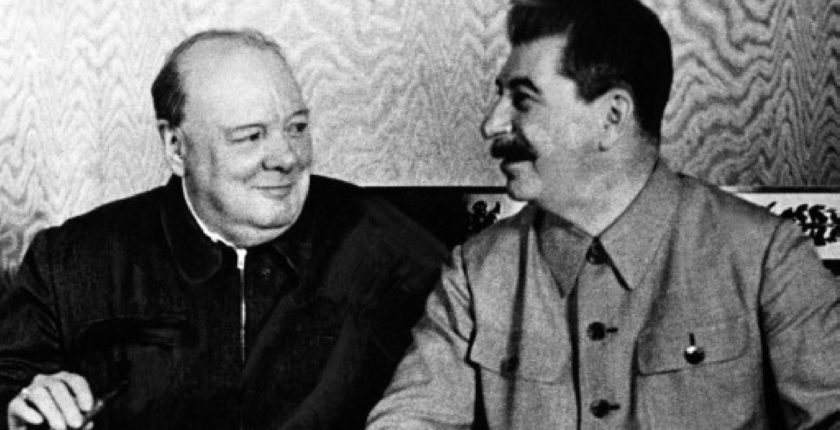 “Soft underbelly” (of Europe, the Axis Powers, or the Mediterranean) was a famous Churchill expression, conveying his idea of attacking Germany through Italy, before the invasion of Normandy. Did he use the term more than once, or in reference to anything else? I’d be grateful if you can point out the usage(s) by reference to specific speech or speeches, if possible.​ ​Also, who initiated the phrase “Fortress Europe” in relation to Hitler’s conquests? —R.C., Naples, Fla.

“Fortress Europe” was not Churchill’s phrase—emphatically so (read on). “Soft underbelly” comes up many times in the literature; no source we can find confirms Churchill’s first use of the phrase, though it was certainly his. There are a over eighty appearances of “soft underbelly” in the Churchill canon, but none in his writings or speeches. Frustratingly, too, no source we could find discusses the first use of the phrase in World War II.

All sources agree that the concept, as opposed to the actual words, was that of Churchill and Chief of the Imperial Staff Sir Alan Brooke, later Field Marshal Lord Alanbrooke—which Churchill related to Stalin in their first meeting, in Moscow in August 1942. It was a difficult confrontation. Churchill had come to explain why there would be no immediate invasion of France—news he compared to delivering a large lump of ice to the North Pole. Averell Harriman, United States ambassador to Moscow, described the meeting:

Stalin took issue at every point with bluntness, almost to the point of insult, with such remarks as ‘You can’t win wars if you aren’t willing to take risks’ and ‘You must not be so afraid of the Germans.’ This phase of the discussion ended by Stalin stating abruptly, but with dignity, that he could not force action [by the Allies] but he did not agree with the arguments….[Later, Churchill brought] the discussion back to the Second Front. He explained the decision regarding ‘Torch’ [the invasion of North Africa, which began on 2 November 1942] and its tactics, emphasizing the need for secrecy….About this time the Prime Minister drew a picture of a crocodile and pointed out that it was as well to strike the belly as the snout.1

Neither Harriman nor any other source quotes Churchill as using the words “soft underbelly” at that time—as noted by the historian Geoffrey Best: “Note that Churchill did not say, ‘soft underbelly of the Axis.’ What he did say was ill-judged. The Italian government proved soft enough but the Italian terrain not at all….”2

Testifying to Best’s view some years before was General Mark Clark, who commanded the U.S. Fifth Army, later the Fifteenth Army Group, in the Italian campaign. Clark heard Churchill’s use of “soft underbelly” shortly after the Moscow meeting, when he and Eisenhower took up the question of where the Anglo-Americans should strike first. In autumn 1942, he and Eisenhower explained to General Marshall, U.S. Army chief of staff:

A cross-channel operation was [then] utterly impossible. We could not even get across without the British showing us the way and taking us by the hand. We did not have the means. And so it was decided that we would take this matter up with Mr. Churchill, which we did. And that is where his persuasive eloquence first impressed me. He got up before a map with his pointer and he kept pointing to Gibraltar, North Africa, the Mediterranean, Sicily and Italy. Finally he said, “We should slit the soft belly of the Mediterranean.” Well, my friends, I assure you, when I landed at Salerno, I found it was a tough old gut!3

General Clark nevertheless confirmed the correctness in his opinion of Churchill’s argument: “I might say that we soon were persuaded that that was the best thing to do.”4

If Churchill didn’t use “soft underbelly” with Stalin, he soon took up the phrase, deploying it widely in the ensuing weeks. His wartime secretary, Elizabeth Nel, wrote that he frequently repeated it to his staff. Although we can find it in no speech or writings by him, he must have used it to a broad audience, because it caught on and regularly appeared in the press. Montgomery’s and Eisenhower’s memoirs mention “soft underbelly” contemporaneously. John Grigg, identifying the southern strategy as that of Alan Brooke, referred to it as “Churchill’s phrase but Brooke’s notion.”5

​With regard to this phrase, repeatedly used to describe Hitler’s barricaded France in the months before D-Day, we can say with assurance that it was not invented by Churchill, who deplored it. Most likely it began with the Germans, boasting of their defenses. But Field Marshal the Earl Alexander (among those who remembered Churchill’s use of “soft underbelly”) deplored likening Europe to a fortress:

​Once when I used the term “Hitler’s European Fortress,”​ ​he turned on me in anger and said, “Never use that term again. Never use that term again.” ​And I did not—not in his presence—because he was very right, for psychological and morale reasons. Winston had a very acute sense of the meaning of words and what they would mean to other people and their resulting effect on those who heard them.6

6 Earl Alexander of Tunis, address of 24 April 1967 to the Churchill Society, Edmonton, in The Heroic Memory, 43.