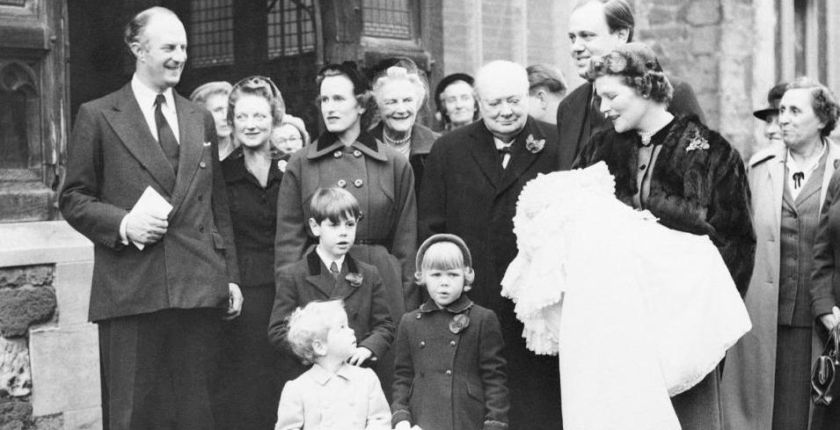 Smith confirms a famous Churchill quip about his youth: “I accumulated in those years so fine a surplus in the Bank of Observance that I have been drawing confidently upon it ever since. Weddings, christenings, and funerals have brought in a steady annual income, and I have never made too close enquiries about the state of my account. It might well even be that I should find an overdraft.” The christening of Charlotte Soames at Westerham Parish Church, 6 November 1954. L-R: Godparents Fitzroy Maclean and Diana Churchill, unknown (nurse?), Clementine and Winston Churchill, Christopher and Mary Soames. Far right, at a guess, Chartwell's cook Georgina Landemare. Foreground: Nicholas, Jeremy and Emma, the Soames’s first three children. (Photo presented by Sir Fitzroy Maclean of Dunconnel KT, 1994) 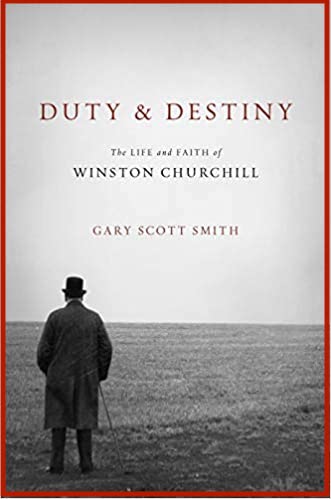 One of the biggest problems in any writing about Churchill and religion is in disentangling his religious and political views. There are politicians where this is inadvisable, as well as impossible. Smith, in his first chapter, takes the time to look at a number of them. For Wilberforce, Shaftesbury, Gladstone, Baldwin, Thatcher and Blair, religious views played a big role. The phrase “We don’t do God,” was inappropriately applied to Tony Blair by his political Svengali, Alistair Campbell. But Blair and the others saw the Christian religion at the centre of their beliefs. What Smith tries to do, generally successfully, is to address two questions: Did Churchill have any religious convictions? If so, how did they affect his policies?

The first problem is more and more apparent in this day of  #MeToo and Black Lives Matter. It is the whole issue in understanding the society in which historic individuals were brought up. What influenced them in their formative years? Nobody, for example, can fully understand Margaret Thatcher without comprehending her childhood and her relationship with her father.

Anybody who was brought up in what I might call an upper-middle class milieu of boarding school between the ages of 7 and 18 will have gone through certain experiences that will have affected all their lives. Separation from families, except for the school holidays, when your father was probably still working, was a dominant factor.

So too was religious indoctrination. At both of my boarding schools we had morning and evening prayers, both of which involved singing a hymn. My prep school (8-13) held two Sunday services, morning and evening, daily reading of the Bible in the evening, and each Sunday a large chunk to learn by heart, and write out on Monday. At my public school (13-18) life was a little less formal. There was a morning Sunday service. Confirmation, usually around age 15, meant Communion services probably every month. Communion on Sundays was voluntary, but many attended. The hymns we sang, usually from Hymns Ancient and Modern,[1] became part of our lives, and indeed remain so.

Smith conveys Churchill’s experience. For my generation, and those centuries before it, our brains were imbued with the matchless prose of Cranmer’s Book of Common Prayer, and the King James Bible. The language, the ideas and the Protestant theology were ingrained into us, however much we might later question them. Add to that the cadences of Shakespeare, which was, and still just is, compulsory for British schoolchildren to study. There are certain words and phrases which sit in the mind and appear unbidden. If like me you were lucky enough to have an inspirational English teacher, poetry and novels add to the mixture. Churchill went through precisely this education both at his prep schools and at Harrow.

Gary Smith approaches Churchill’s religious beliefs chronologically. While he frequently denigrated his scholastic education, he was a much better student than he allows. In school he acquired a writing style that was not to change much all his life. In India, he really spread his academic wings. A better example of an autodidact is hard to find. Young Winston read widely and deeply, often corresponding with his old Harrow head master, Bishop Welldon.

Smith often seems content to count the times Churchill in his speeches mentions God or Christian principles. The fact remains that by the time he left the Army, Churchill had a formed set of beliefs. He believed in what he called in My Early Life “The Religion of Healthy-Mindedness… If you tried your best to live an honourable life and did your duty and were faithful to friends and not unkind to the weak and the poor, it did not matter much what you believed or disbelieved.”[2] This remained the basis for his spiritual life.

Churchill acknowledged an overseeing being—call him God, Fate or Providence. Yet it often appeared that the latter’s main function was to look after the physical safety of Winston Churchill. Certainly, over the course of his life, he put the Supreme Being through his paces. Andrew Roberts wrote: “Few people in history could have brushed against the cloak of the Angel of Death as often as Churchill, yet he survived until his 91st year.”[3]

“The Tory Party at prayer”

In aiming to become a politician, it was hardly wise publicly to reject the faith of his adopted party. After all, the Church of England was often seen as “the Tory Party at prayer.” That explains why Churchill never disassociated himself from the Anglican Church. His speeches, whether from Tory or Liberal benches, are often filled with references to God and Duty. Churchill recognised that his countrymen were mostly Christians; and that, therefore, praying to God was natural to them.

Anybody who has served in the armed forces will recognise truth in the statement “There are no atheists in trenches.” That applies to the vast majority of service people of whatever branch, religion or country. Churchill too recognised this. His speeches throughout World War II were filled with biblical references and Christian allusions, which were designed to appeal to the most basic beliefs of his countrymen, as well as to those of his Allies and even to those under Nazi occupation. Smith manages to explain all of this, while quoting from numerous sources to back up his points.

Frankly, Smith could have done with a better editor. There are a number of literals and split infinitives, which annoy this old schoolmaster. Many mistakes, omissions and infelicities could easily have been put right. I cannot believe, for example, that Shaftesbury had a “primary care-giver”; rather he had a nanny, as Churchill did. Casualty figures are a notoriously difficult area, but it is palpably untrue that three times as many British died in the First World War as in the Second. The figures are respectively 700,000 and 384,000.

As Chancellor of the Exchequer (1924-29) Churchill worked closely with Minister of Health Neville Chamberlain. This demonstrated his continuing involvement in social reform, which did not cease before World War I. Churchill’s cry, “Money, money, money [and] the prayer ‘give cash in our time’…the sordid, evil tendencies of the day” could well have had attached to it some reflection on today’s world, both in Britain and America.

The River War does not include fighting in India. Hap Arnold was not a British general; he was the Chief of the U.S. Army Air Force. Jan Smuts collaborated with Churchill in both world wars, not just the second. He was in the War Cabinet in both conflicts, and signed peace treaties after both. Discussing Churchill’s appointment of Archbishops of Canterbury, Smith explains that Geoffrey Fisher had been head master of Repton. But he omits to say that William Temple had also held that position, and indeed was Fisher’s predecessor. Repton itself is not a day school, but purely a boarding school. Hensley Henson, bishop of Durham, is consistently referred to in the text as Henley Henson.

It’s true that Brendan Bracken was a keen supplier of names for appointments to important posts, particularly ecclesiastical positions. It was, however, the patronage secretary Anthony Bevir who made recommendations to the Prime Minister—and rarely got them wrong. Smith’s figures on the V2 missile are inaccurate. The Germans fired 1402 not 1190, mostly at London. Smith ignores the V1: 9251 were fired at Britain, and 2515 arrived, causing 6184 deaths.

When discussing the possibility of nuclear warfare, Smith mentions Churchill reading Nevil Shute’s On the Beach. He then cites seven more novels and films, without any indication of whether Churchill read or saw them. Smith must know that funeral choirs do not sing “songs” but anthems. These may well be nit-picks, but they leave one worried about the authenticity of some references. Finally, endnotes and source notes refer only to U.S. titles and editions. In any British edition there should be UK titles and dates.

In his conclusion, Smith starts with a tremendous description of Churchill’s funeral. It all strikes a chord with me, for I remember watching it on black and white TV at school. I was particularly impressed by the London dock cranes dipping their booms as the funeral launch Havengore went past. It is worth pointing out that Charles de Gaulle was not there as “prime minister,” but as President of France. (In contrast with the splendid uniforms of others, he was dressed simply as a poilu.)

One of the best histories of 20th century Britain is Robert Blake’s Decline of Power (1985). He begins in 1915, seeing Gallipoli as the moment when our fortunes started to decline, and 1964 as his end point as it is closely aligned to Churchill’s death. This he saw as the end of an epoque, and the funeral as mourning not just the loss of a great man, but a lost past.

Smith finds it difficult to distinguish between religious and political views. They are, interconnected, but need to be disaggregated. Only towards the end does he manage to do so. He is firm that Churchill was not really a Christian, invoking Churchill’s famous description of himself as a buttress of the Church, supporting it from the outside. He is clear, however, that Churchill was a believer in a faith. That faith was at the heart of his appeal  in the Second World War.

His belief system was summed up very well by Churchill himself, in My Early Life:

I have always been surprised to see some of our bishops and clergy making such heavy weather about reconciling the Bible story with modern science and historical knowledge. Why do they want to reconcile them? If you are the recipients of a message which cheers your heart and fortifies your soul, which promises reunion with those you have loved in a world of larger opportunities and wider sympathies, why should you worry about the shape or colour of the travel-stained envelope; whether it is duly stamped, whether the date on the postcard is right or wrong?… I adopted quite early in life a system of believing whatever I wanted to believe, while at the same time leaving reason to pursue unfettered whatever paths she was capable of treading.[4]

Arguably, this passage expresses perfectly all we need to know about Churchill’s view. Smith goes into greater depth, but ultimately comes back to the same point. As an examination of Churchill’s views on religion this is an excellent account. Attempting to prove whether he was a Christian or not is in the end a sterile debate. He was a great human being. That is all that needs to be said.

Robin Brodhurst, a retired schoolmaster and a military historian, is author of Churchill’s Anchor: The Biography of Admiral Sir Dudley Pound. He recently edited The Bramall Papers, a volume of documents and speeches by Field Marshal Lord Bramall, former Chief of Defence Staff and Chief of the General Staff.