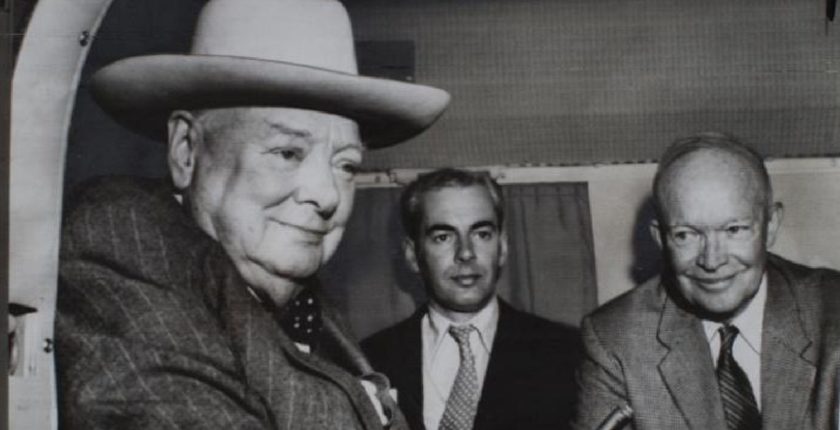 Sir Anthony Montague Browne KGMG, CBE, DFC (1923-2013): “worthy to sit with other heroes of martial romance at some eternal Round Table.”

At the moment “AMB” is in the news in Britain, over the kind of story that always exercises tabloids and social media—eloquently addressed by Andrew Roberts in The Sunday Times.

I honored and loved Anthony for what he did. He sacrificed a promising career to be Sir Winston Churchill’s confidant and protector during the last years of his life—and brilliantly recalled the ​experience in his 1995 memoir, Long Sunset. So I have nothing to add to the present news story, ​except to recall ​what I wrote when ​Anthony died​. It is always worth remembering what really matters.

When we met, Anthony and Shelagh Montague Browne lived in the charming hamlet of Bucklebury, Berkshire, their pretty white house visible from a good distance off. I complimented him on the choice of location: “You can see brigands coming for half a mile. . . . I feel almost invulnerable.” (Returning from Sir Winston’s funeral to his London flat in 1965, he had found it burgled.)

To a Churchillian who was also a motoring writer my treat was double-barreled. Shelagh’s first husband was the racing driver Lance Macklin, who for years had been blamed for causing the terrible crash at Le Mans in 1955, which had killed Pierre Levegh and eighty spectators. Shelagh disputed the prevailing opinion that Macklin was to blame. Driving a relatively slow Austin-Healey, he had swerved to avoid Mike Hawthorn’s Jaguar, a defensive move which sadly led to the greatest loss of life in racing history. Later at the Tourist Trophy, Macklin had crashed his car to avoid another pile-up, and Shelagh had prevailed on him to retire from racing. She gave me a fascinating insider’s account of auto racing in the Fifties.

After Anthony showed me his collection of Churchill first editions, most of them inscribed to him by the author, we sat down to a marvelous dinner which was interrupted by an urgent Churchillian phone call, involving a scandal in the press. The circumstances are irrelevant, but it was interesting that Anthony was the first person the caller referred to for advice—just as Sir Winston had so many times, twenty and thirty years before.

On 25 September 1985, I hosted a dinner for them at the Pinafore Room in the Savoy, London, meeting-place of Churchill’s “The Other Club.” We were joined by Lord and Lady Soames, who had come to pay him tribute. Acknowledging them, Anthony compared himself to “a priest in a small Italian village, getting up to make a sermon and finding not one but two popes sitting there.”

Anthony was only twenty-nine when he met Churchill, yet he quickly fit the description, “a friend is someone who knows all about you, but likes you.” I am not going to recite his life story, but simply offer an act of gratitude. And that begins with what Lady Soames said that night at the Savoy:

I don’t think that when Anthony joined the private office he realised—nor indeed did any of us—that this was the beginning of a very long relationship. That lovely prayer of Sir Francis Drake, that speaks of true glory being not the starting out of something but the finishing of it, is appropriate.1

At first, all right, perhaps you could say it was a plum of a job. People might have thought they would have liked to be in Anthony’s shoes. But the day came when my father, although much beloved and venerable, was past his wonderful prime, was declining in energy and ability. He still wanted to take his part in affairs, but he needed help. He needed a wise friend, and a knowledgeable one, who would guard his reputation—who would guard every step he took. Anthony remained to bear the burden of the day, to be his friend and support throughout his sadder, declining years. And it cannot always have been fun, or particularly interesting actually, for a bright, bubbly young man with a future.

So I am glad to have the opportunity to say this; to say from the family, and for all who revere my father’s memory, that we all owe a great debt. My parents both knew it, and I really think, Anthony dear, that we in the family knew it. I want everybody else to know it.

He was always a steadfast friend, addressing Churchillians on many occasions and lending his advice or reaction when our work touched on his experience. Reviewing a “brightly coloured, if somewhat elliptical book” by one of Sir Winston’s staff, he wrote: “It was all too easy to succumb to irritation with X at times, but his devotion to Churchill was genuine, and the Boss I think had a real affection for him. It was Sir Winston’s inevitable reaction to stand up for any member of his entourage who was under attack. As Lady Churchill once said, looking at me rather pointedly: ‘Winston is always ready to be accompanied by those with considerable imperfections.’”

His self-deprecating quality stood Anthony well. The son of a distinguished Army colonel, he had steadfastly refused to join the Officer Training Corps until the outbreak of war in 1939, which he had been sure would never come. In 1941, as soon as he was old enough, he joined the RAF. Like everything else he did, Anthony wrote this off as no great shakes. Of his maiden flight in a Tiger Moth he recorded his instructor’s comment: “You didn’t land, you arrived. But these are hard times, so go off and do a little flying on your own.” He learned enough to pilot Beaufighters, and to win the DFC for his skill in attacking Japanese lines of communications. He was seconded to Churchill in 1952.

Like former Churchill secretary Grace Hamblin, AMB was quick to seize upon any inaccuracy in my work, and let me know about it. When a few years ago I published a stylized artist rendering of Battle of Britain aircraft, he was quick to dub it a monstrosity:

“The aircraft at extreme right is presumably a Hurricane, but it is given the Spitfire’s elliptical wings! The other two aircraft have a portly profile, four guns instead of eight, and appear to be powered by six-cylinder engines instead of twelves. Ugh! There are literally thousands of photos of those aircraft. Might not the artist have seen one of them? Admittedly most of those who flew them are dead. But not all!”

Not dead yet! I reminded him of Mark Twain’s crack, “Reports of my death are greatly exaggerated.” But I became afraid to enquire too closely. Friends get to a certain age and you don’t like to ask for details. He died 1 April 2013, of complications following one of those body part replacements he once told me he would never need, for he was always fit. Yet he reached 89—a good number, only one short of the Boss he loved.

His book Long Sunset, a memoir mainly on his years with Churchill, captured the inside stories which had enthralled us years before. He didn’t miss a detail. Churchill’s luncheon for the Crown Prince of Japan went “perhaps too swimmingly, for when the time for toasts arrived, the Prime Minister rose and proposed the health of the Emperor of Japan before that of the Queen. I choked on my glass of port and saw Rob Scott, a senior Foreign Office official who had been captured and grossly maltreated by the Japanese, turn pale with mortification. It was of course an aberration which had the virtue of greatly pleasing the Japanese.”2

There are passages in books by gifted writers that tend to stamp themselves on one’s memory. In Long Sunset, one of these is at the Churchill funeral. It began with characteristic whimsy:

“As we filed past the grave for the last time before it was closed, I was astonished to see a small and not particularly distinguished row of medals lying on the coffin. I could only suppose that it had fallen from the chest of one of the military coffin-bearers, and I wondered if it would remain there to perplex archaeologists of many centuries hence.”

Coming to his final reflections, AMB quoted the Boss’s words on the death of Richard Coeur de Lion: “…worthy, by the consent of all men, to sit with King Arthur and Roland, and other heroes of martial romance at some eternal Round Table.” He finished with the thought that appeared in one form or another in every talk I heard him give:

“I tried to say some silent prayers for that brave and generous soul, but they were choked and confused, and came to nothing. I could not mourn for him: he had so clearly and for so long wanted to leave the World. But I was submerged in a wave of aching grief for Britain’s precipitous decline, against which he had stood in vain.”

William F. Buckley Jr. said: “Expressions of gratitude can be most awfully trying to the ear of an audience, generally captive. But the act of gratitude nowadays is probably more neglected than overdone.” It cannot be overdone in this case.

For Anthony Montague Browne I have no hesitation in repeating the valedictory fanfare Randolph Churchill gave Brendan Bracken: “You were always on the good side: you loved truth and honour: you hated cruelty and injustice: fare thee well, my gifted, true and many-sided friend.”

1 “Oh Lord God, when Thou givest to Thy Servants to endeavour any great matter, grant us to know that it is not the beginning but the continuing of the same until it be thoroughly finished, which yieldeth the true glory.” Quoted by Margaret Thatcher in her speech to Congress, 20 February 1985