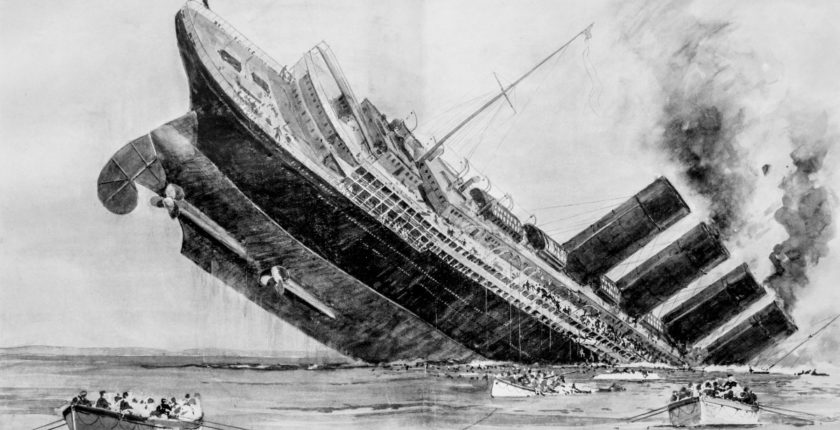 Was Lusitania set up?

The first chapter of Nigel Hamilton’s book, The Mantle of Command, states that the Lusitania was an “ill-fated American liner.”  He leaves the impression that Churchill, then First Lord of the Admiralty, had played a role in the sinking in order to get the United States into World War I. Any comment? —C.C., Culpeper, Va.

RMS Lusitania was British, not American, operated by the Cunard Line. On the fatal voyage she did carry 139 Americans, 128 of whom lost their lives, along with 1,070 others. On 7 May 1915 the liner, inbound from New York, was eleven miles off the Old Head of Kinsale, Ireland on 7 May 1915. The German submarine U-20. She sank in 18 minutes.

It was well known during the First World War that the British were shipping arms on passenger liners. The German government issued warnings that they were liable to be sunk. It is also known that Churchill hoped German attacks on merchant shipping would bring America into the war.

Contrary to conspiracy theorists, however, Churchill did nothing to cause the sinking. He was not even at the Admiralty in the days leading up to the event. Indeed the Lusitania had been warned of submarine activity in the area. Mistakes were certainly made by her captain, William Turner. But there was no conspiracy to put her in danger.

George Will correctly described the event in National Review. A highly detailed examination of the subject was written by the late Professor Harry Jaffa in the book Statesmanship: Essays in Honor of Sir Winston Churchill (Durham, N.C.: Carolina Academic Press, 1981). A copy of his article is available from the Churchill Project by email.

Readers may wish to refer to “Sinking the Lusi,” Chapter 13 of Winston Churchill, Myth and Reality: What He Actually Did and Said.  It covers the prominent conspiracy theories, led by historian Colin Simpson in 1972. Simpson wrote of a supposed Admiralty meeting, with Churchill, two days before the sinking: “On the map were markers denoting the U-20, [the old cruiser HMS] Juno, and Lusitania.” (We are meant to believe British knew exactly where all three were, including the enemy submarine.)

The Admirals mentioned Juno‘s slow speed and recommended Churchill send destroyers instead to escort Lusitania. Here, Simpson writes, “the Admiralty War Diary stops short, perhaps understandably, as it was here the decision was made that was to be the direct cause of the disaster…. The Admiralty signaled Juno to abandon her escort mission and return to Queenstown…The Lusitania was not informed that she was now alone.”

Quoting from Myth and Reality:

The “Admiralty War Diary” in this melodramatic paragraph appears nowhere else in Simpson’s book, not even the bibliography. No historian has found it; nor a record of the Admiralty meeting. Nor was it Churchill’s role to make operational decisions.

The chief cause of Lusitania’s loss was Captain Turner’s decision, after sighting the Irish coast, to proceed northward at reduced speed to “make the tide” at Merseyside, as he would have in peacetime. At his normal cruising speed, chances of a successful torpedo attack would have been greatly reduced. Alternatively, since he had the time, he could have headed out to deeper waters, maintaining speed and further reducing the danger. There was no advantage and every danger in slowing down.

It might be argued that the Admiralty set up the liner by refusing a destroyer escort. But destroyers were the one class of warships in short supply. Lusitania historian David Ramsay noted that many destroyers, instead of guarding merchant shipping, were involved in the Dardanelles operations. Ramsay, writing in 2004, confirmed the findings of historians Thomas Bailey, Harry Jaffa, Stephen Roskill and David Stafford, “who are at one in rejecting any conspiracy, by Churchill or anyone else.”