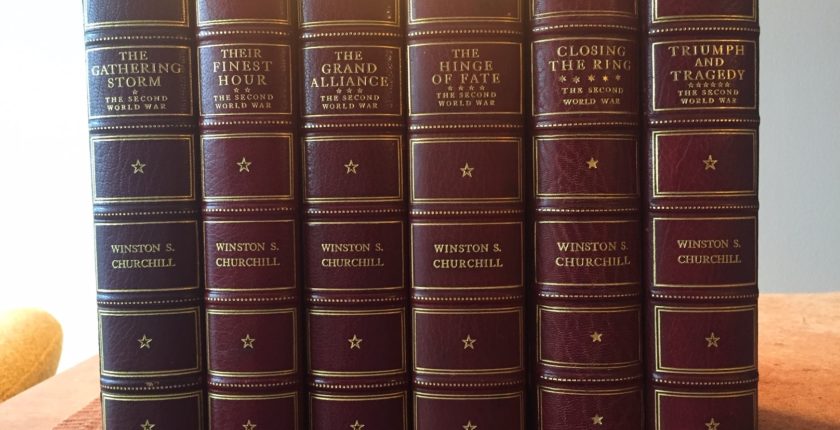 Both Ronald Cohen’s Churchill Bibliography and Richard Langworth’s Connoisseur’s Guide to Churchill’s books mention a limited presentation edition of The Second World War. That edition, of 100 leatherbound sets, was produced by Cassell, the London publisher. Was there a similar edition in America? I have a leatherbound set of U.S. editions, inscribed by Churchill to Harry Scherman, co-founder of the Book of the Month Club. Was this one of a limited edition, or did Mr. Scherman have this set individually bound? —Ron Czerwien, Madison, Wisconsin

No counterpart of the Cassell limited presentation edition was produced by either the U.S. trade publisher, Houghton Mifflin, or the Book of the Month Club. Thus, either Mr. Scherman or the BOMC must have had this set specially bound. But your question is fascinating, since it raises several bibliographic questions and the BOMC’s important publishing role.

Your set is either a first American trade edition (Houghton Mifflin, Boston) or a Book of the Month Club issue. In their original bindings, it’s easy to distinguish between the two. BOMC indicia include a debossed dot or square on the lower right corner of the rear boards, and the absence of both headbands and top page edge staining. The front flap of dust jackets carries either a price (for the trade edition), or the name of the Book of the Month Club. (While BOMC identified its work as an “edition,” it was technically only an “issue.”)

In my Bibliography, the American edition (Cohen A240.1) is the true first edition, since the first volume, The Gathering Storm, was published on 21 June 1948. The Thomas Allen Canadian issue (A240.2) was also published on 21 June. The BOMC issue (A240.3) was essentially available on that date, although it was not mentioned publicly in the Book of the Month Club News until the July issue. Fourth came the Cassell British edition (A240.4), which was not published until 4 October.

My Bibliography addresses and catalogues the voluminous American issues. In 1969, Houghton Mifflin responded to a query from English bookseller Harold Mortlake: “The six volumes of this title represent a bibliographical nightmare. We published these six volumes in different years, simultaneously with the Book of the Month Club.” The Club used three different manufacturers to meet the demand. They were the H. Wolff Manufacturing Company, the Haddon Craftsmen and the Kingsport Press. “Four sets of identical plates were used,” Houghton Mifflin continued. “The first edition could be considered any one of these sets at either the Riverside Press [who manufactured the trade edition] or the three manufacturers for the Book of the Month Club.”

Bibliographically speaking, any American volume with a date on the title page, whatever the printer, is a first edition, provided that the title page verso indicates no later printing. Later printings were not always indicated, But I have certainly seen some with “THIRD PRINTING” on the verso. Consequently, in my view, a date on the title page (1948 for The Gathering Storm) suggests the volume is a first edition. Books were printed simultaneously by the four manufacturers. This does not mean that Book of the Month Club issues are as desirable as the Houghton Mifflin trade issue.

Harry Scherman and his books

Isaac Harry Scherman (1887-1969) was born in Montreal and attended high school in Philadelphia. His classmates included the literary critic Alexander Woollcott, and the actor Ed Wynn. He completed his education at the Wharton School and the University of Pennsylvania Law School. Scherman joined the advertising agency J. Walter Thompson. Scherman’s literary accomplishments were notable. His Little Leather Library (1916-23) produced twenty-five million miniature classics. His Book of the Month Club (1926 to date) has published over 100 million books. Having made the transition to the digital age, the BOMC is still in business.

While the Scherman volumes are not part of an equivalent to the Cassell presentation volumes, that does not diminish their importance. BOMC sold more copies of The Second World War than any other publisher. Of Houghton Mifflin’s 530,000 sales of The Gathering Storm by July 1951, 385,000 copies (almost 73 percent) were to BOMC subscribers. Of course, the absence of the original binding and dust jacket makes it difficult to judge whether these volumes are trade or BOMC issues. It is however likely that they are first printings, since all the title pages bear the publication year.

(A personal note: like Scherman, I was born in Montreal. And in 1965, when I returned from a year in England, I took The Second World War home. It was my BOMC sign-up premium—the first Churchill acquisition in what has since become a lifetime avocation.)

Almost certainly, Harry Scherman did not personally conduct negotiations for BOMC’s purchase of rights to The Second World War. He probably had little direct contact with Churchill (although we are searching the Scherman Papers and Churchill Archives for any correspondence). Nevertheless, Churchill appreciated the major role the Book of the Month Club played in the publication of his most famous work.

I believe the BOMC negotiations were conducted entirely by Houghton-Mifflin. They were the Boston publishers recommended by Emery Reves, Churchill’s literary agent, moments after the negotiations for the American serial rights were concluded with Henry Luce, the publisher of Time and Life, in November 1946. Luce’s rivals included William Chenery of Collier’s, the popular American weekly, where Churchill published forty-eight articles between 1901 and 1947; and with Helen Reid of the New York Herald Tribune.

Although Viscount Camrose (William Berry) was the formal decision-maker on the serialized memoirs, Reves played a key role. Making a special trip to New York, Reves went to the Luce apartment and was greeted by his wife Clare Booth Luce. Her husband was sleeping, having just returned from China. Luce grumbled at being awakened but Reves was unabashed. “All I can tell you is that in forty-eight hours it will be decided. You can talk to me today or tomorrow, but after tomorrow you won’t get it.” Luce bid over $1 million for the American serial rights. Both Reves and Camrose were devoted friends of Churchill. Neither took any commission, and they even paid their own travel expenses. (The remarkable story is in Martin Gilbert’s Winston Churchill and Emery Reves, the subject of an upcoming article herein.)

Houghton Mifflin acquired the American book rights for $250,000—in retrospect the publishing bargain of the decade. Emery Reves had flown to Boston to set up the deal, which was concluded by Camrose. It was Henry Laughlin, President of Houghton Mifflin, who negotiated the deal with BOMC—but very late, in early 1948. Moreover, BOMC insisted on making the deal only one volume at a time, not for the entire set. (Originally Churchill contemplated five volumes, not six.)

We cannot underrate the importance of the H-M/BOMC arrangement. While there was no direct link between Churchill and Harry Scherman, the Book of the Month Club was an extremely important player in the commercial success of The Second World War. In the circumstances, I have no doubt that Churchill would have been pleased to inscribe a set to Scherman.

Though this is only conjecture, I expect that either Scherman or his company, the BOMC, arranged for the binding of the first volume, which Churchill signed, and the binding of successive volumes as they appeared. Scherman was sixty-one in 1948, the date of the inscription. No other volumes were signed. They were bound to match, except for Volume V, which was almost but not absolutely identical.

Ronald I. Cohen MBE is the author of the Bibliography of the Writings of Sir Winston Churchill (2006) and the editor of The Heroic Memory: The memorial addresses to the Rt. Hon. Sir Winston S. Churchill Society, 1990-2014 (2016). In 2014, Mr. Cohen was invested as a Member of the Most Excellent Order of the British Empire for his services to British history. A co-founder and president of the Sir Winston Churchill Society of Ottawa, he writes and speaks regularly about Churchill. The Hillsdale College Churchill Project now houses his collection of works with Churchill contributions, forewords, prefaces articles and audio recordings of his speeches and broadcasts.