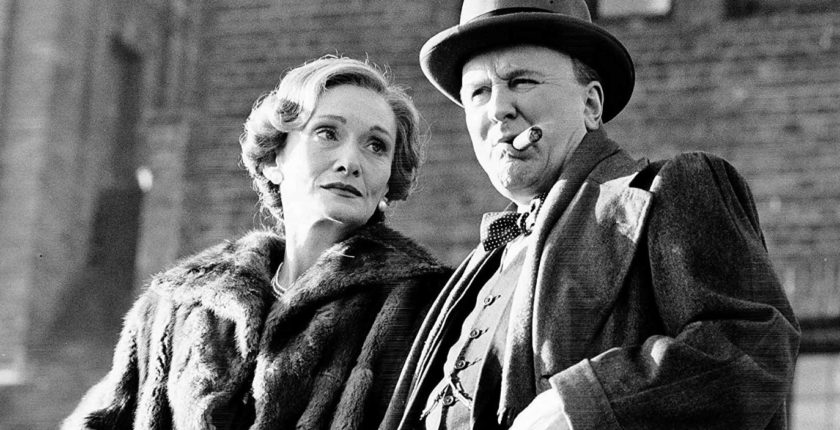 Grace Hamblin’s portrait grew all the time in my mind. I visited the costumiers and discussed padding — the tailors made suits, bow ties arrived. Panic was kept resolutely at bay, but it was seldom more than a short distance away. And so eventually we began work.

We repaired to Blenheim Palace. A helicopter bearing a camera was to shoot me gazing up at the Marlborough Column, then lift away to reveal the majesty of the distant palace. With the wind it was almost dashed against the column itself. That scene was abandoned until nearly nine months later.

Jo, the Countess of Onslow, a wartime secretary of Churchill’s, came to Blenheim to seek Robert Hardy. She gave me a boost. She came upon my back view and said it made her gasp. That was the day I went to director Ferdinand Fairfax, and said I’d had a wonderful idea. Let’s shoot all the Churchill scenes from behind, so no one would ever see my face! Imagination is so much more powerful a force for recreation than all the prosthetician’s or the actor’s arts. But Fairfax only said “No” to that.

In fact, I did not worry very much about my face. I got up at five every shooting morning and shaved my head in the bath. I used a contrap­tion of two mirrors so that I could see the back.

Then after breakfast I’d go to the make-up caravan where they stuck a little top hair on the bald pate. It’s often known as a “rabbit” in the profession, or a “ferret.” Then I put some little rubber tubes in my nostrils to try to broaden the nose. They caused considerable trouble on very cold days, night particularly. They began damp, and then froze. You can imagine that the result was extraordinarily uncomfortable.

Finally I would insert my “plate.” My plate was a matter of controversy. I’d had the idea that as Churchill had had to conquer a speech defect. So I ought to give myself such a difficulty to overcome.

I went to my dentist, an excellent Norwegian, who threw himself into the task, did some research, took many impressions. He came up with first one, then a second little plate which tended to make me lisp. It also tended to make me incomprehensible.

But I stuck to it and battled on. I’m still not sure whether it was a sensible or a thoroughly silly idea. But when the second plate arrived it was a more subtle affair than the first and I felt it was a help. Alas, it was lost in the sands of Monument Valley, Utah. I’m left with the prototype or Mark I “spit,” which I lately haven’t used at all.

There then began, what Grace Hamblin described as the “rape of Chartwell.” I’m sure it dismayed everyone connected with Chartwell or the Churchill family. The film company arrived with its lorries and lights and its catering corps, and its designers to take the house back to 1929. There were cables in all directions, noise, and a great deal of mud. Robert Hardy in the Wilderness. It all made me think of Churchill’s 1935 description of the ar­rival of the earth mover for the making of the upper pond.

I think myself it was a fairly gentlemanly rape. The restitution agreement with the National Trust was pretty severe, as it should have been. But there we were, through a cold November, December and January, and my bungs froze in my nose—and so forth.

“Rushes,” the viewing of material shot the previous day or days, happened in the cafeteria at Chartwell. Nothing would persuade me to attend. Usually I regard such punishment as benchwork—running your finger over your work, seeing how to improve it. But in this case I simply dared not go. I could by now just persuade myself that I was being Churchillian. If I had seen what I was actually like, the whole frail structure might have collapsed.

After some weeks Fairfax said I ought to attend rushes that night because he thought I’d be quite pleased. Luckily it was a darkly lit scene and I couldn’t see much. What Sir Winston called “appropriate medical comforts” eased the acute pain. Thereafter I braved the rushes regularly, with a cold enough judgment to improve my input marginally from time to time.

I could, but won’t, wander happily on through the rest of those months of filming. Happily, because it was in essence a joyous time, although a time of some fear. There was the wonderful day when Lady Soames appeared in the hall. “Robert Hardy, I believe?” I had a free moment and offered to be her guide through the corridors of sacrilege. Then, sensing shock, I suggested a glass of something in my caravan.

There we went and there Mary Soames quite approved of my suit and my “bow tie arrangement.” She definitely approved of the Churchill ring, which Garrards had made for me with the greatest accuracy. She told me that when her father was old the ring grew loose. The children would slip it off his hand and hide it. He pretended not to notice, until the right moment arrived for a dramatic roar. When she had gone, we sent her a telegram: “A bright gleam has caught our enterprise and warmed and cheered all our hearts.”

The wardrobe people came and asked if Robert Hardy would try on the blue velvet, gold monogrammed slippers. They had been copied from Churchill’s own, and I’d need them for the next few days. Alas, they were like boats. Elastic was tried; nothing worked. At that moment into the room came the curator with a pair of slippers in her hand. “There are these.” They were the originals. I tried them on. They fit. With the utmost care I wore those slippers until new ones came from London. In a way, that was the peak of my experience.

For all the re-dressing of the rooms that we undertook, a great deal was left unaltered. One of my particular joys was to roam about, lighting upon photographs I had never seen, finding a drawing of Churchill as a young man. I would gaze at them in an attempt to find a way further in. I hoped to detect a look or an action I might be able to suggest.

By the end, in a curious manner, I felt part of the place. I shall always look back on that time—which I know caused heartburn to many—with rare pleasure and a very profound sense of having been both lucky and privileged.

In America the approach is different. I was not left alone to get on with it—I was “taken over.” A make-up was devised which took 4½ hours to put on and 1½  hours to take off. For much of the time I felt lost and invisible, and faintly foolish behind it.

In the “Wilderness Years,” mostly with my own equipment, I managed a performance which was more like my own grandfather than it was like Churchill. But a performance of my grandfather bearing Winston Churchill firmly in mind! In America, if I stood stock still and flexed not a muscle, I daresay I looked like a waxwork of Winston Churchill. But to some extent the lines to my grand­father—lines to reality—were cut.

After 4½ hours in the make-up chair I did 1½ hours solid monologue. Getting that inside the head was a painful process. It gave me, upon achievement, the feeling of having done something remarkable. Of that hour and a half there is a good deal that I am not proud, though there are bits of which I am not ashamed. And, as always, having gone part of the distance, I was tempted to try again.

And on and on

Later came Robert Hardy as Churchill in the multi-million dollar epic, “War and Remembrance.” A lovely man directed it, Dan Curtis. His particular mission was to record the horrors of the Nazi creed for the young who never knew, and think they may have been exaggerated. I met him in Cambridge on my first filming day, at the Union. Now it was nearly five hours in the make-up chair. (It’s hard enough to play a mouth organ, let alone Winston Churchill.)

Dan greeted me and swept his hand over a crowded “House of Commons” for which the Cambridge Union was standing in. He said, “Robert Hardy, you are there at the Despatch Box—am I right?” “No,” I replied, “you’re wrong. That’s the other side. This side’s the Opposition.” Dan glared at me. I bit into my cigar. Then he said, “Right, rejig, relight.”

After that I only murmured that there were far too many in uniform on the Commons benches. But later in the States, I arrived for a chiefs of staff conference scene and saw two British sailors with moustaches. This time I was listened to. In fact, for better or worse, Mr. Curtis gave me a great deal of rein.

My happiest moment was at Long Beach, filming the meeting of Roosevelt and Churchill aboard HMS Duke of York. Actually it was on a battleship almost of the same vintage, USS New Jersey. I went up the gangway in blue reefer and cap and five hours of make-up. A U.S. rating with a smile of certainty on his face, saluted and said: “Well, sir. No mistaking who you are. Welcome aboard, Mr. Roosevelt!”

The future continued to tie me to this great task. Whoever of the Churchill family I have met have been kind and generous to me beyond expectation. Once, in cahoots with Churchill’s granddaughters Celia and Edwina, I embarked on a musical, “Winnie.”  We were all determined it should be a good thing and a right thing. I even asked for a “number.” I do not believe Winston Churchill would have forborne to sing if others were singing round him. Alas it closed too soon.

Several times again I attempted to climb the peak. I came away from my mountain climbing with a little more understanding, perhaps a few more skills. But mostly I came away with a radiant and profound affection for the mountain himself. Playing him was one of the best things that has ever befallen me. I shall never look down from that peak—but as long as I live I shall delight in gazing upwards towards those towering rocks.

Grace Hamblin told me of an evening during the war when she was called in to take dictation. The gestation had been long on this occasion. As she entered the room Mr. Churchill was sitting there surrounded by notes and pages. He said, “Come in, Hambone, I think I’ve laid an egg.” He went on to dictate one of the great war speeches. He had meant that he had a suspicion he’d done something pretty good.

In my profession “to lay an egg” means quite the opposite. I only pray tonight that I have not laid a noxious egg in anybody’s lap.

Hillsdale’s Center for Constructive Alternatives is the sponsor of one of the largest college lecture series in America.