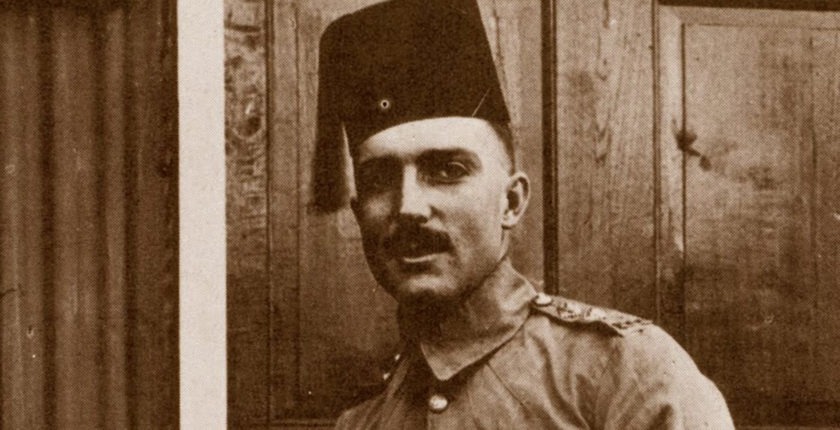 Q: Erica L. Chenoweth’s excellent review of Dockter’s Churchill and the Islamic World, mentions the advice Churchill and other ministers involved in the Middle East received by “men on the spot,” like the intelligence officer and military strategist, Colonel Richard Meinertzhagen. I have read mixed reports on Meinertzhagen and would appreciate your views on him and his role in settling the borders of the Middle East. —M.H., Westfield, N.J.

A: Col. Richard Meinertzhagen CBE DSO (1878-1967) was a Harrovian, like Churchill, and one of the swashbuckling characters Churchill took a shine to. Meinertzhagen has come in for criticism over the years, most recently by revisionist historians. A soldier, intelligence officer and ornithologist, he had a distinguished military career in Africa and the Middle East. In 1917 he credited himself with the famous “Haversack Ruse.” During the Sinai and Palestine Campaign, according him, he let a haversack containing false British battle plans fall into Ottoman military hands, resulting in a British victory in the Battle of Beersheba and Gaza. Early biographers trumpeted his achievements; later ones call him a fraud and a charlatan and accused him of lying to enhance his reputation.

Erroneously presumed to be Jewish because of his staunch pro-Zionist views, Meinertzhagen in 1921 was appointed by Churchill as military adviser to the Middle East Department, which Churchill organized to administer British occupied areas of the former Ottoman Empire. He took a diffident attitude toward his fellow Harrow Old Boy, saying Churchill fancied himself the Duke of Marlborough and “had to be managed,” which he claimed he knew how to do. He would sometimes shoot from the hip, drawing a rebuke from his boss:

Please caution Colonel Meinertzhagen that he is not to express to the War Office opinions in regard to military matters contrary to my policy. Yesterday the Secretary of State for War told me that Colonel Meinertzhagen was quite agreeable to the removal of the armoured cars from Trans-Jordania. I have definitely forbidden this, and it is wrong for any officer in the department to give to other departments opinions contrary to my decisions.1

​The pro-Zionist Meinertzhagen nursed a mutual dislike for the pro-Arab Lawrence, but the two were alike in making enemies by challenging the status quo among the military and officialdom. He appears to have been a brave and valiant officer who often gave Churchill sound advice, such as avoiding support for the post-World War I Greek invasion of Smyrna (modern-day Izmir), Turkey in May 1919:

In reviewing our position in Mesopotamia it is impossible to blind ourselves to the whole political and military problem in the Near East. The solution seems to lie in the following proposal: Mustafa​ [Kemal, the Turkish leader]​ knows our difficulties at home, in Mesopotamia and in Constantinople. He is more than alive to Greek political ferment and military impotence. It is of no use attempting to throw dust in his eyes on thes​e​ accounts. I submit that we, hand in hand with the French, should at once get into touch with him and entirely repudiate the Greek occupation ​of Smyrna.2

​Meinertzhagen was solidly behind Churchill on the concept of a Jewish National Home in Palestine, which Britain had received as a League of Nations mandate following the collapse and dismemberment of the Ottoman Empire. Norman Rose offers an accurate summary of the little-recognized “first partition of Palestine” by Churchill, with the support of Meinertzhagen, in 1921:

[Prime Minister] Lloyd George, however, was in no mood to relinquish any British gains from the war. And once it became clear that Britain was in Palestine (and Iraq) to stay, Churchill applied himself to the consolidation of British rule in those areas with all the energy and vision of which he was capable. At the time, he was under tremendous pressure to revise Britain’s Zionist commitment. An anti-Zionist campaign, laced with strong doses of anti-semitism, was underway in the press, Parliament, and government. Richard Meinertzhagen detected a distinct “hebrophobe” atmosphere emanating from the Colonial Office, while Churchill admitted to his friend, Chaim Weizmann, the Zionist leader, that nine-tenths of the British officials in Palestine were anti-Zionist.3

Churchill’s axe fell as heavily upon Palestine as elsewhere. At Cairo, he set up the emirate of Transjordan—or as he later elaborated, “the Emir Abdullah is in Trans-jordan where I put him one Sunday afternoon”—thereby partitioning mandatory Palestine for the first time. But he would not renege on the essence of Britain’s Zionist obligation, still anchored in the vague phrases of Balfour’s declaration. To the Arabs, he defended staunchly, on moral and political grounds, Britain’s Zionist oriented policy, and made it abundantly clear that “we cannot abandon to Arab fanaticism Jewish efforts.”

​Meinertzhagen’s final view of Churchill after the latter had left office as Colonial Secretary was strongly positive: Meinhertzhagen “paid his chief a great tribute when he recorded in his diary how sorry he was that Winston had gone: ‘He has a brilliant brain and is as quick as lightning,’ acting largely by instinct, usually right, a hard master, tremendously hard-working himself, and expecting the same from his staff.”4