How Randolph Churchill Began the Longest Biography in History 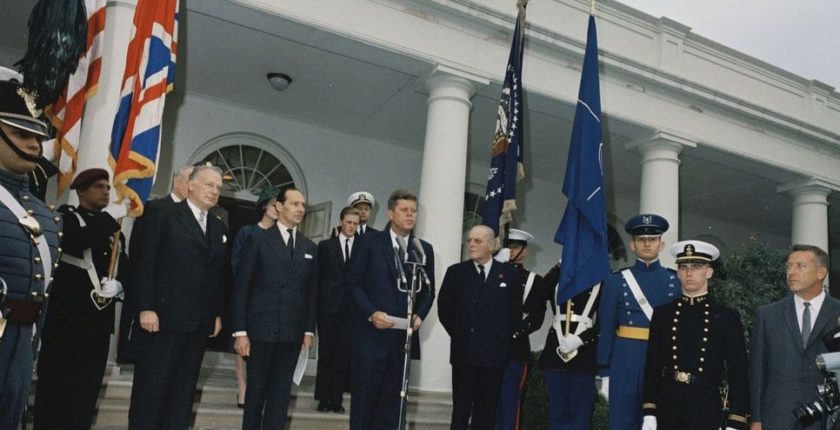 “Randolph Churchill: Present at the Creation,” is from a lecture aboard the Regent Seven Seas Explorer on the 2019 Hillsdale College Cruise around Britain, 8 June 2019.  To play this audio resource, please click here.

Most everybody has an inkling of who Winston Churchill was. But how many know of his son Randolph? How many schoolchildren have heard of him? They should, because Randolph Churchill founded and began the longest biography ever written. In the words of Dean Acheson, he was “present at the creation.”

He was written off recently as “a violent drunk marred by scandals, divorces and infirmity of purpose.” In 1953 he was called a “paid hack.” He sued for libel, won, and published a book about it, What I Said about the Press. What he said about the press is interesting. He said they all had the same opinions, mouthed the same lines, and never criticized each other, because as he put it, “Dog don’t eat dog.” Does that sound familiar?

Paid hack and infirmity of purpose are not charges that stick. Randolph Churchill’s career in journalism lasted thirty-six years. He wrote hundreds of articles, edited seven volumes of his father’s speeches, and published fifteen books, including the first seven narrative and document volumes of Winston S. Churchill, the official biography.

At Eton, Randolph wrote, “I was lazy and unsuccessful…and unpopular.” In October 1930 he quit Oxford and began a lecture tour of America, hoping to recoup his depleted finances. He began writing for the press and was apparently the first British journalist to warn about Hitler in print. In Munich in 1932, he tried to arrange for his father to meet Hitler—size up the enemy, so to speak. But that interesting prospect didn’t come off.

Predicting in print that he would make a fortune and become prime minister, Randolph ran for Parliament as an independent Conservative in Wavertree, Liverpool in 1935. This embarrassed his father, for Randolph split the Tory vote and handed a safe seat to Labour.

Randolph was rebuffed twice more before getting in for Preston, Lancashire. Because of the wartime political truce he was unopposed, but in 1945 he lost decisively. After the war he was twice beaten by Labour’s Michael Foot, while practicing his father’s celebrated collegiality. The two candidates would fling invective at each other in public, then meet for a drink afterwards. Foot later told Martin Gilbert, “You and I belong to the most exclusive club in London: the friends of Randolph Churchill.”

World War II found Randolph in North Africa, performing sensitive intelligence assignments with skill and discretion. Like his father he was absolutely fearless. Anxious for combat, he talked his way into Fitzroy Maclean’s British mission to Tito. He parachuted into Nazi-occupied Yugoslavia, where his exploits were heralded.

In 1944 Randolph’s father met Tito in Naples, saying he was sorry he was too old to land by parachute; otherwise he would have been fighting with Tito’s partisans. Tito replied: “But you have sent us your son.” Tears glittered in Churchill’s eyes. He always declared a “deep animal love” for Randolph, while adding sadly: “every time we meet we seem to have a bloody row.”

After the war, Churchill willed his archive to Randolph, who was now writing books. In 1959, impressed by his son’s  biography of Lord Derby, he invited Randolph to be his biographer. Randolph devoted himself to the job, knowing by then that he had wrecked his body, that the process of disintegration was advanced. Could he finish in time? Randolph wondered.

He housed the archives in a fireproof strong room at Stour, his home in Suffolk. His team of assistants, whom he called his “Young Gentlemen,” would research the papers and have them typed in triplicate. Then they would read the typed version to him, standing at an upright desk which had once belonged to Disraeli. As they read, he would fire questions which they would jot down in the margin to be answered later.

In 1962 young Martin Gilbert came to Suffolk: “I learned at Stour that history was concerned with character and humanity, as well as with facts and achievements….Research at Stour was as far from any dry-as-dust archive or ivory tower as one could imagine. [The questions led me] into a realm I had hardly visited during my undergraduate years at Oxford, the personalities, governments and wars of late Victorian England. After each hour or so of reading, I was expected to disappear, bury my head in the reference books, and emerge with all the answers in place. Sometimes I hardly knew the meaning of the questions, let alone how to tackle them.

Many have wondered how Martin Gilbert lasted so long with this mercurial character. Part of it had to be that Randolph was intensely interesting. “Aside from his heroically dismal manners, his gambling, arrogance, vicious temper, indiscretions, and aggression,” Andrew Roberts wrote, he “was generous, patriotic, extravagant and amazingly courageous.”

Among the many portraits of Randolph, I think the best is by Jacqueline Kennedy Onassis. She recalled 9 April 1963, “a spring day after rain,” when President Kennedy proclaimed Sir Winston an honorary American citizen. “We met in Jack’s office,” she wrote.

Randolph was ashen, his voice a whisper. “All that this ceremony means to the two principals,” I thought, “is the gift they wish it to be to Randolph’s father—and they are both so nervous it will be a disaster.”

Jack spoke first but I couldn’t listen. Then the presentation. Randolph stepped forward to respond: “Mr. President.” His voice was strong. He spoke on, with almost the voice of Winston Churchill. He sent his words across the afternoon, that most brilliant, loving son—speaking for his father. Always for his father. But that afternoon the world stopped and looked at Randolph. And many saw what they had missed…. I will forever remember that as Randolph’s Day.

Randolph died on 6  June 1968. Filling out his death certificate, his doctor didn’t know how to state the cause: “With Randolph the answer is: everything. He’s worn out every organ in his body at the same time.”

His son wrote: “We buried him in Bladon churchyard, beside his grandfather, and his father, whom he loved and revered so deeply. To this day the memory of him lingers on in the hearts of his friends.”