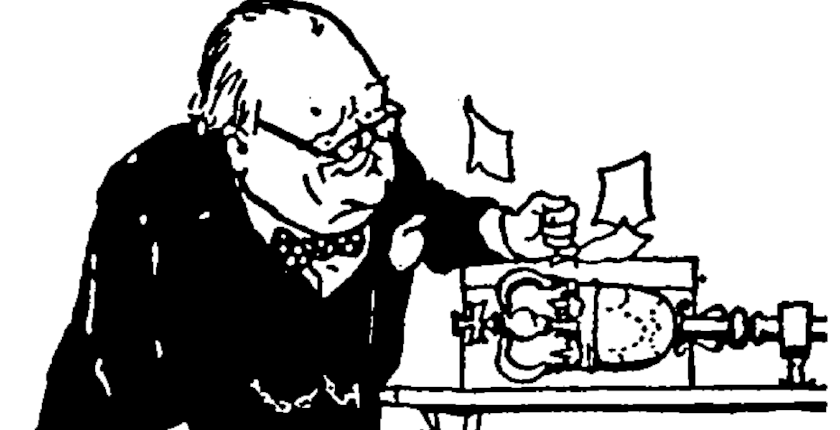 Cartoon by Michael Cummings from Willans and Roetter, The Wit of Winston Churchill, 1955.

Q: ​Churchill by Himself contains a good quip by Churchill when he was accused of inconsistency, in the debate over American vs. British NATO command in the Mediterranean: “My views are a harmonious process which keeps them in relation to the current movement of events.”

The reference given is “House of Commons, 5 May 1952.” But Robert Rhodes James’s Complete Speeches doesn’t include a Churchill speech on that date, and I can’t find the line in nearby speeches. Was he speaking outside the House? It’s such a good quote I would like to be able to pinpoint the source. —A.P., Glasgow

A: The Complete Speeches, while invaluable, are sadly not quite complete, and virtually omit Churchill’s answers during Question Time—which is where this remark originated. It can be found on Hansard Online in the Commons debate of 5 May 1952.

Oliver Lyttleton’s Memoirs of Lord Chandos (1962, 168) contains this delightful account of Churchill’s defense of his inconsistency:

“One of [Churchill’s] greatest Parliamentary gifts was his skill in answering questions. He reveled in them, and his relish communicated itself to the House. I give an example. It was after the war, in 1952. Mr. Callaghan [likely James Callaghan, Labour MP for Cardiff, 1945-87, prime minister 1976-79], who was seldom conciliatory and who had a manner which the House thought was a little more assured than was warranted, was pressing the Prime Minister one day upon the subject of the Allied Naval Commander in the Mediterranean. The Prime Minister appeared to have inclined slightly in one direction when Leader of the Opposition and in another direction in office. Things were getting somewhat uncomfortable as the crakelike voice pressed the point….”

Mr. Callaghan: “Will the Rt. Hon. Gentleman agree to give the House an assurance that his view remains unchanged from 19th April last year when he told us that on high military and national grounds he would prefer an American commander in the Mediterranean?”

The Prime Minister: “My views are a harmonious process which keeps them in relation to the current movement of events.”

Lyttleton continued: “Callaghan shrugged his shoulders and sat down, as if to say it’s no use bowling googlies to W.G. Grace.”*

On that day in 1952, the grilling of Churchill continued, but with no marked result. With Callaghan defeated, Emmanuel Shinwell, Labour’s minister of Defence in the previous government, who took delight in prodding Churchill, entered the fray:

Mr. Shinwell: “Will the Rt. Hon. Gentleman mind addressing himself to the question a little more seriously? Does he not appreciate that this is a very serious matter affecting the naval command of the Mediterranean and determining the status of the British Navy? Does he not recall the occasion of 19th April last year when I, on behalf of the Labour Government…”

The Prime Minister: “…Gave way on the command of the Atlantic.”

Mr. Shinwell [undaunted]: “Does he not recall that I stated that our intention was to see that we remained in naval control of the Mediterranean and the Rt. Hon. Gentleman rejected that view and asserted that it was a proper location for the United States Command? Could he say what is the position of Her Majesty’s Government now?….Are we to understand that the Rt. Hon. Gentleman is going to sell the pass? Do I understand that not only has he changed his mind, but he is going to hand over naval control of the Mediterranean to the United States Government? Is this to be a complete monopoly for the United States?”

The Prime Minister: “I really do not think I have anything to add to what I have said. I am sure the House would not wish me to be provoked by the taunts of an uneasy conscience.”

Mr. Shinwell subsided. Mr. Paget, another frustrated Labour Member, appealed to the Speaker: “May I, Mr. Speaker, ask the Prime Minister when we can have a statement and whether there will be an early debate?”

Mr. Speaker: “The Hon. and Learned Gentleman can ask that, but whether he will get an answer I do not know. It seems to me that, as the Rt. Hon. Gentleman has said that he is not in a position to make a statement, further interrogation on this matter would seem to be fruitless.”

Churchill finally shut it all down: “I am not quite sure when a statement can be made, because the discussions have only just begun in London. I believe the American admiral proposes to go back to the United States before any final conclusion is reached. I cannot really say what the time-table will be, but naturally the matter is one on which the House would do well to keep itself informed.”

It was a bravura performance by Churchill, who liked nothing better than chewing up the Opposition—with all Parliamentary decorum, of course, during Question Time—a practice other legislatures might consider. And a little of Parliament’s strained courtesy would go a long way in the present United States Congress.

* W.G. Grace (1848-1915) was one of cricket’s greatest players. In cricket, a googly is a bowler’s delivery that breaks toward rather than away from the batsman. An experienced batsman can detect the change in spin and give it a good whack—as, in baseball, when a batter crushes “a pitch into his turbo zone.”

We recommend a fine little quote book, The Wit of Winston Churchill, by Geoffrey Willans and Charles Roetter (London: Max Parrish, 1955), which includes numerous Churchill ripostes during Question Time. Unlike most books of its nature, it also provides attribution for most quotations. The book is commonplace and copies can be found on bookfinder.com. Click here.

Featured Image: Cartoon by Michael Cummings from Willans and Roetter, The Wit of Winston Churchill, 1955.