Churchill and Polo: The Hot Pursuit of His Favorite Team Sport, Part 2 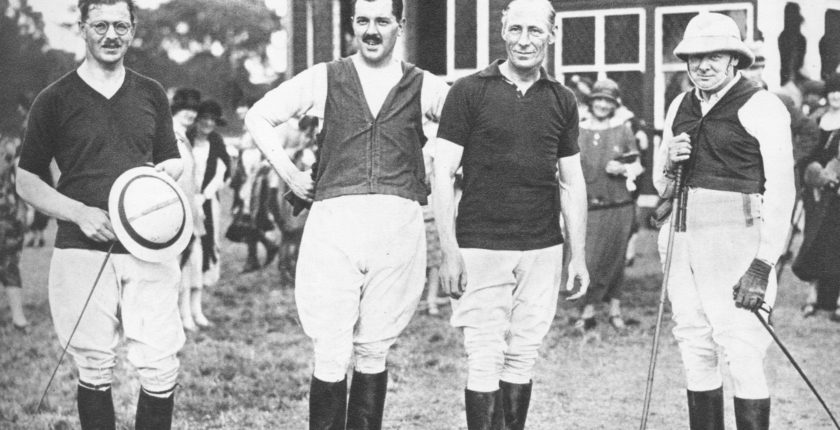 On 18 December 1898 Winston Churchill wrote to his friend Aylmer Haldane from a train near Wadi: “I am leaving the army in April. I have come back merely for the Polo Tournaments.”32 In support of this climacteric in his army polo career, Churchill recalled, the officers had subscribed to support a special train to carry their thirty polo ponies 1400 miles. “I shall stay at Government House,” Winston wrote his mother.

The week after that Jodhpore [Jodhpur] where we all stay practising for the Tournament with Sir Pertab Singh [administrator of Jodhpur]. Then Meerut for the Inter-Regimental Tournament, where I stay with Sir BB [Bindon Blood] and after that Umballa for the Championship—a very pleasant six weeks. Then home and the more serious pleasures of life…. I am playing polo quite well now. Never again shall I be able to do so. Everything will have to go to the war chest.33

Fortune interfered: “Everything smiled until last night—when I fell downstairs and sprained both my ankle and dislocated my right shoulder,” he wrote his brother Jack in February:

I am going to struggle on to the polo ground this afternoon—but I fear I shall not be able to play in the Tournament as my arm is weak and stiff and may come out again at any moment. It is one of the most unfortunate things that has ever had happened to me and is a bitter disappointment. I had been playing well and my loss is a considerable blow to our chances of winning. I try to be philosophic but it is very hard. Of course it is better to have bad luck in the minor pleasure of life than in one’s bigger undertakings.34

In his autobiography three decades later, Churchill wrote that he first dislocated his shoulder on arriving in India for the first time in 1896. At the Bombay quayside he had grabbed an iron hand-hold ring when the boat fell with a sudden surge and he wrenched his shoulder. Thereafter, he wrote, he had to play polo with his arm strapped to his side.

His letters at the time make no mention of this incident. In one message, sent just a few days after arriving, he writes: “nearly 500 tons of luggage had to be moved we were busy from 4 in the morning till late at night.”35 It was his habit to mention injuries—an injured knee in December 1896, for example. After being hit with splinters from a rifle target in April 1897 he wrote: “I managed to play polo with the reins fastened on to my wrist.”36

In the first version of this article (1991), I suggested that Churchill’s first dislocation likely occurred after falling at Singh’s home in Jodhpur in 1898, rather than the much more romantic quayside ring episode in 1896. Upon reflection and expert advice, however, I believe Churchill’s version is correct. After describing the Bombay accident he writes: “Since then, at irregular intervals my shoulder has dislocated on the most unexpected pretexts; sleeping with my arm under the pillow, taking a book from the library shelves, slipping on a staircase, swimming, etc.” (Emphasis mine.) This makes it clear that Bombay was the initial incident, although his staircase fall two years later certainly aggravated his condition.37

Even with his arm immobilized, Churchill managed to play well enough that his team beat the 5th Dragoon Guards 16-2, and the 9th Lancers 2-1, in the first round on 23 February. In their final match with the 4th Dragoon Guards the next day, the Hussars won 4-3, making them Inter-Regimental Champions.

“Few of that merry throng were destined to see old age,” Churchill ruminated sadly. “Our own team was never to play again. A year later Albert Savory was killed in the Transvaal, Barnes was grievously wounded in Natal, and I became a sedentary politician increasingly crippled by my wretched shoulder.”38

Despite his departure from the home of polo, Churchill continued to play the game. An appointment book for 1901, his first year in Parliament, showed seven polo dates in May, three in June. Listed for Saturday July 6th was “House of Commons versus Guards” and games on Monday-Wednesday August 5th-7th were marked “Windsor.” Winston informed his mother that he had

“decided definitely to play polo this year in a team which is being formed by some of my young military friends, and I think if I get two days a week at Hurlingham or Ranelagh, it will provide me with the physical exercise and mental countercurrent which these late hours and continual sitting of the house absolutely require.”39

In 1902 Churchill wrote a long letter to Secretary of State for War St. John Brodrick, arguing against a proposed prohibition of inter-regimental polo tournaments. He attributed the increasing cost of ponies to the English gentry’s participation in the game, but nevertheless argued that polo contributed to building a soldier’s character and skill. Two years later (after opposing Brodrick over the latter’s army estimates), Churchill left the Tories for the Liberal Party. As a consequence, he felt obliged to alter his club membership. It is often said that Churchill was unaware of the political animus he engendered. But in May 1905 he remarked to Liberal MP Alexander Murray (later Baron Murray of Elibank):

I foolishly allowed myself to be proposed for Hurlingham as a polo playing member; & was of course at once black-balled. This is almost without precedent in the history of the Club—as polo players are always welcomed. I do not think you and your Liberal friends realize the intense political bitterness which is felt against me on the other side.40

The next several years were busy political times for the young statesman, but polo was not forgotten and occasionally mentioned. “I am going to spend Sunday with Ivor [Guest] at Ashby—with polo on Saty & Monday.”41 … “I stay (at Blenheim) for the next ten days, writing in the mornings & playing polo at Rugby in the afternoons.”42 … “We are having a pleasant week on this … comfortable yacht [HMY Victoria & Albert], though the rainy weather has … spoiled … polo”43 … “I hope … that I shall see YM [Your Majesty, Alfonso XIII, King of Spain] in the seclusion of the polo world.”44

Pushing fifty, polo was still very much Churchill’s sport. In the summer of 1921, for example, when he and his wife were looking for a family summer cottage, Clementine rented one of the houses at Rugby School, near Ashby St Ledger. “The plan was that Winston would stay with them all,” her biographer wrote, “and be diverted by polo with his Guest cousins.”45 This the same year Clementine cautioned Winston against speculating in stocks, telling him: “Politics are absolutely engrossing to you…and now you have painting for leisure and polo for excitement and danger.”46

At Chartwell, which he bought in 1922, Churchill kept polo ponies. Their expensive country house in Kent was often the subject of financial “discussions” between Winston and Clementine. Afterwards, Winston would embark on a well-meant but only briefly kept economy program. During one of these, in 1926, he suggested that Chartwell be rented while they were in London, and that all livestock—except the two polo ponies—be sold.47 The ponies were still sacred!

Many photographs exist of the mature Churchill at play, always with his right arm strapped to his side.48 He wipes his brow after a chukka at Roehampton (12 March 1921), takes a drink during a break in a Lords versus Commons match (June 1922). A famous photo shows him playing with the Prince of Wales in 1924. A group picture taken on 18 June 1925 shows WSC with fellow players Capt. G.R.G. Shaw, Captain Euan Wallace and Captain the Hon. Freddie Guest, after Churchill’s Commons team defeated the House of Lords. Winston and Clementine are seen arriving at Hurlingham the same year, to watch the British Army play polo against an American team.

Winston’s last game had the longest gestation of all. Plans for it began in the autumn of 1926, when Admiral Sir Roger Keyes invited Churchill, who was taking a holiday cruise in the Mediterranean, to inspect the fleet. They were old friends, having met during polo around 1904, according to Keyes’s biographer. In those days young Keyes and his friends “would drive down to Wembley and play polo on hired ponies from 8 to 9 am. Often, before they finished, a party of young Members of Parliament would arrive to play from 9 to 10 am and it was at Wembley that [Keyes] first made the acquaintance of Winston Churchill.”49

As to Polo, of course I should love to have a game. It is awfully kind of you to offer to mount me. It would have to be a mild one as I have not played all this season. However I will arrange to have a gallop or two beforehand so as to ‘calibrate’ my tailor muscles [sartorius]. Anyhow I will bring a couple of sticks and do my best. If I expire on the ground it will at any rate be a worthy end!50

Taken at a gallop, he must have reasoned, and would later write in My Early Life, it would be a very good death to die….

The enthusiastic Sir Roger replied immediately: “Don’t bother to bring polo sticks—you will find all kinds and lengths here. What is your Hurlingham handicap?—We’ll get up a four chucker [sic] match for one day after you’ve had a bit of practice. I expect 4 would be about enough if you haven’t been playing—also where do you like playing?”51

Churchill wrote back, “If you want me to play a game of Polo that afternoon, I shall be quite ready to do so without a preliminary ‘knock up.’ I thought it might be inconvenient to play on Monday as you state the Fleet would probably be sailing that day. You must realise I am very bad at Polo. I think my latest handicap was 2.”52

On 24 December 1926 Churchill advised Keyes in Malta, “I shall be with you in plenty of time to play on Saturday afternoon [8 January]. I do not think one day’s practice would do me much good; in fact it would only make one stiff. I hope to do a little hacking in the next few days, if the snow which now overlays us should permit.”

Evidently, Churchill managed his final game without mishap. From Admiralty House, Malta, 10 January 1927 he wrote Clementine: “I got through the polo without shame or distinction & enjoyed it so much.”53

At age 52, that was the last recorded occasion when Winston Churchill played polo.

Barbara F. Langworth is a New Hampshire publisher and editor. “Churchill and Polo” was first published in 1991. This updated, amended version is published by kind permission of the author in response to reader requests for more information on Churchill’s favorite team sport. The article incidentally demonstrates the rich store of material available in The Churchill Documents, published by Hillsdale College Press.

37 Winston S. Churchill, My Early Life (London: Thornton Butterworth, 1930), 116. My thanks to the late Lady Soames, and to Paul Courtenay and Andrew Roberts, for researching both shoulder dislocations and helping me arrive at the correct sequence of events.