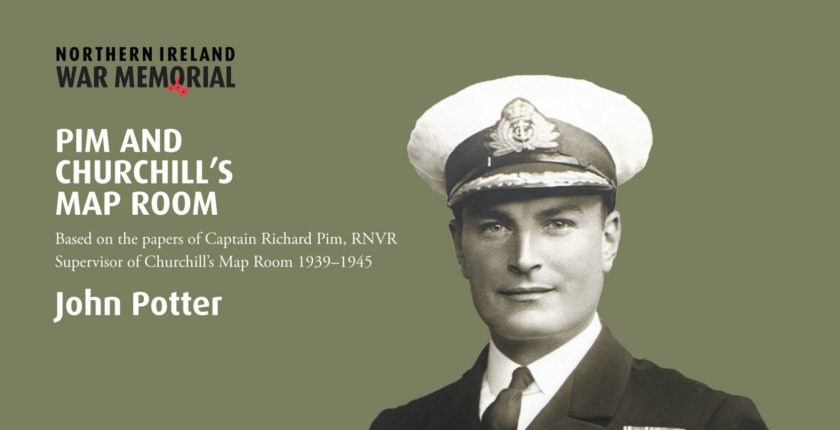 Richard Pim was born in County Antrim in 1900, the son of a well-known Quaker who managed a linen firm. Richard’s brother Thomas, an observer in the Royal Flying Corps during World War I, served in Gallipoli, Egypt and France but was killed before the Armistice. That same year, 1918, Richard joined the Royal Naval Volunteer Reserve as a midshipman. After the war he read law at Trinity College, Dublin, and later joined the Royal Irish Constabulary, where he fought against the IRA insurgency in southern Ireland.

Following the partition of Ireland in 1922, Pim was posted to Northern Ireland’s Home Office, where he worked for the prime minister, Lord Craigavon. By 1938 he was overseeing air raid precautions and the province’s War Book, collating the action to be taken in the event of war with Germany. When war came in September 1939, he was given the rank of Commander and transferred to the Operations Division of the Admiralty in London where he was put in charge of Winston Churchill’s map room, a post he held throughout the war. He described this task as “the most fascinating and rewarding [I] could possibly have had.”

This fine little book distills Pim’s memoirs, which are lodged in the Public Records Office of Northern Ireland in Belfast. Expertly edited by John Potter, it offers charming vignettes of what it was like to work for Churchill, as Pim saw him on an almost daily basis and travelled with him to almost all the wartime conferences.

When Admiral Sir Dudley Pound sent Pim to work for Churchill, he said, “It won’t be easy.” Sure enough, the new First Lord of the Admiralty only gave Pim forty-eight hours in which to get the Map Room fully operational, something that he nonetheless managed to do. In May 1940 Pim was promoted to captain and followed Churchill first to Downing Street and then, during the Blitz, to the No. 10 Annexe: the ground floor of the building above what are now the Cabinet War Rooms in Whitehall.

In May 1940, Churchill appointed his first government ministers in his flat at the Admiralty, Captain Pim and Brendan Bracken marshalling the candidates in various rooms. At one point, recalled Pim, Anthony Eden was in the drawing room, Archibald Sinclair in the bedroom, Lord Beaverbrook in the dining room and Churchill’s successor as First Lord, A.V. Alexander, in the cloakroom.

A major problem during the Fall of France was maintaining contact with key persons on the spot. Pim recalled Churchill trying to reach French Premier Paul Reynaud, General John Dill and the British ambassador to Paris: “The speed of the German advance was disorganizing the French telephone system,” he wrote. What with “the prevalence of Fifth Column and my bad French when talking on the telephone, getting any connection at all was very difficult.”

Churchill convened the Defence Committee in the Admiralty in late May 1940, with Chief of the Imperial General Staff Edmund Ironside and his soon-to-be-successor Sir John Dill, who had returned from France after the German victory at Sedan. It was now clear that the British Expeditionary Force (BEF) might be cut off on the continent. “The PM got to his feet and, with his hand stuffed in the back of his trousers, paced to and fro,” Pim wrote. “We cannot leave our Army to be slaughtered or to surrender, NO, never that!,” Churchill exclaimed. “We must get them out and provide them with the necessary weapons to deal with the enemy.” Churchill understood that much equipment might be lost, “but if we lose the men then we lose the war. Our men must battle through to Dunkirk. When they get there, the Navy will get them out.”

Pim wanted to help get men off the Dunkirk beaches. Late in the evening of 28 May, having been on continuous duty for thirty-six hours, he asked Churchill for four days’ leave to take part in that vital operation. “God bless you,” Churchill replied. “I wish I was going myself.”

Pim commanded a flotilla of twenty small boats, transferring about 3500 men from the beaches onto destroyers, under almost continual artillery and aerial bombardment. When he returned on 2 June, the Prime Minister said with a twinkle in his eye: “So you’re back again to do some work.” Churchill appreciated Pim’s personal courage, the characteristic he admired above all others.

Pim’s maps covered every theater of war, and were kept constantly up to date with the positions of every Allied and Axis ship, air squadron and military formation in the world in the light of the latest Intelligence reports. Pim and the map room accompanied Churchill on his travels, including numerous voyages and flights. His staff took losses; on the way to Yalta one of the map room staff, Colonel Newey, was killed when his aircraft was forced to ditch off the coast of Tunisia.

The devoted Pim sometimes worked into the early morning hours to update the maps for Churchill, who was not above his little joke. A wartime secretary, Elizabeth Nel, recalled Pim on his knees, working over a huge map laid on the floor, his naval cap upside down next to him. Churchill entered, took a long look, fished a coin from his pocket, and tossed it in Pim’s cap. But everyone knew how much Churchill relied on him. The map room saw a virtual Who’s Who of notables, visiting at Churchill’s proud invitation. Indeed it’s almost shocking how many random people were allowed inside this most sensitive of areas. They included King George VI, Sir William Beveridge, Wendell Willkie, Charles de Gaulle, Robert Menzies, Orde Wingate, Guy Gibson, Ernest King, Churchill’s cousins Shane Leslie and Clare Sheridan, King Haakon of Norway, Averell Harriman, Russian General Golikov and Admiral Kharlmov.

Pim occasionally served as Churchill’s tour guide. After dinner one evening in Cairo in November 1943, Churchill showed the map room to Chiang Kai-Shek and his wife, in company with Anthony Eden, Lord Mountbatten and General Carton de Wiart. The PM gave the Chinese couple “a colourful and candid account of the events of the war, past and present including plans for the future,” Pim recorded. He went on for ninety minutes, pausing only when his cigar went out—whereupon Pim stepped in to take up the theme until it was re-lit. Pim recalled hoping that “the cigar when lit would last a long time.”

On Saturday, 3 June 1944, Pim joined Churchill and Jan Christian Smuts to see the armada preparing for the invasion of France. Boarding a motor launch at Southampton Water, they crossed the Solent to Cowes, then Ryde and came ashore at a jetty in Portsmouth. “We had sailed past ship after ship…warships, passenger liners (including three of the familiar Belfast cross-channel ferries) coasters and landing craft. It was the most impressive sight of British naval might that I shall ever see.”

At 10am on 26 July 1945, it fell to Captain Pim to bring Churchill the first disastrous results of the General Election: “I think the first ten [seats] were Labour. The Prime Minister was in his bath and certainly appeared surprised if not shocked. He asked me to get him a towel and in a few minutes, clad in his blue siren suit and with a cigar, he sat in his chair in the map room where he remained all day.” Pim and his staff of eight marked up the results from each constituency from the tickertape machine he had installed. By 5pm it was clear that Labour had won convincingly.

Churchill asked Pim to arrange a car for 7pm to take him to Buckingham Palace to resign. Yet the outgoing prime minister still had the thoughtfulness to send refreshments and cigars to the map room staff that evening, telling Pim that he had seen many elections but none so well displayed. He returned twice to the map room that evening to reminisce with the staff about their wartime voyages together. As he went to bed he told them: “God bless you always.”

Pim received a knighthood in the resignation honours list on 14 August. It was, he wrote, “the final act of one who had shown me on so very many occasions nothing but kindness and friendship during six most strenuous years.” But it was not the final act. Churchill also sent him all six volumes of The Second World War and four volumes of his speeches, all personally inscribed. He also found him a good job as the Inspector of the Royal Ulster Constabulary.

Captain Pim knew Churchill as well as almost anyone else during the Second World War, and admired him unreservedly. This charming, well-written short book deserves a place on the bookshelves of everyone interested in “the Greatest Briton.”