Adrian Phillips Unmasks an Appeasement Architect in the 1930s 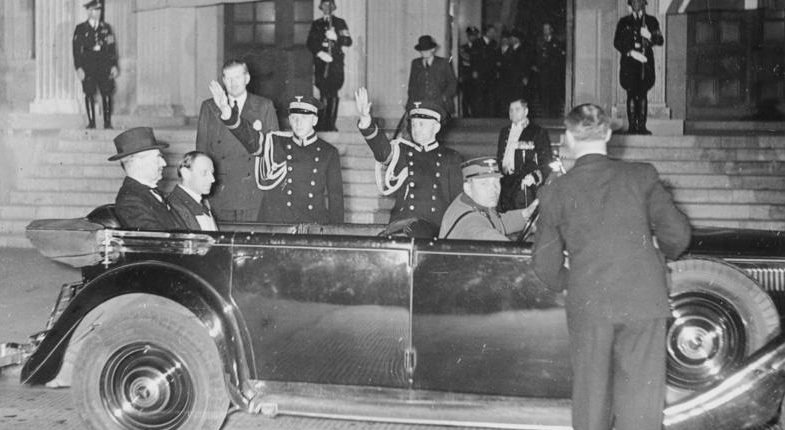 Munich, 23 September 1938: Chamberlain and Wilson (to his left) leave the Führerbau for his hotel during a break in negotiations. (German Federal Archives, Wikimedia Commons)

Churchill’s verdict on Chamberlain’s Appeasement policies was summarized by his description of the Munich Agreement: “a total and unmitigated defeat.” Indeed, even as Chamberlain landed at Heston aerodrome and proclaimed “peace for our time,” Appeasement’s failure was evident. Adrian Phillips follows a long tradition of polemics dating back to Guilty Men in 1940. His book details exactly how Britain embraced a foolhardy policy in the years leading up to the Second World War.

Despite the title, Phillips relegates Churchill and his relationship with Chamberlain to a decidedly secondary position. He primarily focuses on the role of Sir Horace Wilson, Chamberlain’s chief adviser and confidant, in advancing Appeasement against opposition from the Foreign Office. Understanding Wilson’s contribution is critical, Phillips argues:

Wilson was so close to Chamberlain that it is impossible to understand Chamberlain’s premiership fully without looking at what Wilson did. The two men functioned as a partnership, practically as a unit…. [Wilson] was also the key figure in the back-channel diplomacy pursued with Germany that showed the true face of appeasement…. Chamberlain and Wilson had aimed to prevent war entirely; instead they made it almost inevitable (xiv-xv).

In a series of chronologically ordered vignettes, Phillips tells “the story of that failure” by recounting Chamberlain and Wilson’s attempts to fend off domestic opposition and pursue back-channel negotiations with Hitler and Mussolini (xv). 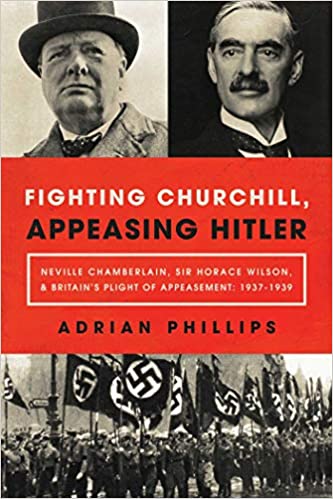 Phillips contributes to scholarly literature on Appeasement by highlighting Wilson’s central role in shaping Chamberlain’s foreign policy. This aspect has been largely ignored by contemporary historians. When Wilson does appear in Appeasement accounts, scholars have generally downplayed his influence. In 1963, Sir Martin Gilbert and Richard Gott concluded: “…the legend of the éminence grise dies hard… whether Wilson shared Chamberlain’s ideas or shaped them is difficult to ascertain.”1

Similarly, G.C. Peden dismisses claims of undue influence: “…when there was outright disagreement between [Wilson] and the Foreign Office…it was the Foreign Office that prevailed.”2 Most recently, Tim Bouverie’s Appeasement: Chamberlain, Hitler, Churchill, and the Road to War took that line: It would be wrong “to suppose that [Wilson] did more than enforce and reinforce the Prime Minister’s own policy decisions.”3

Phillips tales the contrary position that Wilson’s influence was crucial. He marshals a vast array of primary sources drawn from meticulous research for an MPhil. thesis at Birmingham University. He relies heavily on the Prime Minister’s office records and Cabinet Office files in the UK National Archives. Phillips also frequently refers to collections of private documents, including The Churchill Documents, vol. 13. He cites published diaries and memoirs of leading figures in Britain’s prewar government. A lengthy list of secondary sources supplements this primary source-based approach.

Far from a civil servant

Together these extensive documents demonstrate both Wilson’s enthusiastic support for appeasement and his close, personal relationship with Chamberlain. “As gatekeeper and sifter of correspondence alone,” Phillips argues, “[Wilson] controlled a large slice of the Prime Minister’s working life” (47). From his office in 10 Downing Street, Wilson enjoyed greater access to Chamberlain than any other contemporary political figure. He became a sounding-board for the Prime Minister’s policy proposals.

Phillips exposes as a lie Wilson’s later claim that he reported his every conversation to the Foreign Office (388). According to Phillips, Wilson was far from a mere civil servant. He was the power behind Chamberlain’s throne and a true believer in Appeasement. Its aim, in Wilson’s own words, was “to avoid war altogether, for all time” (388).

Fighting Churchill, Appeasing Hitler manages to combine an academically rigorous foundation with a lively narrative. It presents authentic heroes and villains while immersing the reader in the inner circle of the Chamberlain government. Although an enormous cast of minor characters flit in and out, Phillips never loses sight of Chamberlain’s and Wilson’s centrality. His introductory “Dramatis Personae” provides a handy biographical “Who’s Who” in the complicated world of 1930s international relations.

The book’s style, however, frequently verges on the journalistic, as Phillips liberally applies connotatively charged adjectives to nearly every figure. He calls Hitler’s foreign minister, Joachim von Ribbentrop, “stupid, rude, [and] gauche.” The pro-Nazi socialite Unity Mitford is “Hitler’s crazed British aristocratic groupie” (82, 315). Phillips also often spices his historical narrative with editorializing remarks: “Whenever Chamberlain saw dregs in a glass it was half full of the finest vintage to him” (263). This casual tone, along with catchy but vague chapter titles (Chapter 26, “Catching the Mugwumps”) diminish the book’s utility as an academic source.

When Phillips does address Churchill’s critical role, he seems quick to dismiss WSC’s political acumen. For example, Phillips describes Churchill’s character as “notably abrasive” and lacking “judgment…the archetypal young man in a hurry” (7). This caricature seems overdrawn. Churchill certainly never pulled punches when it came to condemning Appeasement. His ability to maintain personal friendship with political enemies has been well-documented. Certainly he despised Wilson for his appeaser’s role. Yet he retained him as head of the civil service under his National Government against Clement Attlee’s opposition (374).

Phillips correctly admits that Churchill extended “general forgiveness” to the Appeasers (379). But his suggestion that as a policy-maker, Churchill was “right on the big picture but wrong enough on the details to muddy the waters” seems suspect in light of something Phillips himself later acknowledges: It was Churchill not Chamberlain who sought out “extensive and detailed” military intelligence as war approached (116, 200).

Minor faults aside, Fighting Churchill, Appeasing Hitler offers a compellingly researched condemnation of Chamberlain’s and Wilson’s naiveté. After discovering the full extent of their blunders, readers will appreciate Phillips’s description of Wilson’s departure. On Churchill’s first day as prime minister, he ordered him to vacate his 10 Downing Street office. If his room was not cleared by 2pm, Churchill said, he would make Wilson “Minister to Iceland” (373).

According to another version of that story (which Phillips does not include), Wilson returned to his office after lunch, finding his papers stacked in the hall. Inside were Randolph Churchill and Brendan Bracken, comfortably smoking cigars on his couch.4 No words were exchanged and Wilson left, never to return.

Though Horace Wilson has quietly faded into obscurity, Phillips’s much-needed volume brings to light the magnitude of his influence over British policy and the predictable failures of Wilson and Chamberlain’s policy of appeasement. Phillips’ account is worth reading for the precise details which made a middle-rank civil servant an architect of foreign policy.

Connor Daniels is a junior studying history and politics at Hillsdale College and a Winston Churchill Fellow.