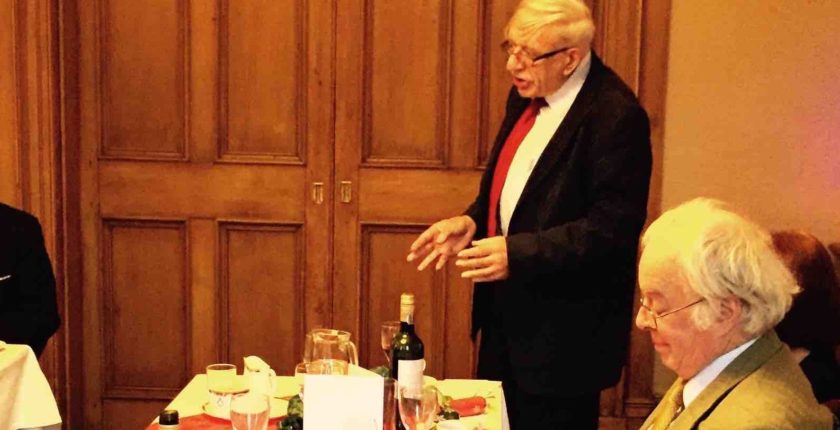 Students and readers often ask us for the Churchill authors to read. Along with the standard litany of Martin Gilbert, Andrew Roberts, Larry Arnn, Geoffrey Best and Mary Soames, the name of Paul Addison is always prominent. Dr. Addison was a scrupulous historian of Churchill and his times. He realized, above all, that what matters most is the truth. Tell the truth about your subject, he would say. If the subject is worthy, it needs no enhancement. “I have always thought,” he said, “that paradoxically, it diminishes Churchill to regard him as superhuman.”

Professor Addison read for an undergraduate degree at Pembroke College, Oxford before moving to Nuffield College, Oxford for postgraduate study. In 1967 he became a Lecturer at Edinburgh University and subsequently a Reader for twenty-three years. He was named an Endowment Fellow in 1990. From 1996 to 2005, he Directed the Centre for Second World War Studies. He also wrote for the Times Literary Supplement, the New Statesman and the London Review of Books. Primarily, his wife Rosemary remembers, he aimed “to make history accessible, understandable and comprehensible to his fellow human beings.”

Addison wrote and edited ten Churchill works, listed below. His classic, still a standard work, was Churchill on the Home Front (1992). Atypically for most Churchill writers, he took the then-novel approach of studying domestic politics. Until Home Front, the prevailing impression was that Churchill was bored with domestic issues, insignificant in his career. Methodically Dr. Addison showed how completely wrong that was, weighing the evidence with grace and understanding.

Why Churchill was unique

Addison understood greatness, warts and all. “Which warts,” William Buckley said, “do not deface Churchill because of the nobility of his cause, and his high sense of the British moment.” True, nothing surpasses 1940—but Churchill accomplished much else. Addison limned it all. Churchill’s faults, like his virtues, were on a grand scale, he would say. But the latter heavily outweighed the former. Always present was Churchill’s high sense of the British moment.

Take for example Churchill’s youthful fling with Eugenics, and of sterilizing the mentally incompetent. There was an uproar about this recently when it was “discovered.” (Read: someone finally found it in the public records.) Randolph Churchill was blamed for purposefully leaving it out of his second biographic volume. Martin Gilbert had to write explaining that Randolph had never seen the documents.

Churchill abandoned Eugenics quickly, along with most intelligent people. But some readers were outraged. “I can never think good things of him again,” one said. “No truly educated intelligent person could adopt such views.” Paul Addison showed us a more balanced way to look at the issue: “Churchill’s intentions were benign,” he wrote, “but he was blundering into sensitive areas of civil liberty.” Then he drew a deeper lesson no one else had contemplated: “It is rare to discover reflections of a politician on the nature of man. Churchill’s belief in the innate virtue of the great majority of human beings was part and parcel of an optimism he often expressed before the First World War.”

This was perceptive, broadminded and fair. It helped to explain why Churchill was unique. Few politicians reflect on “the nature of man.” Fewer still  believe “in the innate virtue of human beings.” Such comprehension is a rare thing among historians; and many others besides.

Another Addison triumph was, conversely, one of his shortest: his Churchill entry for the Oxford Dictionary of National Biography. Writing for the DNB is not easy. One must be deft, economical, balanced and accurate. Paul’s Churchill piece is a model of incisive wisdom. It appears in book form in the Oxford VIP series. Everyone should read it: all that matters about Winston Churchill in only 138 pages. On the same level is Churchill: The Unexpected Hero which is the same clear exposition, expanded to 320 pages. Many reviewers call this the best “brief life” of Churchill yet published.

In August 2018, Paul Addison was diagnosed with lung cancer. He fought it for eighteen months. Last June, we had planned a lunch with Paul and Rosemary and the historian Gordon Barclay, when the Hillsdale College Cruise stopped in Edinburgh. Alas, gales in the Firth of Forth prevented our anchoring. By then, Paul had told me of his situation. Around the New Year I asked his friend David Stafford for news. It was not good. On January 21st he left us.

Our grief and loss are deeply felt. Paul was a gentleman scholar: a man of strong convictions, who never let them interfere with his search for truth. Hagiography is fatal. Honesty matters. Those were his cardinal precepts.

Above all, he left a corpus of excellence from which young people will always learn things worth knowing. His work abides, and as Churchill said, a man never dies as long as he is remembered. All who love history will forever remember Paul Addison.

The Road to 1945: British Politics and the Second World War 1 (1977, rev. 1994). A rigorously researched study of the crucial moment when political parties put aside their differences to unite under Churchill and focus on the task of war. But the war years witnessed a radical shift in political power, dramatically expressed in Labour’s decisive victory in 1945.

Now the War Is Over: A Social History of Britain, 1945–1951 (1985, rev. 1994). Vast changes in British society followed the most destructive war ever known. Britain reshaped itself with high ideals and a collective desire to enjoy the fruits and opportunities of peacetime.

Churchill on the Home Front 1900-1955 (1992). “A tour de force on Churchill as a domestic figure rather than as the bulldog wartime leader, and a subtle portrait of him as a politician. Addison revises the view of Churchill as uninterested and out of his depth in domestic affairs, painting a nuanced picture of a canny parliamentarian.” —Kirkus

Churchill: The Unexpected Hero, Lives and Legacies Series (2005). In the Second World War, Churchill won twice: over Nazi Germany, and over a legion of sceptics who derided his judgement and denied his claims to greatness. One of the best “brief lives” ever published on Winston Churchill.

Winston Churchill, Oxford VIP Series (2007). Text from Dr. Addison’s Churchill entry for the new Dictionary of National Biography. Hailed as a miniature masterpiece, an even briefer life than Unexpected Hero. It is dramatic and penetrating despite fewer than 150 pages. The ideal book to read if you read nothing else about Churchill.

No Turning Back: The Peacetime Revolutions of Post-War Britain (2010). A study of the vastly changing character of British society since the end of the Second World War. A series of peaceful revolutions transformed the country. The peace and prosperity of the second half of the 20th century appear as more powerful solvents of settled ways of life than the Battle of the Somme or the Blitz.

The Connell Guide to Winston Churchill (2016). A short, incisive guide based on the author’s Dictionary of National Biography entry. Text is arranged in Q&A format and designed to answer young people’s questions about Churchill. It analyzes his extraordinary career and looks at the radically different ways in which historians have seen him.

Time to Kill: A Soldier’s Experience of War in the West (1997). Foreword by Len Deighton. Papers by numerous scholars. Based on a University of Edinburgh symposium on the Second World War seen through soldiers’ eyes, from Africans under European to command, to Soviet women fighting alongside the men, to ordinary “squaddies” on the front lines in all theaters of war.

The Burning Blue: A New History of the Battle of Britain (2000): Paul and Jeremy Craig compile the work of seventeen accomplished historians on every aspect of a history-changing battle. No survey could be more wide-ranging or fascinating. First published in 2000 to mark the 60th anniversary of the Battle, since reissued.

Firestorm: The Bombing of Dresden, 1945 (2006). Paul, Jeremy Craig and a panel of experts reassess the evidence and the issues, including whether the Dresden bombing constitutes a war crime. The book considers why Dresden has come to raise military and ethical questions on the waging of total war.

For the Churchill Project

“The End is Nigh: British Politics, Power, and the Road to the Second World War, by Robert Crowcroft,” August, 2019.

Articles and Chapters on Winston Churchill

Compiled for the Churchill Project by Professor Antoine Capet, University of Rouen. Some titles not available on Amazon USA may be found on Amazon UK.

Articles and Chapters on Other Themes and People

“Britain and the Politics of Social Patriotism,” in Sidney Aster, ed., The Second World War as a National Experience. Ottawa Conference, 14-19 November 1979. Toronto: Canadian Committee for the History of the Second World War, 1981: 38-49.

“Oxford and the Second World War,” in Brian Harrison, ed., The History of the University of Oxford, Vol. 8: The Twentieth Century. Oxford University Press, 1994: 167-88.

Richard M. Langworth is Senior Fellow for the Churchill Project at Hillsdale College. His personal memories of Paul Addison will be found on his blogsite.