No Panic over UFO Sightings 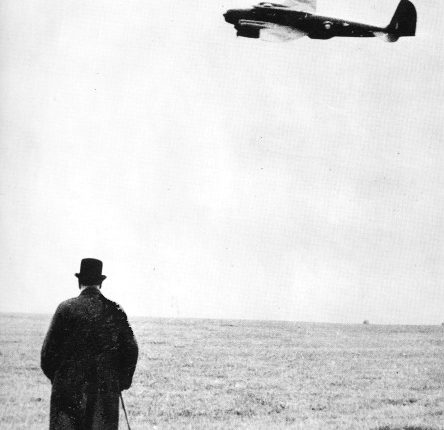 Featured Image: Scanning the skies: Churchill watches the first American-built airplane, more welcome than a UFO, arriving in Britain as part of the American Lend-Lease program, which became law on 11 March 1941.

No sooner did we learn that a Churchill article pondering the possibility of alien life was not new but dated to 1942, when one of the same sources published a letter stating that Churchill as prime minister inquired into reports of Unidentified Flying Objects, and had UFO reports classified to prevent public panic. This story has recently evolved to the Internet. So far as we and the Churchill Archives Centre can find, there are no grounds to believe it, though we did track the origins.

In 2010, The Independent reported that according to unclassified documents from the Ministry of Defence, the grandson of a man who served in the Royal Air Force during World War II said in 1999 that his grandfather was present when Churchill and then-General Eisenhower discussed the UFO incident. An RAF reconnaissance plane, returning home and flying over the English Channel, encountered a metallic object that

appeared to hover noiselessly relative to the aircraft….[Then it] very suddenly disappeared, leaving no trace of its earlier presence. This event was discussed by Mr. Churchill and General Eisenhower, neither of whom knew what had been observed. There was a general inability for either side to match a plausible account to these observations…another person raised the possibility of an unidentified flying object, at which point Mr. Churchill declared the incident should be immediately classified for at least fifty years and its status reviewed by a future prime minister.

Beginning in 1950, reports of unidentified flying objects (UFOs) were rife in Britain. Even Lord Louis Mountbatten stated his belief that the earth was being visited by aliens. According to The Observer, reporting in 2002, Churchill had demanded to know the truth about UFOs from his scientific advisers: “What does all this stuff about flying saucers amount to? What can it mean? What is the truth? Let me have a report at your convenience.”

The advisers are said to have produced a six-page report, “The Working Party on Flying Saucers,” an idea of Sir Henry Tizard, one of Churchill’s scientific advisers during World War II. The Observer quoted UFO historians Andy Roberts and David Clarke, whose book, Out of the Shadows, supposedly cited the report, which had hitherto been denied by the Ministry of Defence: “The report played down the phenomenon and insisted there was no threat to Britain. But a few months later an order went out expressly banning all RAF personnel from discussing sightings with anyone not from the military.”

We relayed this material to our student researchers on the Official Biography, specifically asking them to look in the raw material for future volumes of The Churchill Documents, specially around 1952. They could find no information to verify that Churchill said any of those things, nor any original documents or meeting minutes confirming the UFO report on “Flying Saucers.”

Although widely reported as “fact” by the media at the time, its credibility is based entirely upon an anecdote reported in a letter from a member of the public, received and filed by MoD in 1999. The letter writer claimed he was the grandson of a RAF officer who was “part of the personal bodyguard” of the PM during WW2 (no evidence for this has emerged) and who was present when the incident was discussed with U.S. General Eisenhower (again, no evidence). Afterwards Churchill was supposed to have said: “This event should be immediately classified since it would create mass panic amongst the general population and destroy one’s belief in the church.” This story, seen in the overall context of the MoD UFO files, was just one of hundreds, nay thousands, of similar rumours and anecdotes that found their way to the “UFO desk” at Whitehall. Checks by records staff in 1999 found no evidence to support it.