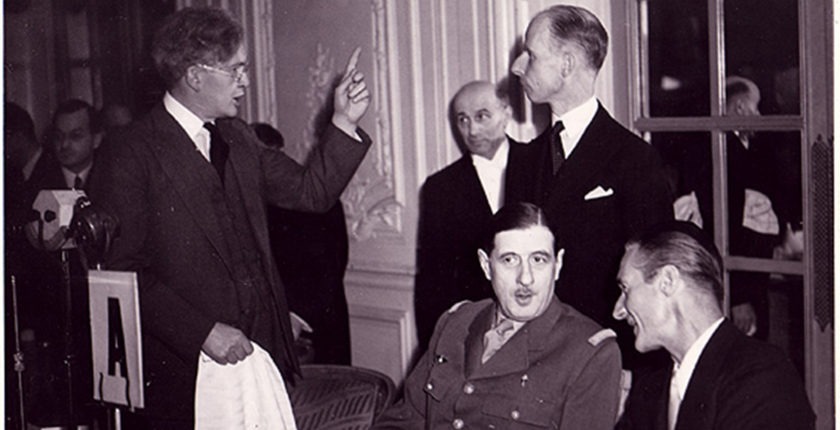 Churchill’s impulse to be “on the scene” where battles took place was not uniformly applauded. During World War II, his frequent excursions to various fronts worried his supporters, and caused critics to complain that he was taking unnecessary risk. Criticism mounted when Churchill hied to France only six days after D-Day.  He revisited the front several times through March 1945.

Captain Alec Stratford Cunningham-Reid DFC (1895-1977) was a distinguished flying ace in World War I. Afterward he entered politics as a Conservative, serving as a Member of Parliament periodically between 1922 and 1945. Peppery and contentious, he engaged in numerous arguments, which in 1943 resulted in fisticuffs with another MP. Both apologized the next day, but the incident was widely reported. In America the Los Angeles Times ran the story under the headline, “England Grins as Members of Commons Trade Punches.”

When Churchill went to France in 1944, Cunningham-Reid was outraged: “The Prime Minister should not risk his life unnecessarily…. Was there ever such a good target as the one presented by our not inconspicuous Prime Minister perched up high on a Jeep? Nobody could have mistaken or missed that massive figure, complete with cigar to identify him…. Subsequently, during the visit in question, the Prime Minister, General Montgomery, Field-Marshal Smuts, General Sir Alan Brooke, and, in all probability, the Supreme Commander [Eisenhower] and other key men—I notice that the Supreme Commander went over that same day—got into a huddle…. The Minister of Information will, no doubt, correct me if that is not so.”

The Minister of Information was Brendan Bracken, who did indeed respond. In a brilliant few minutes, Bracken delivered a superb defense of Churchill’s wartime visits to the fronts. Because it has not been published, even in The Churchill Documents, we thought it worth bringing to the attention of readers.

Source: Hansard (Parliamentary Debates), House of Commons, 15 June 1944, vol. 400, cc2293-2300. Terminological note: all MPs were referred to as Honourable (hon.); those who had served in the military were further entitled to the term “gallant.” The term Right Honourable (rt. hon.) indicates a member of the Privy Council, usually past and present ministers.

The synthetic solicitude for the Prime Minister shown by the hon. and gallant Gentleman has never been supported by votes in the Lobby, or by any action outside or inside this House. He has chosen this occasion to make some remarks about General Eisenhower’s relationships with the Prime Minister, and he has come forward, in a rather greasy way to show us the best method of establishing proper relationships with the United States. I tell the hon. and gallant Gentleman that he has no qualifications for soothing relationships between England and the United States. I must remind the hon. and gallant Gentleman that the Prime Minister is also Minister of Defence, and that in the latter office it is his duty to see things for himself.

It would be difficult to overestimate the benefits that Britain has gained from the Prime Minister’s journeys, to which the hon. and gallant Gentleman objects. The House will remember that, as a consequence of one of his visits to the Middle East, Generals Alexander and Montgomery were brought into that theatre of war. This decision was taken by the Minister of Defence, after he had had an opportunity of examining on the spot the problems of our Armies in the Middle East. No one doubts the wisdom of his decision. No one who knows anything about the facts of the case will say that that decision could have been taken from an office in London. I could tell the House of Commons many other great advantages which we have derived from the Prime Minister’s journeys but I had better not usurp the functions of the historians.

“In the best company”

I think it is a good thing for prime ministers that they should go into the front line and see the troops, and the soldiers, who matter most, like to see them. I daresay some hon. Members of this House remember that, in the last war, some suggestions were made by timid French Ministers to M. Clemenceau that, owing to the Germans having a big gun that shelled Paris, they should leave that city for a safer place.

They discovered for the first time that the old Tiger was amenable. He said, “Yes, let the Government leave Paris. Let it go to the front.” It was a very sound piece of advice. If men like Clemenceau lived in this generation, France would not be in its present predicament.

“Other kinds of risk”

I will give another reason why the Prime Minister should renew his vitality by visiting the fighting men. I doubt whether anyone in this House has any knowledge of the appalling burden of work borne by the Prime Minister. He labours over sixteen hours a day, and I should say that his daily routine is more dreary and arduous than has ever fallen to the lot of any man. There are, I suppose, degrees in risk-taking, but I hold that working long hours in a frowsy office is much more dangerous to a man’s health, than going to sea under the protection of the Royal Navy, or being wafted to far countries by the Royal Air Force. There are other kinds of risk in leading a sedentary life. A sizeable number of bombs have been dropped very near the Prime Minister’s office home in Whitehall.

The conclusion of the whole matter is that, in war, no one can avoid risk. For this reason, the Prime Minister’s colleagues are always pleased when he gets out in the fresh air, and gladdens his heart by contact with the fighting men. The Prime Minister has run risk in this war, and he may have to run many more. There is no sacrifice of health or of comfort that he will not make in the service of Britain. He has been the leader of a brave nation, in the darkest hours of its history, and no one can deter the Prime Minister from taking risk if he feels that, by doing so, he can do something to save the precious blood of our fighting men, who are our saviours and, I hope, will be our redeemers.

“Through joy and blindness…”

Neither the hon. and gallant Member nor anyone else can persuade the Prime Minister to wrap himself in cotton wool. He is the enemy of flocculence in thought, word or deed. Most humbly do I aver that, in years to come, a grateful and affectionate people will say that Winston Churchill was raised to leadership by destiny. Men of destiny have never counted risk.

The best way of answering the speech the hon. and gallant Member made today, and I do not complain of it except that I thought that in one or two parts it was in rather bad taste—he says I am his constant opponent and he is quite right to have a little crack at me—is to repeat the words of a young friend of the Prime Minister’s who gave his life for his country in the last war. I am referring to Captain Julian Grenfell, who wrote:

Through joy and blindness he shall know,

Not caring much to know, that still

Nor lead nor steel shall reach him, so

That it be not the destined will.

And now I must abandon poetry and come back to the harsh facts of our present life. I tell the hon. and gallant Member that nothing said here today will make me take the unnecessary risk of trying to persuade the Prime Minister not to take risks.