“British Miscalculations: The Rise of Muslim Nationalism” – by Isaiah Friedman 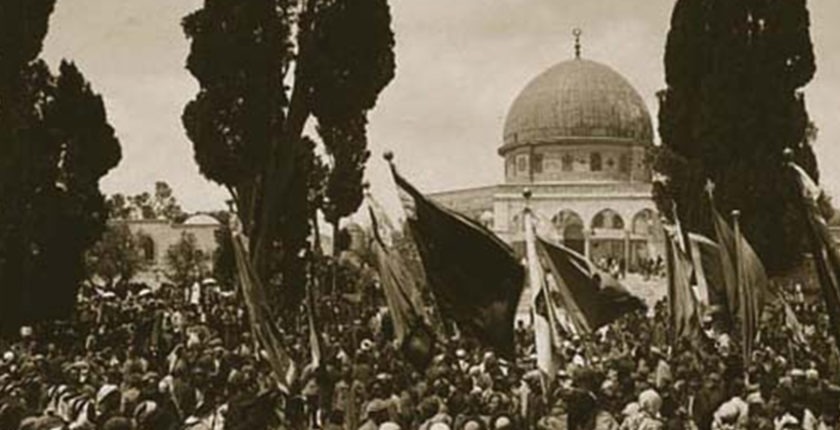 Even as the world marks the centenary of World War I, the Middle East is still rife with conflict. After the war, and the final collapse of the Ottoman Empire, when Western powers attempted to reshape the region, “Europeans and Americans were the only ones seated around the table when the decisions were made,” wrote the historian David Fromkin in his seminal book on the making of the modern Middle East.1

Isaiah Friedman, professor emeritus at Israel’s Ban-Gurion University, joins Fromkin in reminding us how much more there was to know of the Arabic and Islamic world than the British and Allied powers were aware of or willing to admit in those frenzied and important times.

Churchill acknowledges in his World War I memoirs that “statesmen in crisis…have often to take fateful decisions without knowing a very large proportion of the essential facts” and that he could recall “no great sphere of policy about which the British Government was less completely informed than the Turkish.”2

Friedman employs a cascade of primary sources to fill in the gaps of what these uncomprehending actors, both generals and statesmen, failed to grasp as they buffeted the people of the region, coping with nationalist movements and the “independent policy” of their own allies (257).

Friedman studies Britain’s relations with parts of the newly-dismembered Ottoman Empire from 1918 to 1925. The tale unfolds when Churchill was Secretary of State for War and Air (1919–21) and Secretary of State for the Colonies (1921–22). Friedman also dedicates a chapter to the disastrous British campaign in Mesopotamia from 1914 to 1917, and does not go much beyond 1922. He effectively interweaves official British reports with the thoughts and activities of Arab leaders. The striking contrast between what the British knew and the reality on the ground highlights the importance of advice from cabinet members like Churchill and “men on the spot,” like the intelligence officer and military strategist, Colonel Richard Meinertzhagen.

Had their advice been heeded, Friedman suspects it might have enabled Britain and the Allies to craft a more friendly peace with the Middle East. But their voices could not overcome more powerful visions based on faulty foundations. Instead, Friedman argues, a “basic misconception of Arab sensibilities sparked a flame of religio-nationalist feeling that finally drove the European powers out of the Middle East” (17). When time was ripe for peaceful discussions between leaders of the region, Churchill wrote in The Aftermath, “every day’s delay in these loosely knit but inflammable communities was loaded with danger.” The Allies buried their heads in the soon-to-be-stillborn Treaty of Sèvres, while “unfriendly elements loaded their rifles and made plans.”

Friedman’s knowledge of Arab societies and their leaders, like Mustapha Kemal, founder of modern Turkey, and the Emir Feisal, whose “record” as ruler of Iraq “was grim” (201), is his strength. But at times, his portrayal of British politicians is two-dimensional. Churchill stands out in Friedman’s pages, as he did in Fromkin’s, as a figure of energy, genius, and prescience. Churchill’s growing concern about the unfolding “Turkish situation” (98–99) is mentioned and his disagreements with Prime Minister Lloyd George and Foreign Secretary George Curzon are revisited.

The persuasive conversations in London between Prime Minister Lloyd George and Kemal’s foreign minister, Bekir Sami Bey (Kundah) are described at length (244–48) but failed to halt the nightmarish Greek invasion of Smyrna (now Izmir) which, Churchill wrote, caused “all the half raked-out fires of Pan-Turkism…to glow again.” The invasion is described using official accounts and those of journalists and other witnesses. Churchill wrote this “rash and fatal” step led to “a new turning-point in the history of the peoples of the Middle East.”

Friedman casts Churchill as one of the most thoughtful members of the British Cabinet, who was “concerned about Britain’s standing in the Muslim world” (xiii) but who failed to persuade the Cabinet to depart from its fatal policies. Churchill is cast as hero during the 1920 rebellion in Mesopotamia, when he “saved the situation” by being “not only sympathetic but helpful…responding to Haldane’s plea to send reinforcements to the beleaguered British garrisons” (191). Friedman forgets to mention Churchill’s new status as Secretary of State for the Colonies near the end of the book, and barely discusses the 1921 Cairo Conference which laid down the borders of the modern Middle East. Nor does he mention the existence of the Middle East Department in the British government. He makes the debatable argument that it was Sir Percy Cox, high commissioner of Iraq, who “in the final analysis…shaped the future destiny of Mesopotamia, not Churchill” (195). While his portrayal of Churchill, as with some of the other British politicians, is not complete, the picture he paints is still worth reading.

Friedman’s dense and academic account will be most palatable to the specialist or diligent scholar. Many in his cast of characters receive no introduction, or are introduced long after their first mention. The reader will suspect it wasn’t lack of knowledge but perhaps exuberant carelessness that led the author to omit such details, or to insert them haphazardly. Numerous typographical errors and repetition of passages are irritations in a study of such complex times, while errors—such as confusing the date of Curzon’s resignation from the Foreign Office in January 1924 with that of his death in March 1925—are harder to forgive but less frequent. Despite these imperfections, the book is a formidable work of scholarship which would be even better if it were corrected and improved for a second edition.

For more on Churchill and Islam, see Did Churchill Wish to Convert to Islam.

1 David Fromkin, A Peace to End All Peace: The Fall of the Ottoman Empire and the Creation of the Modern Middle East, (New York: Holt, 2009)