Churchill and His Military Commanders – Part 1 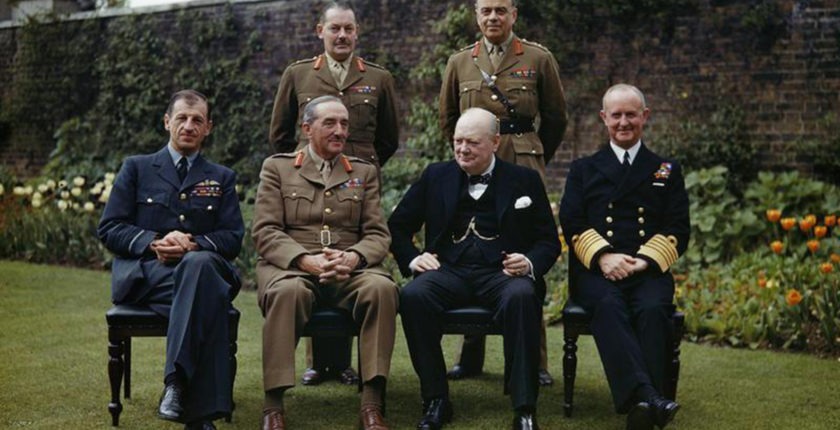 “The generals had in mind a concept of civil-military relations to which many still, amazingly, pay lip service: a world in which civilians provide resources, set goals, and step out of the way to let professionals do their work. War statesmanship, in Churchill’s view, focused at the apex of government an array of considerations and calculations that even those one rung down could not fully fathom.”

G.R. Elton wrote: “There are times when I incline to judge all historians by their opinion of Winston Churchill: whether they can see that, no matter how much better the details, often damaging, of man and career become known, he still remains, quite simply, a great man.” 1

The spate of criticism represents merely one of several waves of postwar attacks on Churchill as warlord. The first surge of criticism came primarily from military authors, in particular Churchill’s own chairman of the Chiefs of Staff, and Chief of the Imperial General Staff, Alan Brooke. The publication of his diaries in the late 1950s shocked readers, who discovered in entries Brooke himself retrospectively described as “liverish” that all had not gone smoothly between the prime minister and his generals. A fresh round of controversy was spurred by publication of the unexpurgated diaries in 2001.

In his first published work, Brooke withheld some of the more pointed criticisms of the Prime Minister, which he often wrote after late-night arguments with Churchill. If anything, his anger grew as the war went on. On 10 September 1944 he wrote in his diary (an entry not known until the 2001 version):

[Churchill] has only got half the picture in his mind, talks absurdities and makes my blood boil to listen to his nonsense. I find it hard to remain civil. And the wonderful thing is that 3/4 of the population of this world imagine that Winston Churchill is one of the Strategists of History, a second Marlborough, and the other 1/4 have no conception what a public menace he is and has been throughout the war! It is far better that the world should never know and never suspect the feet of clay on that otherwise superhuman being. Without him England was lost for a certainty, with him England has been on the verge of disaster time and again…Never have I admired and disliked a man simultaneously to the same extent.2

Others expressed themselves in language more temperate, but had, one suspects, no less severe opinions. Many of the military commanders of World War II came away nursing the bruises that inevitably came their way in dealing with Churchill. They deplored his excessive interest in what struck them as properly military detail; they feared his imagination and its restless probing for new courses of action. But perhaps they resented most of all his certainty of their fallibility.

Norman Brook, secretary of the Cabinet under Churchill, wrote to Hastings Ismay, the former secretary to the Chiefs of Staff, a revealing observation: “Churchill has said to me, in private conversation, that this increased civilian authority was partly due to the extent to which the Generals had been discredited in the First War—which meant that, in the Second War, their successors could not pretend to be professionally infallible.”3

Or as Churchill himself wrote when deprecating the American proposal for appointing a single Supreme Allied Commander for the war in Northwest Europe: “This all looks very simple from a distance and appeals to the American sense of logic. However in practice it is found not sufficient for a Government to give a General a directive to beat the enemy and wait to see what happens. The matter is much more complicated. The General may well be below the level of his task, and has often been found so.”4

One broad criticism of Churchill as warlord was thus that he meddled, incurably and unforgivably, in the professional affairs of his military advisers. A second wave of criticism comes from those who have pored over the documents at some distance from the actual events. Thus, David Reynolds writes of Britain’s “decision” to fight on in 1940 as “right policy, wrong reasons.” Writing of Churchill elsewhere as “a romantic militarist,” he deplores with mock pathos the fate of “young whippersnappers who have the temerity to read the documents and then ask awkward questions!”5

Other historians have less resort to humor. Martin Kitchen claims Churchill was “seldom consistent and was easily carried away.”6 Small wonder, then that, according to Sheila Lawlor,  “the conduct of war emerged, not from any one “grand plan” or strategy, but out of “a series of conflicting and changing views, misunderstandings, personal interests and confusions.”7 In the end, in Kitchen’s view, Churchill, “like all men, however great, was powerless to alter the great decisions of history.”8

For the new historians, it would seem that Churchill’s sins have to do less with bullying and meddling—few contemporary scholars are inclined to carry a brief for generals—than with lack of foresight or inability to stick to a plan. When Churchill was right, it was for the wrong reasons; if he changed his mind, and he did so frequently, it was a sign of febrile instability; if he described the strategic position of the Allies in compelling prose, it was a sham that covered up chaotic forces that he had neither the wisdom nor the fixity of purpose to master.

Thus we have two indictments, no less severe than those of the generals: Churchill failed as strategist because he did not devise a coherent strategy for the war. Perhaps no one can, some of these historians might argue; in that case, Churchill deserves removal from his pedestal because he misled his contemporaries and at least one succeeding generation into believing otherwise.

One may sympathize with both critics. The generals suffered the indignities of working with a man who kept them up late while hounding them with questions of detail. Even less forgivable, one suspects, were such barbs as his remark about confronting, in his Chief of Imperial General Staff, “the dead hand of inanition,” or his observation, on watching the Chiefs of Staff file out of a meeting, “I have to wage modern war with ancient weapons.”9 Bearing the responsibilities they shouldered, knowing better than anyone the strains suffered by a force too often fighting at a disadvantage, no wonder they sometimes seethed with resentment.

The historians have some excuse for their impatience. The stifling weight of pro-Churchill orthodoxy that dominated not only historiography but public opinion for decades after the Second World War provoked a natural reaction from a class naturally skeptical of political leaders. All the more irritating to many professional historians have been the contemporary political leaders who have declared their reverence for Churchill. Surely, some denizens of faculty clubs and senior common rooms must think that anyone acclaimed as a hero by Caspar Weinberger, Margaret Thatcher or George W. Bush cannot deserve Churchill’s uniquely glorious reputation!

The generals may have suffered from their excessive closeness to a man who made excruciating demands upon their energies, time, and patience. The professors may have let the temptations of donnish life, which rewards swipes at historical orthodoxy and deprecates the Great Man theory of history, get the better of them. But a deeper explanation for the antipathy of these two groups to Churchill lies, I suspect, in their picture of what it is to make strategy.

The generals had in mind a concept of civil-military relations to which many still, amazingly, pay lip service: a world in which civilians provide resources, set goals, and step out of the way to let professionals do their work. In such a view, a politician has no more business getting involved in strategy than a dental patient has in mixing the amalgam that goes into a cavity. Brooke’s exasperation speaks for more than one military leader:

After listening to the arguments put forward during the last two days I feel more like entering a lunatic asylum or nursing home than continuing with my present job. I am absolutely disgusted with politicians [sic] methods of waging war! Why will they imagine they are experts at a job they know nothing about! It is lamentable to listen to them!10

The anti-Churchill historians, on the other hand, either think that strategy cannot exist, or that when done properly it consists of pristine and unchangeable blueprints. Most of them see so much muddle and inconsistency that they find the idea of any fixed policy laughable; others scorn statesmen for failing to reduce the problems they confront to the neatness of a graduate term paper.

In the years after the 1991 Iraq war, in which politicians (seemingly) left military matters in the hands of generals and won a stunning victory thereby, such views may have seemed more attractive than they might have in the early 1940s. They seem less so in 2016, after a decade of stumbling and setback in that country and Afghanistan. In fact, both “frocks” and “brass hats” misgauge the real problem of formulating strategy, which Churchill himself described more aptly than anyone. It has become the fashion to scorn Churchill’s memoirs of the First and Second World Wars as false accounts of his activities and their consequences, and such caution is well taken. But Churchill’s writings in these volumes, and in his biography of Marlborough, have a second and more lasting merit as reflections on the nature of war statesmanship.

War statesmanship, in Churchill’s view, focused at the apex of government an array of considerations and calculations that even those one rung down could not fully fathom—a view shared, interestingly enough, by none other than General Charles de Gaulle. War, Churchill wrote in The World Crisis, “knows no rigid divisions between…Allies, between Land, Sea and Air, between gaining victories and alliances, between supplies and fighting men, between propaganda and machinery, which is, in fact, simply the sum of all forces and pressures operative at a given period….”

Churchill’s profound sense of the uncertainties inherent in war suggests that he would have found the notion that one could have a blueprint for victory at any time before say 1943 an absurdity, bred of unfamiliarity with the very nature of war. Moreover, Churchill believed that the formulation of strategy in war did not consist merely in the drawing of state documents sketching out a comprehensive view of how the war would be won, but in the subsequent conduct of a host of detailed activities which together amounted to a comprehensive picture.11

What were the practical consequences of Churchill’s approach to strategy? What exactly is it to make strategy in wartime? One set of activities, of course, has to do with the broad decisions of war: in the case of World War II, for example, when to launch the invasion of France, what weight to place on strategic bombing as a means of defeating Germany, or how much emphasis to put on aid to the Soviet Union.

But undergirding these high-level strategic decisions, on which historians traditionally lavish a great deal of attention, are other, less visible but no less important activities. They involve decision-making about matters of detail—important detail, but detail nonetheless.

Continued in Part 2: The Churchill Method of Command.

Eliot A. Cohen is professor of strategic studies at Johns Hopkins School of Advanced International Studies, and has served as Counselor of the Department of State. He is the author of the prize-winning book Supreme Command: Soldiers, Statesmen, and Leadership in Wartime (Simon & Schuster, 2002)