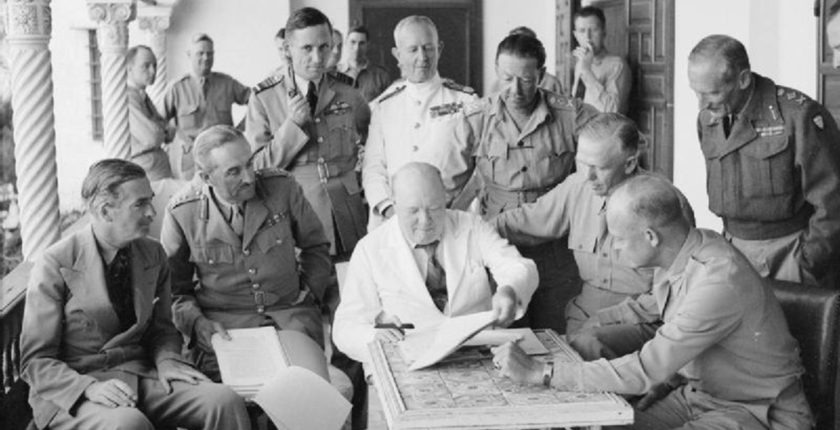 Part 2: The Churchill Method of Command

Churchill exercised one of his most important functions as war leader by holding his generals’ calculations and assertions up to the standards of a massive common sense, informed by wide reading and experience at war. When his military advisers could not come up with plausible answers to these harassing and inconvenient questions, they usually revised their views; when they could, Churchill revised his. In both cases, British strategy benefited. Continued from Part 1.

Perhaps most important among the details crucial to strategic decisions is a continuous audit of the military’s judgment. Churchill, as his generals often complained, kept a close eye on military detail.

On 30 March 1941, for example, Churchill sent General Ismay a note regarding an exercise called “Victor,” which had occurred from 22 to 25 January of that year under the auspices of the then-commander of Home Forces, General Sir Alan Brooke. Churchill’s query went as follows:

1. In the invasion exercise “Victor,” two armoured, one  motorised and two infantry divisions were assumed to be landed by  the enemy on the Norfolk coast in the teeth of heavy opposition.  They fought their way ashore and were all assumed to be in action  at the end of forty-eight hours.

2. I presume the details of this remarkable feat have been  worked out by the Staff concerned. Let me see them. For instance,  how many ships and transports carried these five Divisions? How  many Armoured vehicles did they comprise? How many motor lor ries, how many guns, how much ammunition, how many men, how  many tons of stores, how far did they advance in the first forty-eight  hours, how many men and vehicles were assumed to have landed in  the first twelve hours, what percentage of loss were they debited  with? What happened to the transports and store-ships while the  first forty-eight hours of fighting were going on? Had they completed  emptying their cargoes, or were they still lying in shore off the  beaches? What naval escort did they have? Was the landing at this  point protected by superior enemy daylight Fighter formations?  How many Fighter airplanes did the enemy have to employ, if so, to  cover the landing places?1

The purpose of Churchill’s query became clear in his final paragraph:

All this data would be most valuable for our future offensive operations. I should be very glad if the same officers would work out a scheme for our landing an exactly similar force on the French coast at the same extreme range of our Fighter protection and assuming that the Germans have naval superiority in the Channel…

Clearly, Churchill feared that such exercises fed an assessment of enemy capabilities well beyond what was reasonable.

Brooke replied on April 7th, giving the figures noted by Churchill, including estimates of enemy loss rates (10% in crossing, 5-10% percent on landing), plus the assumption that the Germans would consume petrol and food found on British soil. The Prime Minister responded a few weeks later, noting how much more difficult than this British landings in Greece had proven, and continuing to press his inquiries.2

Churchill noted, for example, that on the last two days of the exercise the British were credited with 432 fighter sorties and the Germans with 1500, although the Germans had farther to fly. He inquired about the amount of warning of an invasion that had been assumed, and asked (without receiving an answer) why the Germans should have been assumed to capture large quantities of petrol on landing in Britain. Gamely enough, Brooke continued to reply, until the exchange petered out in mid-May.

What is the significance of this episode? It is noteworthy, first, that the commander in charge of the exercise, Brooke, stood up to Churchill and not only did not suffer by it, but ultimately gained promotion to the post of Chief of Imperial General Staff (CIGS) and chairman of the Chiefs of Staff Committee.

But more important is Churchill’s observation that “It is of course quite reasonable for assumptions of this character to be made as a foundation for a military exercise. It would be indeed a darkening counsel to make them the foundation of serious military thought.”

At this very time, the Chiefs of Staff were debating the dispatch of armored vehicles to the Middle East. Churchill was arguing—contrary to several of his military advisers (including the then-CIGS, Sir John Dill)—that the risks of invasion were sufficiently low to make the convoy worth the attempt. The convoy went through, losing only one ship to a mine and delivering some 250 tanks to the hard-pressed forces in the Middle East.

By no means did Churchill always have it right. But he often caught his military staff when they had it wrong. Sir Andrew Cunningham, who succeeded Sir Dudley Pound as First Sea Lord, has established a reputation as a critic and victim of Churchill, but without Brooke’s bile.3 But the record shows on more than one occasion that his military judgment was no less open to question.

In the spring of 1944, for example, Churchill beat back Cunningham’s plan for a postwar force (in the words of the naval staff’s paper, “The Empire’s Postwar Fleet”) based on the premise that “the basis of the strength of the Fleet is the battleship….This war has proved the necessity of battleships and no scientific development is in sight which might render them obsolete.”4 Since the destruction of most heavy units of the German Navy, the attack on Pearl Harbor, and the sinking of the Prince of Wales and Repulse in late 1941, Churchill had deplored the navy’s obsession with battleships.

In a similar vein, Churchill regarded the products of the superb British Intelligence system with a combination of interest and skepticism rare in political leaders. When the Joint Intelligence Committee suggested in September 1944 that Germany would collapse by December, Churchill disagreed vigorously and, as it transpired, correctly.5 The Intelligence professionals of the JIC had, by this point in the war, access to outstanding information, and had had the experience of five years of war in which to sharpen their judgment. They were proven wrong, as had been their operational colleagues.

This is not to say that Churchill’s military judgment was invariably or even frequently superior to that of his subordinates, although on occasion it clearly was. Rather, Churchill exercised one of his most important functions as war leader by holding their calculations and assertions up to the standards of a massive common sense, informed by wide reading and experience at war. When his military advisers could not come up with plausible answers to these harassing and inconvenient questions, they usually revised their views; when they could, Churchill revised his. In both cases, British strategy benefited.

Of all the responsibilities that come the way of statesmen at war, the most important may be the selection of those who direct the armies and fleets. Few cares rest heavier on a war leader, and few present greater difficulties. In the case of deciding on a major operation, a war statesmen can consult his own right reason and reams of planning and intelligence material; he has the benefit of advice prepared by large staffs, and he can turn to a variety of experts for their views.

The task of picking generals is far more difficult. The commander who excelled at one level of war leadership may prove incompetent at another, and rarely can one find out except by experience. A prime minister (or, for that matter, a president) may find his ability to seek counsel limited by the cliques in which generals often gather, and their tendency to shelter one another from the wrath of disappointed superiors. Moreover, in wartime the cost of firing a general is high, for they become popular figures upon whom public hopes and fears are built.6

Churchill’s uneasy relationship with his generals stemmed, in large part, from his willingness to pick commanders who disagreed with him—and who often did so energetically. The two most forceful members of the Chiefs of Staff, Brooke and Cunningham, were evidence of that. If he dispensed with Dill, he did so with the silent approval of key officers, who shared his judgment that Dill did not have the spirit to fight the war through to victory. As Ismay and others privately admitted, however, Dill was a spent man by 1941, hardly up to the demanding chore of coping with Churchill.7 “The one thing that was necessary and indeed that Winston preferred, was someone to stand up to him, instead of which Jack Dill merely looked, and was, bitterly hurt.”

If Churchill were to make a rude remark about the courage of the British Army, Ismay later recalled, the wise course was to laugh it off or to refer Churchill to his own writings. “Dill, on the other hand, was cut to the quick that anyone should insult his beloved Army and vowed he would never serve with him again, which of course was silly.”8

It was not enough, of course, to pick good leaders; as a war leader, Churchill found himself compelled to prod them as well—an activity that occasioned more than a little resentment on their part. Indeed, in a private letter to General Claude Auchinleck shortly before he assumed command in the Middle East in June 1941, Dill warned of this, saying that “the Commander will always be subject to great and often undue pressure from his Government.”9 Churchill’s impatience with Auchinleck and Wavell, seemingly unmerited at the time, has become easier to understand now that we know how much of the enemy picture Churchill understood because of ULTRA, the British decrypts of German coded communications.10 Clearly, Churchill viewed one of his most important responsibilities the goading of his commanders into action.

Continued in Part 3: “At the Summit, True Politics and Strategy are One”

Eliot A. Cohen is professor of strategic studies at Johns Hopkins School of Advanced International Studies, and has served as Counselor of the Department of State. He is the author of the prize-winning book Supreme Command: Soldiers, Statesmen, and Leadership in Wartime (Simon & Schuster, 2002).

3 This in part on the strength of Churchill’s memoirs: admirals and generals, no less than prime ministers, have benefited from well-written recollections of their service in government.

6 See a fascinating discussion of this topic by Charles de Gaulle, The Edge of the Sword, Gerard Hopkins, trans. (London: Faber & Faber, 1932), 103.