The Churchill Project - Hillsdale College > Articles > Explore > Churchill Between the Wars > How Churchill Dodged the Flu Pandemic, and Others Were Not So Lucky

How Churchill Dodged the Flu Pandemic, and Others Were Not So Lucky 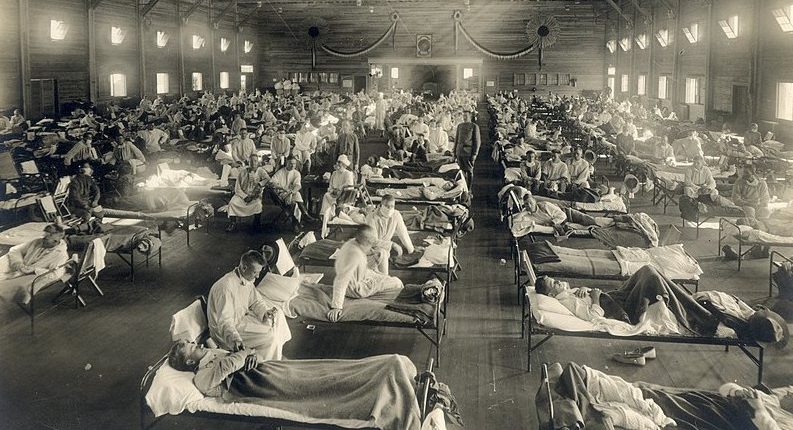 “I feared that the long nights for millions in the crowded street-shelters—only blast-proof at that—would produce epidemics of influenza, diphtheria, the common cold, and what not. But it appeared that Nature had already provided against this danger. Man is a gregarious animal, and apparently the mischievous microbes he exhales fight and neutralise each other. They go out and devour each other, and Man walks off unharmed. If this is not scientifically correct, it ought to be.” —WSC, Their Finest Hour (1949), 217.

As the world grapples with the COVID-19 pandemic and the death toll steadily mounts, a look back is in order. History affords insight and guidance about the impact of deadly contagions on peoples and leaders. How have past leaders, and those they led, responded to the shock of widespread illness, like flu? Have societies been changed by the ravages of disease? How has sickness affected leaders? What part have pandemics played in the rise and fall of great powers? How, indeed, does disease bend the arc of history?

The Greek general and historian Thucydides addressed these questions in his famous history of the Peloponnesian War. Writing almost 2500 years ago, Thucydides made the ravages of a plague’s outbreak a major feature of his tragic narrative of the decline and fall of the Athenian Empire. The plague hit Athens when it was engaged in a desperate struggle against its arch great-power enemy, Sparta. A citizen of Athens, Thucydides witnessed the plague ravaging the Athenian Empire over several years. Perhaps a quarter of the Greek population settled along the shores of the Aegean succumbed. Thucydides himself contracted the disease. He survived to provide a detailed and chilling description its symptoms.

Closer to our own time, a little more than a hundred years ago, the horrific Spanish flu pandemic killed tens of millions of people. It occurred during the final year of the First World War into its immediate aftermath. In the Great War, influenza did not confine itself to one side. It crossed the front lines, visiting victors and vanquished alike. German soldiers trying to break through on the Western Front in early 1918 suddenly became ill. German military leaders maintained that the flu sapped the physical strength of their soldiers. It contributed, they said, to the failure of offensives that would have won Germany the war. They denied that these offensives actually accelerated Germany’s defeat. They found in the flu a handy excuse to cover up and shift the blame for their own mistakes in strategy.

On the other side of the trenches, the spreading flu pandemic battered the American army mobilizing at home and deploying overseas. Almost as many American soldiers died from influenza as were killed in combat. Among Britons, an estimated 150,000 died from influenza. That number surpasses British deaths in the two hideous battles, the Somme in 1916 and Passchendaele in 1917. As in ancient Athens, the pandemic afflicted all levels: leaders were not immune.

In September 1918, the flu hit Britain’s Prime Minister David Lloyd George in Manchester. He had traveled there for speeches and ceremonies. Too ill to carry on, the 56-year-old premier canceled his public events. The illness kept him in bed for two weeks of  a critical period in the war. The German army was getting mauled on the battlefield and the prospect of the war’s end beckoned. Frustrated and angry, Lloyd George saw himself as essential to negotiate terms for an armistice. He could not afford to be an invalid at such a momentous time. Bedridden, the PM was “chafing like a caged lion.”

Lloyd George’s medical condition was touch and go. His family feared for his life. His wife Margaret, who remained close at his side, contracted it; so too did his secretary and mistress, Frances Stevenson.

“He never was the same”

President Woodrow Wilson became seriously ill with the flu in April 1918. His doctor Cary Grayson recorded Wilson’s “violent paroxysms of coughing, which were so severe and frequent that it interfered with his breathing.” Wilson’s fever spiked to over 103. Grayson feared for the President’s life and his wife Edith “was dreadfully alarmed.”

The 62-year-old President was stricken at an inopportune time. He was then engaged in diplomatic battles with the French, Italians, and Japanese over peace treaties. Starting to recover, Wilson insisted on working from his hotel suite. He requested that, “unless Clemenceau, Lloyd George and Orlando were afraid of the disease,” the negotiations should continue in his bedroom. To what extent Wilson’s illness affected his judgment over the peace treaty remains disputed by historians. His staff, however, saw a marked change in the President’s behavior. One aide thought “something queer was happening in his mind. One thing was certain: he was never the same.”

If the flu had not hit Wilson, would he have made the Treaty of Versailles more conciliatory toward Germany? Would more moderate treaty terms have better reconciled the Germans to their defeat? We cannot know the answers to these questions. Germany had started the war. A stable peace required that Germany not possess the power to wage future wars of aggression. For all its flaws, the Versailles settlement did not make another world war inevitable. The Great Depression and a vicious nationalist extremist were needed to do that. Thus the impact of the flu on Wilson’s judgment was likely not as great as sometimes alleged.

“We are with you to the end”

Woodrow Wilson’s Assistant Secretary of the Navy, 36-year-old Franklin Delano Roosevelt, traveled to Europe during the summer of 1918. He was part of an American fact-finding mission to determine how best to support Britain and France. Germany was then on the offensive, hoping to break the Western Front before American forces could arrive in strength. At a dinner in London, FDR addressed an audience of British notables, including Churchill. “We are with you to the end,” he told them.

Alas, as Roosevelt departed from Europe for home, he became ill with a high fever. During the voyage he developed pneumonia in both lungs. Arriving stateside, he was so ill that he had to be carried in a stretcher off the ship. Secretary of the Navy Josephus Daniels was concerned for Roosevelt’s life. He ordered an ambulance to convey FDR from the ship to his mother’s home in New York City. While recuperating, he received a get-well note from his cousin, former President Theodore Roosevelt. (During Franklin’s convalescence his wife Eleanor unpacking his luggage, found love letters from his “other woman,” Lucy Mercer. While Roosevelt recovered and divorce was avoided, Eleanor would never forget her husband’s betrayal.)

“I am in for influenza”

One prominent leader who managed to escape from the flu Winston Churchill, Roosevelt’s future coalition partner in the next world war. Influenza was all around Churchill. As Minister of Munitions in the British government, he was close to the stricken Lloyd George. And Churchill had attended the Roosevelt dinner in London, where they met for the first time.

The illness veered closer in February 1919 when it struck Air Marshal Sir Hugh Trenchard, whom Churchill had selected to serve as the Royal Air Force’s chief of staff. Then came the turn of Churchill’s family. In March 1919, while he was at the Paris peace negotiations, his wife wrote: “I’m afraid I am in for influenza. My temperature this morning is 102.” Poor Clementine could not find a doctor to attend the family because physicians and nurses were treating so many ill people. Soon the children’s Scottish nanny Isabelle was infected, delirious with fever. She attempted to take baby Marigold, then only a few months old, into her bed. Clementine rescued the infant and nursed Isabelle, who nevertheless passed away. She desperately fretted that Marigold might have caught the disease. When Churchill returned from France, he stayed away from the stricken household to avoid exposure to the contagion.

Marigold Churchill survived the flu, but not septicemia, which took her life in August 1921. The flu however was not done with the Churchills. Clementine and their three remaining children came down with it in December. Winston was in Cannes, working on The World Crisis. “It is providential you went away as it would have been most annoying if you had caught it,” Clementine wrote. “I do hope you are having a delicious time.” Sick at home, she could only dream of the south of France.

Struck by his wife’s misfortune, Churchill wrote back: “What a cataclysm! Poor darling I expect you have had an awful time. But as usual you have risen to the occasion & your letter about it all is Napoleonic.” From Churchill, to be described as Napoleonic was a high accolade, even if we do not typically associate the French emperor in the role of a mother caring for a sick child and a wife seeking to reassure her husband.

Churchill could not help but feel pangs of guilt that he had again dodged the flu bullet and was not around to help care for his family. “I feel a recreant hastening off to the Riviera,” he wrote, “and dwelling among these flesh pots while you are on the rack at home.” Clementine had arranged for nursing staff to watch over the children, so Winston recommended she get bed rest. “A week on y[ou]r back will do you all the good in the world. Then come out here to recuperate in this delicious sunshine and let me mount guard in y[ou]r place over the kittens.” Little did they know, but the exhausted Clementine was likely pregnant with their youngest daughter Mary.

Churchill avoided flu, but did come close to death with appendicitis in 1922: The operation, he recalled, was “performed only just in time, and an abdominal wound seven inches long.” It was another instance of bad timing. An election was on and he could not campaign. His wife campaigned in his Dundee constituency, but he lost decisively. His Liberal Party was also crushed, never to recover. The experience gave rise to his famous remark. “In the twinkling of an eye I found myself without an office, without a seat, without a party, and without an appendix.”

These stories of leaders and illnesses raise sobering questions about the unfolding of history. What if the flu had taken Franklin D. Roosevelt as one of its victims in 1918? Suppose a burst appendix had killed Winston Churchill in 1922? Who would have served as president through the Great Depression and the Second World War? As for Britain, who would have better led the people during their “finest hour,” standing up to the Nazi menace?

It is of course academic to post these uncomfortable questions. But it does serve to highlight the role of chance, of individual leaders, and the role of illness in history. Churchill and Roosevelt did survive. They lived to save Western Civilization from falling into a dark age as awful to imagine as any contagion. We are fortunate that their robust constitutions kept them alive.

John H. Maurer serves as the Alfred Thayer Mahan Distinguished University Professor of Sea Power and Grand Strategy at the Naval War College in Newport, Rhode Island. This article is excerpted from a longer piece in The National Interest, by kind courtesy of the author.