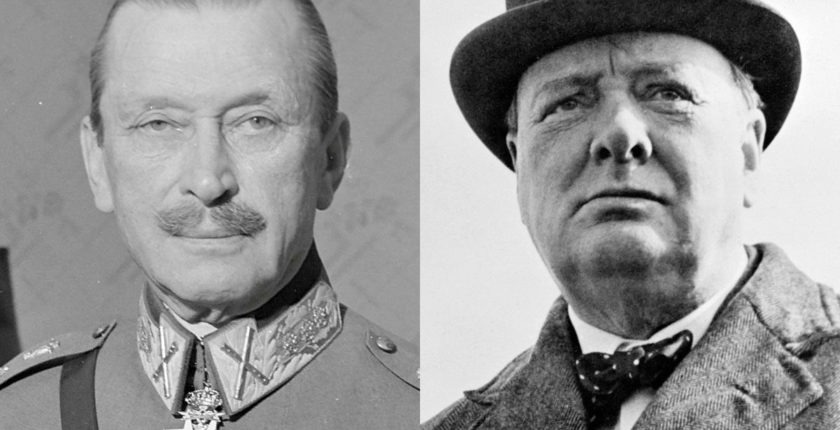 Winston Churchill and Marshal Carl-Gustav Mannerheim, the father of modern Finland, had much in common, which engendered mutual admiration. They were both aristocrats, cavalrymen, immensely well-travelled (including in India). Both were Great War soldiers and committed anti-communists. Each made profoundly stirring public pronouncements and continued to lead their countries into their late old age. They met only twice—and for most of the Second World War were formally enemies. Their relationship was not one Churchill could admit to publicly after June 1941, when Finland went to war against Britain’s ally, the Soviet Union.

Mannerheim served the Czar in high military office, pleading the case of Finland in royal audiences. On leave in St. Petersburg in 1917, he witnessed the February revolution and the new provisional government. However, its leaders did not regard him as a supporter and he decided to retire. Soon after the Bolsheviks took over in October, Finland declared independence, and Mannerheim was given command of its small army.

Churchill admired those who fought against the Bolsheviks; Mannerheim was in the forefront. In his 1929 book The Aftermath—the fourth volume of his Great War memoirs covering the postwar decade—Churchill mentions Mannerheim’s command of the White Finnish forces which successfully defeated what he describes as “a Red Terror.”1 However, he omits the part that he himself played in failing to help Mannerheim’s proposed march in 1919 on St Petersburg (then called Petrograd).

On 5 May 1919, Churchill sent a telegram from the War Office to  Sir Henry Wilson–Chief of the Imperial General Staff– at the Paris Peace Conference. Britain, he wrote, should not offer support to Mannerheim’s attack on Petrograd. Churchill feared it would be “a hopeless failure.”2 Five weeks later, Churchill received a telegram from General Sir Hubert Gough, whom he had sent to lead a British mission to the Baltic. “Mannerheim is dying to attack Petrograd,” Gough reported. “But on the other hand, Mannerheim’s own position in Finland is not too firm and he is certainly risking it by any such action.”3 On 5 July, Churchill told the War Cabinet that Britain had turned down Mannerheim’s requests for military aid because it would probably be “an enterprise of a highly speculative character.”4

The attack was not made, so we can never know whether Mannerheim might have succeeded; even the Wehrmacht failed in its 900-day-long siege of the city in the early 1940s. In 1919, Churchill was not going to help Mannerheim, despite saying later that he had wanted “to strangle Bolshevism in its cradle.” On 24 August 1919, Churchill told Prime Minister David Lloyd George, Foreign Secretary Arthur Balfour, and Lord President of the Council Lord Curzon: “We have not thought it right to take any responsibility for encouraging the Finns to attack Petrograd and meanwhile Mannerheim has disappeared.”5

Mannerheim was, nevertheless, still capable of undertaking important private visits for the Finnish Government. On 20 December 1919, Churchill and Sir Henry Wilson had a long meeting with Mannerheim on his return from Warsaw. There Mannerheim, though a private individual, had undertaken a secret mission to encourage the Polish Government to attack the Bolsheviks. In London, presumably in the War Office, Mannerheim told Churchill and Wilson that the White Russian leader General Deniken ‘was going to be beaten out of the field.’6

Above all, his paramount interest was Finland. In his diary, Wilson noted of “Mannerheim the Finn”: “He hates and distrusts the Russians but has sufficient intelligence to see that if Deniken is beaten it will be the Finns’ or the Poles’ turn next.”7 (That night Churchill and Wilson dined at The Other Club at the Savoy Hotel, where they sent a telegram to fellow Club member Sir John French congratulating him on escaping a Sinn Fein ambush in Dublin.)

On 10 February 1920, Lloyd George publicly ridiculed plans that Churchill supported for a grand alliance—Finns, Deniken’s White Russians, Latvians, Lithuanians, Estonians, Poles, Japanese and Romanians—to, in his words, “scorch Bolshevism out.”8 The Prime Minister rhetorically asked MPs: “Is there anyone here or anywhere else who will do it? Will Finland do it? General Mannerheim may be a very influential man, but he is not Finland.” Lloyd George added that the Baltic States were making peace with the Bolsheviks, that Japan “certainly will not” fight, and that Romania had her own border trouble with Hungary. Without British or American support, all hope of strangling Bolshevism evaporated.

In July 1920, Finland adopted a republican constitution. Mannerheim ran for president, lost, and again retired. In December, after a five month negotiation, Finland and Russia concluded hostilities with a peace treaty.

Thereafter there was no interaction between Churchill and Mannerheim until they met for dinner on 30 January 1936. Their host was Patrick (later Sir Patrick) Donner, Conservative MP for Islington West who, like Churchill, opposed the India Bill. Donner was of Swedish-Finnish descent. His father, Ossian Donner, was the first Finnish envoy to London from 1919 to 1925.

Mannerheim used the opportunity of what he later called an “interesting conversation” to complain that Varldskrigen, the 1931 Swedish edition of Churchill’s war memoir, The World Crisis, presented the Finnish War of Liberation “in a strongly pro-German spirit.” This, according to a letter Mannerheim wrote Donner on 27 April 1936, left Churchill “unpleasantly surprised.” Accordingly Churchill asked Mannerheim to write him a more accurate version for future editions.9

Det Stora Kriget, a Swedish illustrated edition which included Finland from the text of The Aftermath, was about to appear in its third and final volume. Churchill made the changes Mannerheim proposed. From Helsinki on 3 July 1936 Mannerheim thanked him “for your great kindness in the matter, which, as you will surely understand, is lying us Finns close at heart.” He signed off in his own handwriting, “Dear Mr. Churchill, sincerely yours, G. Mannerheim.”10 Six days later Churchill replied that it was “a great pleasure” to make the alteration. He added: “I have often thought about our talk at Patrick Donner’s house. I hope we shall meet again, and be united in our endeavours to prevent the whole world being ruined and afterwards Bolshevised by another hideous war.”11

Or course, it was not to be and on 30 November 1939 Finland and the USSR were embroiled in the terrible Winter War. Having failed to support Finland against Russia in 1919, Churchill wanted to investigate helping the Finns in this new struggle. At a Cabinet meeting on 12 February 1940, Churchill, then First Lord of the Admiralty, suggested sending a British Army officer, Brigadier Christopher Ling, to Helsinki. His assignment would be “to give moral support to Marshal Mannerheim, and to provide us with full and accurate information.”12

Churchill recognized that the Finns needed thirty or forty thousand men to help fight the Russians. But, he told his ministers, “it would be impracticable to pass anything like this number of volunteers through [neutral] Sweden.” The Finns, he added, needed “men who could work in the snow and of these we had so far only collected 360.” Even though “Aid to Finland” was on the agenda at every Cabinet meeting for sixty days, “Nothing came of it at all.”13 In a March 1940 peace treaty, Finland lost 11% of its territory and 30% of its industrial base.

Failure to aid Finland outraged Harold Macmillan, a Conservative MP and Churchill supporter who knew and admired Mannerheim. In his memoirs, Macmillan quoted Mannerheim as saying the Winter War witnessed “a Thermopylae every day.” The Finns, he wrote, were so short of artillery shells that they could not afford to fire them during Russian attacks on the Mannerheim Line.14 It reminded Macmillan, who had fought valiantly on the Western Front in the Great War, of the terrible shell shortages of May 1915, which helped bring down the Asquith Government.

After Germany attacked Russia in June 1941, Mannerheim declared what the Finns call the “Continuation War” on the USSR. Since Russia was now his ally, Churchill was forced by Stalin to declare war against Finland. Churchill privately opposed this, as is clear from his extremely polite telegram to Mannerheim on 28 November: “I am deeply grieved at what I see is coming, that we shall be forced in a few days out of loyalty to our ally Russia to declare war upon Finland.”15

Churchill hoped that Finland might be able to stop its advance against Russia in 1940 at the 1939 borders. “I wish I could convince Your Excellency that we are going to beat the Nazis,” he added. ‘”My recollection of our pleasant talks and correspondence about the last war lead me to send this purely personal and private message for your consideration before it is too late.”

Mannerheim’s reply was similarly gentlemanly, but uncompromising. “I thank you for your courtesy in sending me this private message. I am sure you will realise that it is impossible for me to cease my present  military operations before my troops have reached positions which in my opinion would give us the security required.” (He meant positions beyond Finland’s 1939 borders.) Mannerheim admitted he would be “deeply grieved” if his attempt “to safeguard Finland” led to war with Britain. He closed by saying, “It was very kind of you to send me a personal message in these trying days, and I have fully appreciated it.”16 Was there ever such a polite declaration of war between two countries?

Britain declared war on Finland on 3 December 1941. At the War Cabinet meeting, Churchill said this “would not assist either our cause or that of the Russians.”17 Macmillan agreed. “I have always thought that this was an error,” he later wrote. “Its only object was to appease the Russians. But was the gesture necessary?” The Americans, he noted, did not remove their diplomatic representatives from Helsinki when they entered into alliance with Russia after Pearl Harbor. Instead, they tried to persuade Mannerheim to disengage from his alliance with Hitler.

Mannerheim did disengage, in September 1944, when Finland signed a peace with the Soviets that rendered up Karelia and Petsamo. The peace terms were, in Macmillan’s words, “hateful and wounding, but not dishonourable.” He went on to point out that of among all of Russia’s western neighbours, Finland was the only one to retain her freedom after the war.

Mannerheim stepped down as Commander-in-Chief in January 1945 and as Regent-President in March 1946, aged 78. The West took no actions against him for having been Hitler’s ally for three years. Winston Churchill, and every other objective observer, saw in Mannerheim the savior of his country. He acted at a time when Finland was intolerably squeezed between the two most evil and violent totalitarian dictatorships in history.