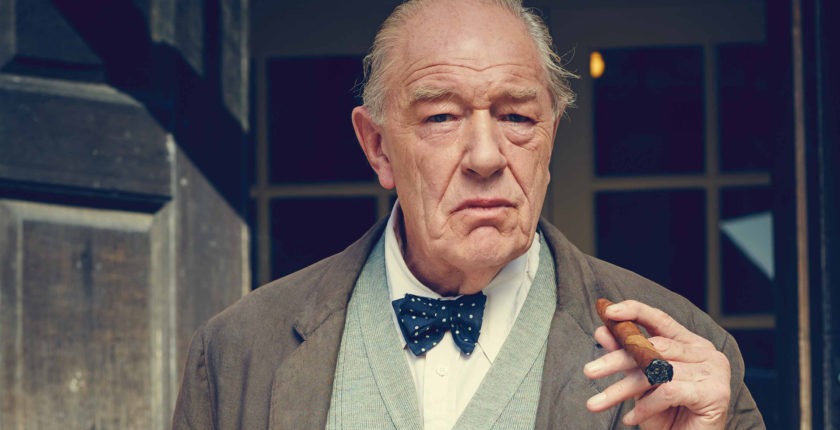 PBS and ITV have succeeded where many failed. They offer here a Churchill documentary with a minimum of dramatic license, reasonably faithful to history (as we know it). Churchill’s Secret limns the pathos, humor, hope and trauma of a little-known episode: Churchill’s stroke on 23 June 1953, and his miraculous recovery—while for weeks his faithful lieutenants secretly ran the government. To paraphrase Dr. Johnson, the film is worth seeing, and worth going to see.

Sadness attends our mortality, death comes to us all. Sir Winston teetered on the edge in 1953; only his inner circle knew how close he had come. Of course the “secret” has been public now for fifty years, since publication of his doctor’s diaries in 1966. But at the time it was a secret: not a word leaked, thanks to his family, staff, and three press barons—Beaverbrook, Bracken and Camrose. Private secretary John Colville wrote: “They achieved the all but incredible, and in peace-time possibly unique, success of gagging Fleet Street, something they would have done for nobody but Churchill.”1

Exactly how ill the Prime Minister really was I leave to experts, but many close to him thought he would die. Colville wrote: “he went downhill badly, losing the use of his left arm and left leg.”2 In the film, Moran (Bill Paterson) is urgently summoned to Downing Street, where he finds the PM singing incoherently: “I’m forever blowing bubbles.” Great heavens, I thought, they are going to link this to Marigold….

“Bubbles” was the favorite song of a 2 1/2-year-old daughter who died in 1921. Rarely mentioned, Marigold was buried in a corner of their hearts. With poignant flashbacks, the film unfolds their memories of the tragic loss they still deeply felt. In a moving scene, Clementine tearfully recounts Marigold’s story to her husband’s nurse. As a device for portraying her and Winston’s humanity, this is a touch of genius.

The nurse, Millie Appleyard (Romola Garai) is the film’s only fictional character: meant to represent “the help”—too numerous to catalogue in the space of a short film. Millie has a Yorkshire accent but her father, she tells Churchill, was Welsh: “and no fan of yours.” (WSC reluctantly allowed deployment of troops during the Welsh miners strike in 1910.) Devoted to his recovery, but always her own woman, Millie sees the job through, confronting all challengers—a perfect foil for Churchill, his wife, and their sometimes obstreperous family.

Critics who say PBS overly dotes on British drama, from Upstairs Downstairs to Downton Abbey, forget that UK theatre has unequalled depths of talent. There are so many exceptional actors that casting lookalikes for a historical film is a relative breeze. In Churchill’s Secret, the casting is superb.

Michael Gambon is an excellent Churchill: more drawn, less cherubic, but perfect in his mannerisms and bearing. One soon stops seeing Gambon and begins seeing WSC. Lindsay Duncan as Clementine is almost up to the standard set by Vanessa Redgrave, brilliant alongside Albert Finney’s Churchill in “The Gathering Storm” (2002)—and far superior to Sian Phillips, the great Robert Hardy’s opposite number in “The Wilderness Years” (1981).

Supporting actors are outstanding. Jock Colville (Patrick Kennedy) and Christopher Soames (Christian McKay)—who bore the burden of state in those anxious days—could not be more lifelike. R.A. “Rab” Butler (Chris Larkin)—a Chamberlainite who had never liked and wanted to replace Churchill, whom he had hoped would retire since 1945—is the same weak reed he was in life. “I hope you don’t think of me as an enemy,” says Rab to a rapidly recovering Churchill in August. The Prime Minister replies: “I don’t think of you at all, Rab.”

Alex Jennings plays Churchill’s designated successor, Anthony Eden. The PM held Eden a friend, but privately thought he would fail at the job (and was proved right, after Suez in 1956). Fresh from an operation, Eden arrives at Chartwell, expecting to be told the boss will soon hand over. Churchill disappoints him: “My dear Anthony, we’ve been very concerned about you.”

If anything, the portrayal of the Churchill children, boozing and bickering (correctly with the exception of Mary), is over-emphasized. No one alive knows what really happened at Chartwell in those anxious weeks, but family and staff I talked to over the years never mentioned rows in those fraught weeks. In the film, Diana and Sarah are petrified of the old man; Randolph is diffident, sitting in silent reflection at his father’s bedside. But he quarrels with his sisters, and his mother tells him to go. Randolph roars off, not omitting to say: “Tell Papa I love him.” The film thus manages to represent how the three elder children must have felt, and certainly acted, at one time or another. They had grown up under a great shadow, in trying times. As Moran (perhaps wise before the fact) is made to remark: “There’s a price to pay for greatness, but the great seldom pay it themselves.”

What Good’s a Constitution?

The producers could have spent less time on the angst of Churchill’s progeny, and more on how Colville and Soames held the fort (symbolic of a larger staff, which included David Pitblado, Anthony Bevir, and personal secretary Anthony Montague Browne).3 Churchill wrote a famous article, “What Good’s a Constitution?” In 1953, they must have asked themselves that question.

Today it would be impossible to keep a lid on such a secret. What they did might indeed be thought unconstitutional. Yet the nation owed a debt to those responsible lieutenants, who acted only when they knew the PM would approve. As Colville remembered:

…the administration continued to function as if he were in full control. We realised that however well we knew his policy and the way his thoughts were likely to move, we had to be careful not to allow our own judgment to be given Prime Ministerial effect. To have done so, as we could without too great difficulty, would have been a constitutional outrage. It was an extraordinary, indeed perhaps an unprecedented, situation….

Christopher Soames…now held the place in Churchill’s heart so long reserved for Randolph who had been incapable of filling it….It seemed to me that, whatever the rules might be, Christopher should be given access to many papers he was not supposed to see, including Cabinet papers. In the event the shrewdness of his comments, combined with his ability to differentiate between what mattered and what did not, was of invaluable help in difficult days. Before the end of July the Prime Minister was sufficiently restored to take an intelligent interest in affairs of state and express his own decisive views. Christopher and I then returned to the fringes of power, having for a time been drawn perilously close to the centre.4

While the testimony of insiders certainly suggests a close call, many were remarkably confident that Churchill would recover. The morning after the stroke, wrote Mary Soames, he “amazingly presided at a Cabinet meeting, where none of his colleagues thought anything was amiss.” She quoted Harold Macmillan: “I certainly noticed nothing beyond the fact that he was very white. He spoke little, but quite distinctly.” But by the time he arrived at Chartwell on the 25th, he was at rock bottom. Mary continued:

Winston’s condition deteriorated: Lord Moran thought he might well not live through the weekend. However, in a day or two he was visibly better, and his recovery proceeded (although somewhat spasmodically), to the relief and amazement of the close circle who knew the truth….On 24 July he was well enough to be driven the three-hour journey to Chequers; and he started attending to political and literary work. Eight weeks after his stroke Churchill presided at a Cabinet meeting in London on 18 August; but his progress was uneven, and he suffered fatigue and bouts of depression.…5

Churchill’s Secret is replete with Sir Winston’s famous admonition in the face of misfortune, K.B.O. (Keep Buggering On). Amid growing calls for his retirement, he was determined to stay—long enough at least for one more try at his final goal: a permanent peace. The film is not clear about how much time elapsed between the stroke and the “test” Churchill set for himself. That was the Conservative Party Conference at Margate, where on October 10th he would have to make a major, fifty-minute speech. It was do or die: We are rushed through the weeks to Margate, actually almost four months after he was stricken.

Of course he brought the house down, as Jock Colville noted: “He had been nervous of the ordeal: his first public appearance since his stroke and a fifty-minute speech at that; but personally I had no fears as he always rises to occasions. In the event one could see but little difference, as far as his oratory went, since before his illness.”6

Some keen observers have faulted the portrayal Clementine in Churchill’s Secret—not for Lindsay Duncan’s skillful acting, but for the words the script has her say. To some she seems a whiny, self-centered neurotic, the very picture given in recent biography.

I honestly didn’t have that impression. At Margate Clementine tells him firmly: “See them off, Winston.” His daughter told me she had thought in June that his life was ending. The film suggests that Lady Churchill had many regrets. In fact she did genuinely feel—and had for a long time—that he had stayed too long. “Clementine bore the brunt of all this,” Mary wrote, “and her anxiety concerning his political intentions was great. She also had the misfortune at this time to fall and crack some ribs—not serious, but very painful.”7

On balance the film establishes a reasonably accurate picture of Lady Churchill. “None of us would be here without him,” one of his children says, “And he wouldn’t be here without you.” Winston himself tells her: “I shall face anything with you—the Russians, the Tories, even death itself.” Unlike certain frothy popular accounts, Churchill’s Secret makes it clear that come what may, Clementine was the rock on which he depended. As he said of her on many occasions: “Here firm, though all be drifting.”