Lincoln and Churchill – Part I: Preparation for Greatness 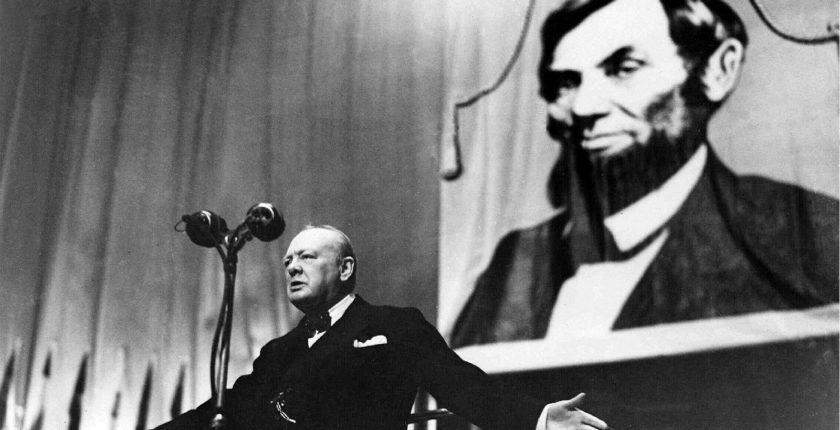 President Lincoln and Prime Minister Churchill found themselves challenged by wars of national survival. Even though their early lives appear to be different, there are similar aspects in their educational preparation.

“If a man will stand up and assert, and repeat and re-assert, that two and two do not make four, I know nothing in the power of argument that can stop him,” declared Abraham Lincoln at Peoria on 16 October 1854. In this case, he implied that Senator Stephen Douglas, his political adversary, made irrational arguments on the subject of slavery.

Young Lincoln never had much of a chance to study mathematics. In June 1860, Lincoln wrote to a journalist that “when I came of age I did not know much. Still somehow, I could read, write, and cipher to the Rule of Three; but that was all. I have not been to school since. The little advance I now have upon this store of education, I have picked up from time to time under the pressure of necessity.”

Mr. Churchill would echo these biographical remarks of Mr. Lincoln in his speech at the Massachusetts Institute of Technology on 31 March 1949: “I frankly confess that I feel somewhat overawed in addressing this vast scientific and learned audience.…I have no technical and no university education, and have just had to pick up a few things as I went along.”

Lincoln scholar M.L. Houser noted that “Lincoln’s campaign autobiographies in 1859-60 were replete with such expressions as…‘literally without education,’ ‘absolutely nothing to excite ambition for education,’ ‘never inside an academy or college,’ ‘did not know much,’ ‘little advance,’ ‘that was all,’ ‘regrets his want of education’ and ‘rather thought he could not succeed at [law] without a better education.’”1

Again, at age 71, Mr. Churchill would remind us of Mr. Lincoln’s own sentiments on his formal education. Churchill, upon receiving an honorary degree from the University of Miami on 26 February 1946 said: “I am surprised that in my later life I should have become so experienced in taking degrees, when, as a schoolboy I was so bad at passing examinations. In fact one might almost say that no one ever passed so few examinations and received so many degrees.”

Lincoln’s observations about his education undervalued the immense effort he had put into self-improvement. At 23, Lincoln had stated in his first political campaign that education is “the most important subject which we as people can be engaged in.” He took his own advice. Lincoln scholar Paul M. Angle wrote that “where most men in his circumstances would have been content with this meager preparation, Lincoln was not. [At 23] he was hard at work, under the supervision of the village schoolmaster of New Salem, at the study of grammar. A year later he was deep in trigonometry and surveying, and soon afterwards he read Blackstone, Chitty, Kent and other legal classics.”2

As an adult, Lincoln continued his studies, writing in 1860 that he “nearly mastered the six books of Euclid since he was a member of Congress [1846-1848]. He regrets his want of education, and does what he can to supply the want.” By the time Lincoln set his mind to Euclid, he was over forty years of age—although he probably had begun his study several years earlier. At forty-five, he had mastered Euclid.

Lincoln’s decade-long study of geometry took place late at night while traveling the Eighth Judicial Circuit in Illinois, staying in frontier rooming houses. “Placing a candle on a chair at the head of the bed, he would read and study for hours” while fellow lawyers “filled the air with our interminable snoring,” recalled his law partner. “[I]n this way he studied Euclid until he could with ease demonstrate all the propositions in the six books.” A fellow lawyer observed that Lincoln “wanted something solid to rest upon, hence his bias for mathematics and physical sciences.”3

Similarly, Winston Churchill, in his autobiographical My Early Life, would reflect upon those historians, upon whose work he would rest his vocation as an historian: “I affected a combination of the styles of Macaulay and Gibbon, the staccato antitheses of the former and the rolling sentences and genitival endings of the latter; and I stuck in a bit of my own from time to time.”

For Lincoln, the study of Euclid’s logical method was indispensable to the development of rational discourse. Thus, he could build the case for political and economic policies based on facts and logic. Euclid’s influence was evident in both Lincoln’s private writings and in his public speeches. According to scholar Paul Angle: “In the severe logic of his later addresses, and even in occasional phrases such as the ‘dedicated to the proposition’ of the Gettysburg address, one finds the result of his Euclidean reasoning.”4

In April 1859 Lincoln would apply Euclidean logic to the “equality” clause of the Declaration of Independence, writing: “It is now no child’s play to save the principles of Jefferson from total overthrow in this nation. One would start with great confidence that he could convince any sane child that the simpler propositions of Euclid are true; but, nevertheless, he would fail, utterly, with one who should deny the definitions and axioms. The principles of [Thomas] Jefferson [in the Declaration of Independence] are the definitions and axioms of free society. And yet they are denied, and evaded, with no small show of success” by the proponents of slavery’s extension.

“There are two ways of establishing a proposition,” said Lincoln a few months later at Columbus, Ohio. “One is by trying to demonstrate it upon reason, and the other is, to show that great men in former times have thought so and so, and thus to pass it by the weight of pure authority. Now, if Judge [Stephen A.] Douglas will demonstrate somehow that this is popular sovereignty, the right of one man to make a slave of another, without any right in that other, or anyone else to object, demonstrate it as Euclid demonstrated propositions, there is no objection. But when he comes forward, seeking to carry a principle by bringing to it the authority of men who themselves utterly repudiate that principle, I ask that he shall not be permitted to do it.”

Lincoln’s World War II counterpart, Winston Churchill, was not a friend of mathematics, the lack of mastery of which almost barred the 18-year-old from admission to the Royal Military College, Sandhurst. Churchill’s academic performance in school had been uneven. He did very well in English and history, but not in Latin, Greek, or math. “For years I thought my father, with his experience and flair, had discerned in me the qualities of military genius,” recalled Churchill. “But I was told later that he had only come to the conclusion that I was not clever enough to go to the Bar.” Indeed, young Churchill’s initial failures to pass the Sandhurst exam infuriated his cold and imperious father. In his seventeenth year, Churchill required intensive tutoring and three tries to pass the Sandhurst examination in 1892. In his first attempt, Churchill had done poorly in mathematics. He attributed his great improvement in the second exam to a Harrow tutor who “convinced me that Mathematics was not a hopeless bog of nonsense, and that there were meanings and rhythms behind the comical hieroglyphics; and that I was not incapable of catching glimpses of some of these.”

Geometry was a difficult subject for Churchill. In his memoir, My Early Life, Churchill wrote of his geometrical passage through “a strange corridor of things…called Sines, Cosines and Tangents. Apparently they were very important, especially when multiplied by each other, or by themselves! They had also this merit — you could learn many of their evolutions…by heart. There was a question in my third and last Examination about these Cosines and Tangents in a highly square-rooted condition which must have been decisive upon the whole of my after life. It was a problem. But luckily I had seen its ugly face only a few days before and recognised it at first sight.” Churchill’s memory was prodigious.

“I have never met any of these creatures since,” Churchill remembered. “With my third and successful examination they passed away like the phantasmagoria of a fevered dream. I am assured that they are most helpful in engineering, astronomy and things like that.” Churchill did become the master of military statistics as Britain’s wartime prime minister. He organized his war ministry and his decisions based on science and fact to the extent possible. Like Lincoln, he came out the victor.

For Lincoln and Churchill, respect for the facts of mathematics, science, and war proved almost as important as the mastery of men as commander-in-chief.

Further reading: Lincoln & Churchill, a project of the Lehrman Institute