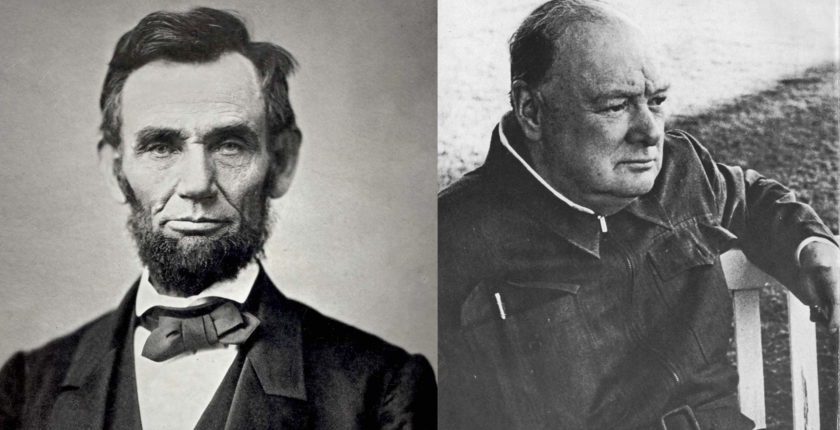 “‘Shoot if you must this old grey head / But spare your country’s flag,’ she said.” In Frederick, Maryland, as President Roosevelt recited the two most famous lines in Whittier’s “Barbara Freitchie,” the voice of his companion rumbled: “Up from the meadows rich with corn / Clear on the cool September morn….” It was Churchill, reciting the poem from end to end. Lincoln and Churchill held a shared magnanimity toward conquered foes, a philosophy Whittier reflected: “Honor to her! and let a tear / Fall, for her sake, on Stonewall’s bier.”

“We cannot escape history,” President Lincoln declared in his Second Annual Message to Congress in December 1862. “We of this Congress and this administration, will be remembered in spite of ourselves. No personal significance, or insignificance, can spare one or another of us. The fiery trial through which we pass will light us down, in honor or dishonor, to the latest generation.”

Lincoln was aware that historians could misrepresent the facts. His contemporaries testified that he “had no faith” in history or biography.1 But he understood that his decisions could change the course of human events. “If my name ever goes into history, it will be for this act,” said President Lincoln as he signed the Emancipation Proclamation on 1 January 1863. Churchill himself would comment: “Everyone can recognize history after it has happened; but it is only the wise person who knows at the moment what is vital and permanent, what is lasting and memorable.”2

A long-time friend of Lincoln’s, Joshua F. Speed, himself a Kentucky slaveowner, differed from Lincoln on slavery. Once in the White House, they discussed the Emancipation Proclamation. Lincoln talked about a period in early 1841 when he had been much depressed after a breakup with his future wife Mary Todd. Lincoln reminded Speed that he had told him that he had done nothing to make any human being remember that he had lived. Lincoln recalled that conversation and told Speed: “I believe that in this measure [meaning his Proclamation] my fondest hopes will be realized.”

When World War II broke out in Europe, Winston Churchill was at work on his History of the English-Speaking Peoples. He had completed the multi-volume work through the American Civil War, but his publisher wanted Churchill to complete the series to the 20th century. World War II intervened. And thus Churchill had the opportunity to craft his own pivotal role in English-speaking history with his six-volume memoir, The Second World War.

For decades, Churchill had studied and written historical works. During the 1930s when Churchill was out of office, “in the wilderness,” his primary occupation and source of income was writing. Abraham Lincoln also studied history during the 1850s when he was out of office—primarily to draft well-researched speeches opposing the extension of slavery.

Churchill, gifted historian that he was, learned lessons from the history he wrote. He certainly understood the importance of patience and hard work from writing his four-volume biography of John Churchill, First Duke of Marlborough. “The real reason why I succeeded in my own campaigns is because I was always on the spot—I saw everything, and did everything for myself,” the Duke had observed.

In March 1932, while visiting America, Winston Churchill gave a speech on Anglo-American relations at the Westchester County Center, just a few months after he had been seriously injured in a Manhattan auto accident. “Words are the only things that last forever,” Churchill told his White Plains audience. “The most tremendous monuments or prodigies of engineering crumble under the hand of Time….But words spoken two or three thousand years ago remain with us now, not as mere relics of the past, but….leaping across the gulf of ages—they light the world for us today.”

During his “wilderness years” out of high office during the 1930s, Churchill wrote a British official that “you assume the future is a mere extension of the past whereas I find history full of unexpected turns and retrogressions.”3 A turn of fate in May 1940 would elevate Churchill to Prime Minister of the United Kingdom—a job he performed both as a war statesman and a keen historian. A World War II contemporary observed that Churchill “looks back on the story of Great Britain and the English-speaking races with the eye of an historian, he looks forward to its future with the eye of a prophet and a statesman. He has seen that his part in it is recorded. No one will deny him his glory.”4

“Past experience carries with its advantages the drawback that things never happen the same way again,” wrote Churchill in his memoirs. “Otherwise I suppose life would be too easy.”5 Few things enchanted Churchill so much as discussing great men of history. In 1942, British Admiral Andrew Cunningham reported “a lunch at Ten Downing Street with two American Generals, and the Prime Minister being full of new ideas for confounding our enemies. The conversation switched to the battles of the American Civil War, about which Mr. Churchill’s knowledge was amazing. I confided to my relative that I thought him ‘an extraordinary man.’”6  Churchill, whose mother was American, cherished his mastery of American history.

In 1943, Churchill went with President Franklin D. Roosevelt to the presidential retreat in the hills of Maryland. As the Anglo-American leaders passed through Frederick, FDR told Churchill the Civil War story of Union patriot, Barbara Freitchie. Then FDR recited a few lines from John Greenleaf Whittier’s poem about her. Churchill responded by reciting the entire Freitchie poem from memory to the astonished American President.

Lincoln’s memory was as good as Churchill’s, but Lincoln’s opportunity to study British history had been very limited. In February 1865, President Lincoln attended a peace conference in Virginia. After Lincoln set stiff Union conditions for any negotiations, one of the Confederate commissioners argued, as a precedent, that King Charles I had reached agreements with rebels during an English Civil War. “I do not profess to be posted in history,” said Lincoln in concluding the discussion. “All I distinctly recollect about the case of Charles I is that he lost his head in the end.”

When it came to the future judgments of history, Winston Churchill had an advantage over Lincoln. “History will be kind to me for I intend to write it,” the British Prime Minister told World War II associates. Abraham Lincoln, however, had his own advantage. More even than Churchill, perhaps, Lincoln was attuned to the realities of the present and the promises of the future. In his 1862 Message to Congress, Lincoln revealed in a single line his ability to adapt to whatever came: “As our case is new, so we must think anew and act anew.”

Further reading:
Lincoln and Churchill – Part I: Preparation for Greatness
Lincoln & Churchill, a project of the Lehrman Institute.

6 Andrew Browne Cunningham, A Sailor’s Odyssey: The Autobiography of Admiral of the Fleet Viscount Cunningham of Hyndhope (New York: Dutton, 1951), 476.