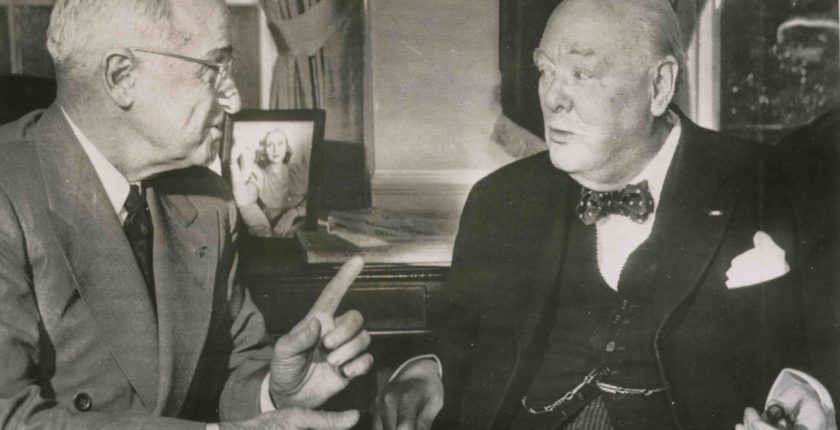 …wears many hats, including that of American technology executive and founder of the National Museum of the U.S. Army. He is a prize-winning author on military and political history. In his latest book, Leebaert vigorously reexamines the historiography of the Anglo-American “Special Relationship,” with emphasis on its early years. The critical alliance created by Roosevelt and Churchill enabled the defeat of the Axis in World War II. After the war, it served to combat communism, and later to battle rogue states and terrorism.

The “Special Relationship” and its critics

The consensus view of the Anglo-American “Special Relationship” is of a democratic bulwark during the latter 20th century. Early on, Great Britain faded from the status of equal ally into one of junior partner. In the 1990s, however, the conservative British historian John Charmley provocatively challenged this understanding. His books, Churchill: The End of Glory and Churchill’s Grand Alliance, focused on the years 1940-57.

With impeccable research and biting wit, Charmley portrayed the alliance as one sided piece of Churchillian appeasement. Largely under Churchill, he wrote, the British Empire was transformed into an American client state. Churchill remains popular in the United States, Charmley argued, because he continually sold out to American not British interests. Anthony Eden, Churchill’s successor (1955-57) briefly tried to reverse this process. But the Suez War with Egypt contributed to his resignation and cowed Britain into becoming America’s Poodle. 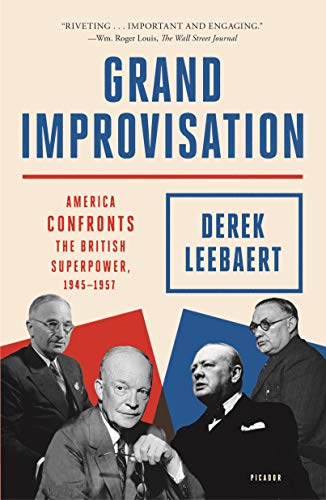 Leebaert offers a different approach from Charmley. He surmises that the United States did not assume global preeminence during the war, nor immediately afterward. Rather, it was a slow process that took more than a decade to complete. In 1945, the U.S had no grand strategy for world leadership, says Leebaert. Indeed, he describes American foreign policy in the first postwar decade as one of “desperate improvisation.”

The special understanding that looms so large in British and American mindsets is, Leebaert argues, less than it seems. Franklin Roosevelt was critical of both the British Empire and Soviet communism. He wanted greater political freedom for the people in both systems—and access to their trading markets. Presidents Truman and Eisenhower were equally interested in pulling down the trade barriers, especially with former British colonies. India and Pakistan loomed large in their hopes to expand American trade.

In the Truman Administration (1945-53) America dealt primarily with Churchill’s Labour Party successors. Prime Minister Clement Attlee and his redoubtable Foreign Secretary Ernest Bevin were not ready to cede world leadership. Rather, Leebaert says, they sought to rebuild the British economy and to maintain Britain’s world power status. But Attlee and Bevin faced worldwide political changes including the de-colonization of India and Pakistan. Challenges to their interests occurred in Egypt and in Iran, Britain’s major oil supplier. They wanted good relations with the United States, and resistance to the expansionist Soviet Union.

In the 1940s American and Britain jointly confronted the Soviets. They maintained the Berlin Airlift when Stalin tried to close that city to his former allies. They formed the North Atlantic Treaty Organization (NATO) to defend Europe. Even though he was no longer in office, Churchill spoke out to encourage U.S involvement in Europe.  An example was his 1946 “Iron Curtain” speech, given while Britain sought to remain dominant in the Middle East. The U.S was also heavily involved in Asia, and the sole occupying power in postwar Japan. After China fell to the communists in 1949 America, aided by Britain and the Commonwealth, fought the Korean War.

Leebaert posits the United Kingdom as both a “warfare state” and a “welfare state.” Its postwar economy was taxed by social reconstruction at home and a large military presence abroad. While supporting security in Europe, the British were also actively battling communists, in alliance in Korea and on their own in Malaya. This was done in addition to dealing with continuing unrest in Egypt and Iran.

Churchill returned as Prime Minister in late 1951, joined by his heir apparent Anthony Eden, who again served as foreign minister. They continued the Attlee-Bevin policy of engaging the Americans while asserting Britain’s independence. Cooperation was quickly demonstrated by a joint Anglo-American coup in Iran. That installed a government more friendly towards Western interests, which lasted until the Iranian revolution of 1979. Churchill and Eden also presided over the explosion of Britain’s first atomic bomb in 1952. This elevated the UK’s global status,  joining the United States and Soviet Union as nuclear powers.

While they supported the war effort in Korea, Churchill and Eden diverged with Eisenhower over backing the French in Vietnam. Churchill was adamant that under no circumstances would Britain join any intervention there. This, Leebaert suggests, resulted in France being forced to negotiate peace in 1954. In return, the United States did not support British influence in Egypt. Nor did Eisenhower respond to Churchill’s repeated attempts to restart summit meetings with Russia.

Here Leebaert differs sharply with his predecessor. Contrary to Charmley, he shows that Churchill was often at odds with Truman, and was even more with Eisenhower. The Americans respected Churchill for his war leadership, but increasingly viewed the aging warrior as tiresome and out of touch.

There was some relief when Sir Winston finally retired in 1955, but this was short lived. Eden, who began his tenure with great prospects, was not a well man. He was quickly undone after Egypt nationalized the Suez Canal in 1956. In response, the erratic Eden entered into what Leebaert views as a cynical alliance with France and Israel. They launched an ill-judged war with Egypt, ostensibly to protect the canal but instead leaving it damaged. Moreover, they failed to get the Americans on board. Subject to worldwide criticism and economic collapse, Eden was forced to suspend military operations and later to resign as premier. He was replaced by Harold Macmillan, who successfully rebuilt relations with the United States and successfully managed Britain’s transition to a less global and more economically viable secondary power.

Leebaert convincingly makes the case that neither Churchill nor Attlee conceded American world leadership. Churchill had said of a World War II general: “I sent him a signal—’Improvise and dare’.… He improvose and dore.” The same might be said about American postwar policy. The improvisational phase begun under Truman only ended after Eden’s missteps in Egypt. Suez caused Eisenhower, in effect, declare final independence from UK initiatives in December 1956. From that point—but only from then—the United States assumed its leading power status.

Derek Leebaert offers an impressively written text, well supported with extensive endnotes, maps, and photographs, but oddly no bibliography. It will be read with interest by anyone interested in the “Special Relationship.” It is also effective counter-argument to the works of Professor Charmley.

Mr. Shepherd is the University Archivist and Head of Special Collections at The Catholic University of America in Washington, D.C. He is also creator, editor, and a writer for The Archivist’s Nook.