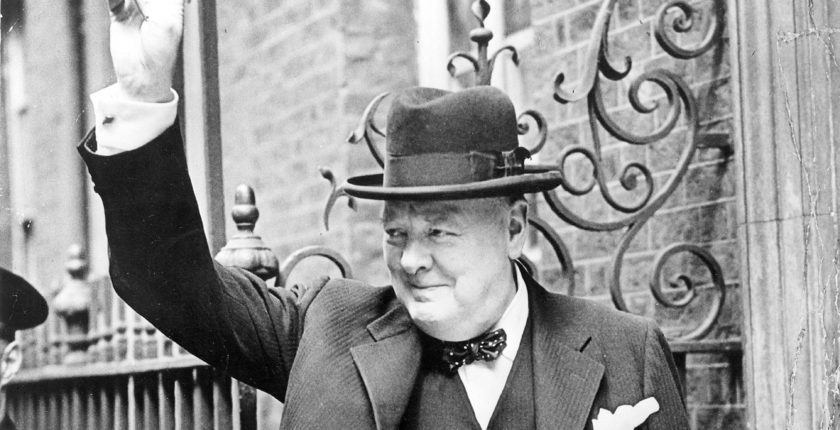 This department normally reviews recent titles, consigning pre-2010 works to our Annotated Bibliography. Occasionally, however, an earlier work is so outstanding that we wish to bring it to readers’ attention.

Fiona Reynoldson’s Winston Churchill, for ages 8-15 in the American Heinemann Library’s “Leading Lives” series, is far and away the best juvenile ever published, anywhere, by anybody. It is part of a series that mixes Stalin, Hitler, Mussolini and Arafat with Roosevelt, Kennedy and Gandhi. I don’t know anything about the other titles but Reynoldson’s Churchill is a masterpiece.

One wouldn’t expect so much wisdom to be so attractively wedged into sixty-four pages: a quality sewn binding with a durable laminated photographic cover; color throughout, including some excellent photographs, cartoons, and posters. Churchill is discussed in twenty brief chapters, including the summary, “Churchill’s Legacy.” There is an events timeline, a list of key people from Churchill’s time, a page showing how British government works, sources for further research, a glossary and an index.

The glossary is one of this book’s great features. Every time a word or phrase pops up that might be unfamiliar to young eyes—Nobel Prize, allies, Boer, abdicate, Home Secretary, Nazi, VC, Bolshevik, DSO, peer, civil war, Gold Standard, Home Rule, etc.—it is bold faced and referenced in a three-page glossary. This is not haphazard: there are over sixty entries, and every explanation is simple and accurate. This is a fine technique and it is a wonder why books beyond a child’s reading level don’t employ it.

Reynoldson, who has written over sixty history and information books for young people, shares with Churchill and his official biographer a demand for good maps. All these are high quality—not too detailed but perfect for readers this age—and sprinkled at key junctures throughout. But the very best aspect of her work is the collection of little sidebars that pace the story. These gems are carefully placed, written in precise English, and explain exactly what Churchill did, how he felt about it, and why it matters. And she is never wrong.

Take his speech impediment, something almost always misrepresented as a stutter by haphazard writers. Reynoldson’s sidebar reads: “Churchill came home on leave in 1897 and went to see a doctor in London about his lisp. He pronounced ‘s’ as ‘sh.’ Nothing was found to be wrong, but the lisp never went away. Despite this, he made his first political speech during his leave and later became a great orator [glossary word] in the House of Commons.” Perfect.

Some sidebars deliver profound facts about Churchill’s character that are rarely found even in adult biographies. Take page 48, excerpted from Winston’s letter to Clementine in February 1945: “…my heart is saddened by the tales of the masses of German women and children flying along the roads…before the advancing armies…. The misery of the whole world appalls me, and I fear increasingly that new struggles may arise out of those we are successfully ending.” How much more satisfying and true is this little insight than the popular slander about how Churchill instituted and even enjoyed the fire bombing of civilians?

Throughout, the author delivers unadulterated, factual information. As with any good journalist, you have no idea how she feels personally about her subject. She deals in facts: entertainingly, even eloquently. I could find only one mistake: she says Churchill won the Nobel Prize for The Second World War. (It was presented for his writing as a whole, at a time when his war memoir was still incomplete.)

Whatever the age of one’s audience, writing a compact book on a complicated subject is hard work. You must know what to highlight, what to jettison, what to gloss over. To choose the right subjects, to represent them deftly, is a great achievement. Fiona Reynoldson’s young readers will over time develop their own perceptions of Winston Churchill—thoroughly grounded in the education she has provided them. We should all buy five copies of this book and get them into the hands of schools, libraries and young people of promise.