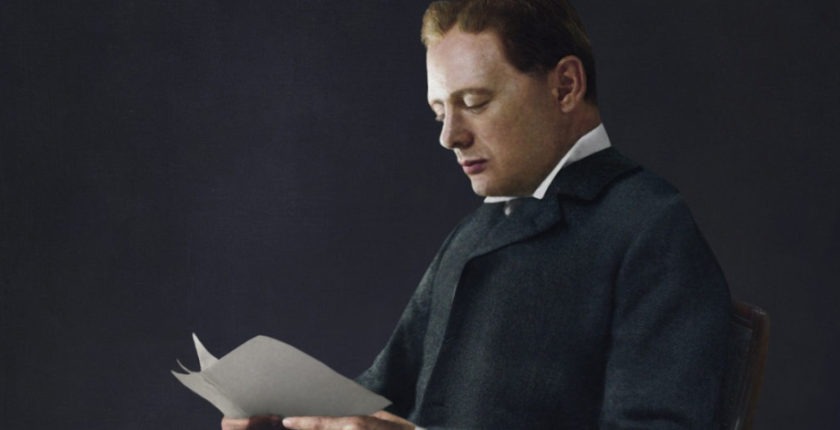 From his earliest years through his eighties, Churchill read voraciously. His self-learning was forged by reading the great books, just as Hillsdale students do today. And his reading list is evergreen. (Illustration from the electronic edition of the Official Biography, Vol. 1, published by Hillsdale College and RosettaBooks)

“The result of one kind of learning is valued by what you know. Of the other by what you are. The latter is far more important but it is useless in the total absence of the former. A judicious proportion should be observed. How many people forget this! The education of the schoolboy and of nearly all undergraduates aims only at stocking the mind with facts. I have no ambition to ‘stifle my spark of intelligence under the weight of literary fuel’ but I appreciate the power of facts. Hence my toil….” —WSC to his mother, Bangalore, India, 31 March 1897, in Winston S. Churchill, vol. 1, Youth 1874-1900 (Hillsdale College Press, 2006).

It’s no coincidence that Winston Churchill, perhaps the greatest statesman in living memory, was remarkably well-versed in history and classic literature. His own writing earned a Nobel Prize, much of it on history and the philosophy of government. Churchill had a profound grasp of human knowledge, learning and behavior, transcending both time and culture. Thus he distilled and expressed the essence of complex issues, making them approachable and politically effective.

Churchill famously remarked that “the inherent vice of capitalism is the unequal sharing of blessings; the inherent virtue of socialism is the equal sharing of miseries.” Such succinct comprehension is as apt today as it was in his time. Remarks like this show why so much of his wisdom remains with us today. Equally, of course, his legendary foresight allowed him to recognize the significance of events, like the rise of Hitler, well before most others.

Despite attending a famous preparatory school and the Royal Military College, Churchill felt himself poorly prepared for political leadership. To remedy this he undertook, on his own, intensive learning of the classics. He supplemented this by painstakingly analyzing  two decades of Parliamentary proceedings in the Annual Register. On 31 March 1897 he wrote his mother:

The method I pursue with the Annual Register is [not] to read the debate until I have recorded my own opinion on the paper of the subject—having regard only to general principle. After reading I reconsider and finally write. I hope by persevering continuance of this practice to build of a scaffolding of logical and consistent views which will perhaps tend to the creation of a logical and consistent mind.

Of course the Annual Register is valuable only for its facts. A good knowledge of these would arm me with a sharp sword. Macaulay, Gibbon, Plato etc. must train the muscles to wield that sword to the greatest effect. This is indeed a nice subdivision of the term “education”. The result of one kind of learning is valued by what you know. Of the other by what you are….

Churchill understood that although learning facts is important, it is less important than learning how to interpret and act upon them. Wisdom, he found, comes only from experience and a properly prepared mind. Aided by his self-education, he began his own political career at age twenty-six. By then he had a world view as subtle and sophisticated as politicians twice his age. His oratory was inspired by “The Scaffolding of Rhetoric,” an essay he never published, but clearly adhered to religiously.

For the next fifty years Churchill applied his growing wisdom to the most difficult problems of his day. His apogee, of course, was the Second World War. More than anyone else, he provided the vision that spurred the Allies on to victory. Churchill didn’t win every political battle. But he always understood why conflict existed, and what was at stake.

My own early schooling left me with a mind well prepared for medicine. But the study of the sciences was no substitute for a learning of human nature and governance, which the study of the classics could provide. They are also part of the Hillsdale College curriculum: philosophy, history and politics.

My own Churchillian learning began after watching The Wilderness Years, starring Robert Hardy. This was a very high quality 1981 British mini-series about Churchill’s life in the 1930s. From there I went on to read Churchill’s own books. Fortunately, Churchill left us accounts of his unique and valuable self-education. Inspired by his autobiography, I then went on to the classics that Churchill himself read. Among his readings I benefited most from the following. For a more complete list see My Early Life, Chapter IX, “Education at Bangalore.”

Winston S. Churchill, A History of the English-Speaking Peoples: To understand the development of government of the people, by the people and for the people.

The following is a representative sample of the still-apposite works Winston Churchill absorbed and constantly referred to, which in the author’s case emphasize understanding the American experience:

Alexis de Tocqueville Democracy in America: To understand what it means to be an American.

Edward Gibbon, The Decline and Fall of the Roman Empire: For an account of ancient history that showcases human motivation and behavior over the centuries.

Friedrich A. Hayek, The Road to Serfdom: To understand Socialism.

John Locke, Second Treatise on Government: To understand the political philosophy of the American founding.

Plato, The Republic, translated with an Interpretive Essay by Allan Boom: To understand human nature, general political philosophy and the weaknesses of democracy.

Adam Smith, An Inquiry into the Nature and Causes of the Wealth of Nations: To understand the free market economy and capitalism.

Dr. Goldfien is a retired anesthesiologist who resides in San Francisco. This article is adapted from an essay which first appeared in The American Thinker.