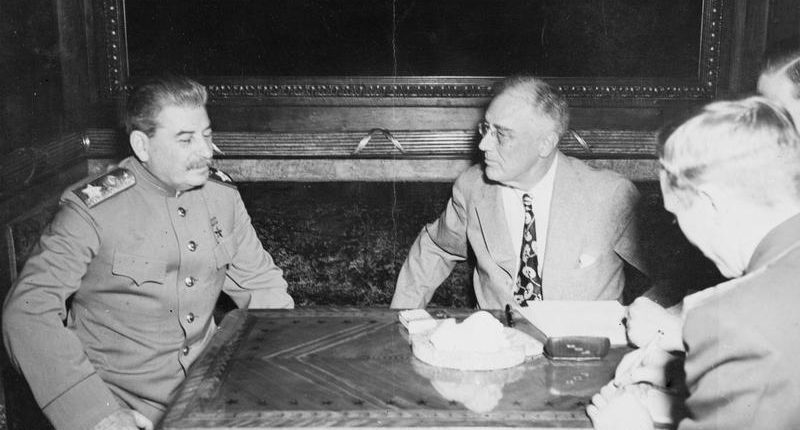 *“The three most unlikely musketeers” is the phrase of David Reynolds, The Kremlin Letters, p. 1. The documents are based on those published in Russian in a three-volume collection edited and commented on by Vladimir Pechatnov.

N.B. The author wishes to state that authors Reynolds and Pechatnov dedicate their book to him and to the late Oleg Rzeshevsky, a Russian historian.

the Soviet government published a surprising set of documents, now cited routinely by historians as “Stalin’s Correspondence.” [1]  Officials at the U.S. State Department were immediately suspicious. Bill (William F.) Franklin, later The Historian at State (and a graduate professor of mine), put together a painstaking report. He was certain he would find omissions, distortions, even fake messages. Instead he found that all the messages in the U.S. files were included.

Multiple translations back and forth were the cause of minor (though occasionally confusing) differences in wording. In a Churchill letter to Stalin in October 1943, “diversion” was mis-transliterated as diversiya, Russian for “subversion” or “sabotage.” As Reynolds and Pechatnov wisely point out in this volume, there is no “‘definitive’ text of a message.” Texts may have been translated and re-translated, as well as being enciphered and deciphered, two or three times. (Stalin’s messages are printed as President Roosevelt and Prime Minister Churchill saw them. So if it’s all there, why another collection?) 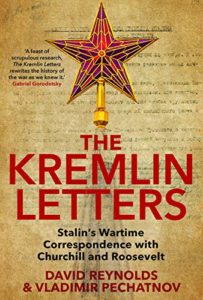 Winston Churchill selected, with great care, many of his exchanges with Roosevelt and Stalin for his memoir, The Second World War. The U.S. State Department did likewise in the many volumes of the Foreign Relations series. [2] Eventually, in 1972-73, came nearly full disclosure of all British and American records for the war years. (Some intelligence and technical or weapons information remained closed.)

British and American records of Big Three exchanges contain documentation showing how they were interpreted in London and Washington. Not so for Soviet publications. Historians had to guess at Stalin’s reactions. Memoirs of Soviet officials (Molotov, Maisky, et al.) and a few Red Army generals helped, but were not definitive. Other publications of correspondence, and histories, suffered from lack of access to Soviet era archives.

For example: how did Stalin react to President Roosevelt’s vague and conditional promise to open a Second Front in 1942? For decades many assumed it raised Stalin’s suspicions about the reliability of his new allies. Perhaps this was the true start of the Cold War? But in 1996, in the aftermath of glasnost and perestroika, Russian historian Oleg Rzheshevsky published War and Diplomacy. This collection of documents proved definitive. We non-Russian-speaking historians learned that from the outset, both Molotov and Stalin dismissed FDR’s “promise” as grandstanding.

It took time for historians to dig through the Soviet era archives, but dig they did. More bits and pieces from Soviet files began to appear in Russian. Translation into English took time, but it soon became clear: Our understanding of Big Three diplomacy and relations could not be understood without the view from the Kremlin.

Now we have it for all of the Big Three. We have it with a narrative that provides historical context while pointing readers to new perspectives in the record. The messages themselves are the same. But now there’s an archival record of what Stalin thought about what Churchill and Roosevelt were telling him.

The Kremlin Letters contains 75 percent of the exchanges. The rest are lengthy lists of supplies, birthday greetings, and the like; those will be available on a digital edition. This is not a dry-as-dust trek through boring documents. David Reynolds, a Cambridge scholar with a remarkable list of books and articles about the Second World War (including In Command of History: Churchill Fighting and Writing the Second World War), has written an accompanying narrative that is, in itself, a major re-examination of the politics of the war. We can, and should, read it like a book.

The Introduction shows us a Stalin different from the stereotypical image of a brutal, paranoid, murdering dictator. He surely was all of the above. He was also remarkably sensitive to words, and shrewd in his political judgments. Reynolds and Pechatnov document that, like Churchill and Roosevelt, he massaged his messages. In the editors’ phrasing, it was a “largely an epistolary relationship.” (p. 3)

The documents show that from June 1941 to mid-November 1942 (with the Russian victory at Stalingrad), Stalin’s focus was pointedly on aid. He wanted supply convoys, a second front, anything. Yes, he talked with Churchill about postwar boundaries. But when the British refused to back down on any of these, Stalin told Molotov not to worry. They could deal with that later, he said. He needed the Anglo-Americans, then and after the war.

Reynolds and Pechatnov suggest that Stalin apparently hoped he could extend the original “Grand Alliance” with the Anglo-Americans. It was not that Stalin, a mass murderer, desperately wanted a kind and gentle world. It was that the USSR was literally exhausted. What Stalin wanted was a world that did not directly and imminently threaten his regime.

The most fascinating might-have-been raised by Reynolds and Pechatnov is their record of Stalin’s reactions to the exchanges. The most pregnant document may be September 1943 draft from Stalin to Churchill and Roosevelt. In it, Stalin referred to the forthcoming meeting of foreign ministers in Moscow. He proposed discussing an “agreement which defines long-term political relations between our countries, both during the war and in the postwar period” (p. 308, emphasis added). For unexplained reasons, that message was never sent. What might have been? A more cooperative, less confrontational relationship between the three powers?

Straws in the wind

That search by Stalin for an accommodation is highlighted by his quite Churchillian message of 11 June 1944. This was just five days after the invasion at Normandy. “As is evident, the landing, conceived on a grandiose scale, has succeeded completely,” he wrote. “My colleagues and I cannot but admit that the history of warfare knows no other like undertaking from the point of view of its scale, its vast conception and its masterly execution.”

Stalin noted Napoleon’s ignominious failure to invade Russia, and the “hysterical” Hitler’s inability to invade England. He closed with a flourish: “Only our Allies have succeeded…in forcing the Channel. History will record this deed as an achievement of the highest order” (p. 429). Reynolds and Pechatnov note that it the message was likely drafted by Stalin himself. Yes, it all could have been well-aimed flattery. It could also have been genuinely meant.

This was just one of the “straws in the wind” that augured the possibility of a more cooperative, less frightening postwar relationship between the great powers. Can we imagine Stalin sending Churchill and Roosevelt signed photographs of himself? He did! Why, if not to personalize and grease the relationship?

A longtime story is that the Russians at Teheran lured Roosevelt into staying at the Russian legation. The rooms were bugged, so they could listen in on his discussions. But the Russian documents indicate clearly that they believed Roosevelt asked to stay there. Did they eavesdrop? Of course, as they demonstrably did on Churchill, whenever able. The British and Americans did likewise, given the opportunity. Moreover, both Churchill and Roosevelt assumed that “bugging” was a fact.

By war’s end, Roosevelt was dead, and both Churchill and Stalin were exhausted to the point of physical collapse. Stalin went off to the Black Sea to rest. Churchill had to fight an election that he and his party would lose. But the world was free of Nazi Germany.

Reynolds and Pechatnov add a collection of wonderful photographs. For non-Russian-reading researchers, this book is indispensable. For aficionados of the history of the Second World War, it is a thought-provoking delight.

Dr. Kimball, author of Forged in War, The Juggler, and books on the Morgenthau Plan and the origins of Lend-Lease, edited the three-volume collection of Churchill-Roosevelt correspondence (with commentaries). He has published over fifty essays on Churchill, Roosevelt and the era of the Second World War. Robert Treat Professor (emeritus) at Rutgers University, he was Pitt Professor at the University of Cambridge, 1987-88.  His institutional history, The United States Tennis Association: Raising the Game, was published in December 2017.  He was the Jones Distinguished Professor at Wofford College (Spartanburg, SC) in spring 2019. See also herein his “Churchill and the Presidents: Franklin Roosevelt.”