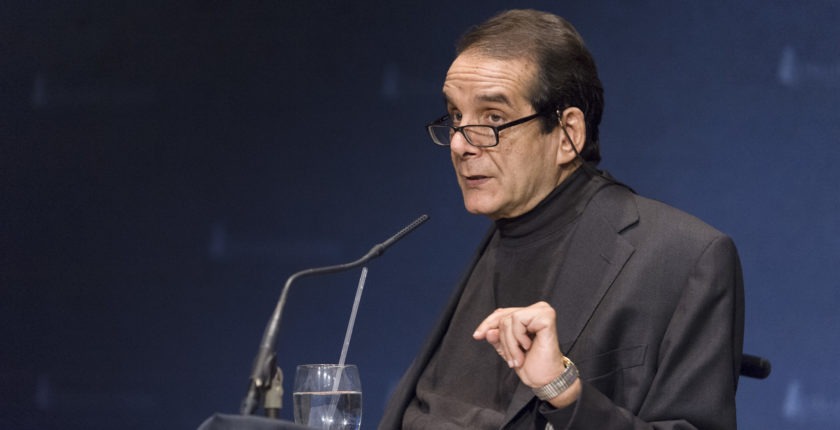 Charles Krauthammer (1950-2018), a close friend of Hillsdale College, had a profound understanding of Winston Churchill. In 2015 he addressed a capacity audience on the subject in his last appearance at our Center for Constructive Alternatives. He wrote this article during the “Person of the Century” debate in late 1999. We publish it in tribute to and admiration of our late colleague, by permission of his wife Robyn and with the kind assistance of Cita Stelzer. If you enjoy this, please watch Dr. Krauthammer’s classic defense of the Constitution on Constitution Day 2011.

It is just a parlor game, but since it only plays once every hundred years, it is hard to resist. Person of the Century. Time magazine offered Albert Einstein, an interesting and solid choice. Unfortunately, it is wrong. The only possible answer is Winston Churchill.

Why? Because only Churchill carries that absolutely required criterion: indispensability. Without Churchill the world today would be unrecognizable—dark, impoverished, tortured.

Without Einstein? Einstein was certainly the best mind of the century. His 1905 trifecta—a total unknown who published three papers (on Brownian motion, the photoelectric effect and the special theory of relativity), each of which revolutionized its field—is probably the single most concentrated display of genius since the invention of the axle. (The wheel was easy; the axle hard.)

Einstein also had a deeply humane and philosophical soul. I would nominate him as most admirable man of the 20th century. But the most important? If Einstein hadn’t lived, the ideas he produced might have been delayed. But they would certainly have arisen without him. Indeed, by the time he’d published his paper on special relativity, Lorentz and Fitzgerald had already described how, at velocities approaching the speed of light, time dilates, length contracts and mass increases.

True, they misunderstood why. It took Einstein to draw the grand implications that constitute the special theory of relativity. But the groundwork was there. And true, his general theory of relativity in 1916 is prodigiously original. But considering the concentration of genius in the physics community of the first half of the 20th century, it is hard to believe that the general theory would not have come in due course, too.

Take away Churchill in 1940, on the other hand, and Britain would have settled with Hitler—or worse. Nazism would have prevailed. Hitler would have achieved what no other tyrant, not even Napoleon, had ever achieved: mastery of Europe. Civilization would have descended into a darkness the likes of which it had never known.

The great movements that underlie history—the development of science, industry, culture, social and political structures—are undeniably powerful, almost determinant. Yet every once in a while, a single person arises without whom everything would be different. Such a man was Churchill. After having single-handedly saved Western civilization from Nazi barbarism—Churchill was, of course, not sufficient in bringing victory, but he was uniquely necessary—he then immediately rose to warn prophetically against its sister barbarism, Soviet communism.

Churchill is now disparaged for not sharing our multicultural modern sensibilities. His disrespect for the suffrage movement, his disdain for Gandhi, his resistance to decolonization are undeniable. But that kind of criticism is akin to dethroning Lincoln as the greatest of 19th century Americans because he shared many of his era’s appalling prejudices about black people.

In essence, the rap on Churchill is that he was a 19th century man parachuted into the 20th. But is that not precisely to the point? It took a 19th century man—traditional in habit, rational in thought, conservative in temper—to save the 20th century from itself. The story of the 20th century is a story of revolution wrought by thoroughly modern men: Hitler, Stalin, Mao and above all Lenin, who invented totalitarianism out of Marx’s cryptic and inchoate communism (and thus earns his place as runner-up to Churchill for Person of the Century). And it is the story of the modern intellectual, from Ezra Pound to Jean-Pierre Sartre, seduced by these modern men of politics and, grotesquely, serving them.

The uniqueness of the 20th century lies not in its science but in its politics. The 20th century was no more scientifically gifted than the 19th, with its Gauss, Darwin, Pasteur, Maxwell and Mendel—all plowing, by the way, less-broken scientific ground than the 20th.

No. The originality of the 20th surely lay in its politics. It invented the police state and the command economy, mass mobilization and mass propaganda, mechanized murder and routinized terror—a breathtaking catalog of political creativity.

And the 20th is a single story because history saw fit to lodge the entire episode in a single century. Totalitarianism turned out to be a cul-de-sac. It came and went. It has a beginning and an end, 1917 and 1991, a run of seventy-five years, neatly nestled into it. That is our story.

And who is the hero of that story? Who slew the dragon? Yes, it was the ordinary man, the taxpayer, the grunt who fought and won the wars. Yes, it was America and its allies. Yes, it was the great leaders: FDR, de Gaulle, Adenauer, Truman, John Paul II, Thatcher, Reagan. But above all, victory required one man without whom the fight would have been lost at the beginning. It required Winston Churchill.