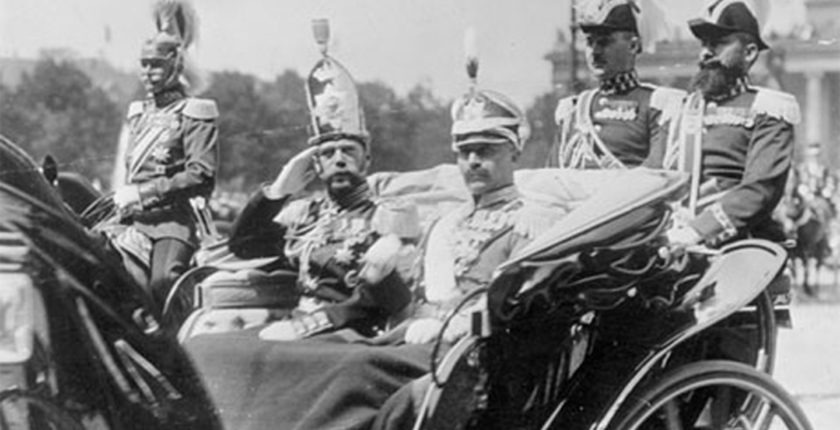 Churchill’s faith in personal diplomacy—solving intractable problems by meetings at the highest level—was famously expressed during his World War II meetings with Stalin and Roosevelt. It surfaced again in 1953-55, when he strove unsuccessfully to promote what he called “a meeting at the summit” with Eisenhower and Stalin’s successors.

Less widely known, however, is Churchill’s 1914 proposal for a “conference of sovereigns” or heads of state (including, it seems, French President Raymond Poincaré) in an effort to head-off World War I. The scheme failed, but certainly not for Churchill’s lack of trying.

At this stage in his career, even Churchill did not have the temerity to suggest himself as Britain’s plenipotentiary, although, as Professor John Maurer has written, he was quite ready to meet personally with his counterpart, Admiral von Tirpitz, head of the German Navy, over what Churchill called a “naval holiday”—mutual equivalent reductions in warship building by both powers.

That having failed, Churchill tried to promote an even higher-level meeting, between the kings and emperors themselves. This was not unprecedented; some sources state that Kaiser Wilhelm proposed a peace conference after the Sarajevo assassinations, and private messages were being exchanged between the Kaiser and Czar Nicholas in the days before war was declared.

There is little on Churchill’s “kingly conference” in the literature. There is no reference, for example, in Churchill’s The World Crisis, Asquith’s memoirs, or biographies by Manchester, Jenkins, Rose, Charmley and Birkenhead, though Sir Martin Gilbert includes in the official biography an excerpt from the then President of the Board of Education’s diary, which records Churchill’s words of warning in the cabinet of July 27th:

“Churchill said we were now in a better than average condition, & the fleet was at war strength…. Churchill, however, added: it was an appalling calamity for civilised nations to contemplate & thought possibly sovereigns could be brought together for sake of Peace.”1

There is no evidence that Asquith mentioned it in his report to King George V (the only written record of cabinets in those days). But Professor David Dilks suggests that Asquith might well have written of it to his lady friend, Venetia Stanley, in whom the Prime Minister confided a great deal.

If he did, it is not in Asquith’s published letters. On the morning of July 28th, he wrote Venetia: “Winston on the other hand is all for this way of escape from Irish troubles, and when things looked rather better last night, he exclaimed moodily that it looked after all as if we were in for a ‘bloody peace.’”2

Asquith tended often to put the least charitable spin on Churchill’s machinations—but why had things looked “rather better” on the 27th? The reason may have been the “Kingly Conference.” The editors of the Asquith-Stanley letters write:

“Lichnowsky [the German ambassador to Britain] told Grey on the afternoon of July 27th that the ‘German government accept in principle mediation between Austria and Russia by the four powers, reserving, of course, their right as an ally to help Austria if attacked. France and Italy also accepted the conference proposal.’”3

Alas, this hope was quickly dashed. On the evening of July 27th the British ambassador in Berlin telegraphed: “Secretary of State for Foreign Affairs says that conference you suggest would practically amount to a court of arbitration and could not, in his opinion, be called together except at the request of Austria and Russia. This reversal seems to have resulted from [German Chancellor] Bethmann-Hollweg’s belief, which the Kaiser did not share, that Russia would not intervene to save Serbia if this were known to risk war with Germany.”4

That was the end of the “kingly” initiative, although Churchill, who had on “all his war paint,” according to Asquith, did not give up. On July 28th Churchill wrote his wife from the Admiralty, showing his continued wish for peace while gearing up for war:

“I cannot feel that we in this island are in any serious degree responsible for the wave of madness which has swept the mind of Christendom. No one can measure the consequences. I wondered whether those stupid Kings and Emperors could not assemble together and revivify kingship by saving the nations from hell but we all drift on in a kind of dull cataleptic trance. As if it was somebody else’s operation!”5