Indians are getting post-truth history about Winston Churchill 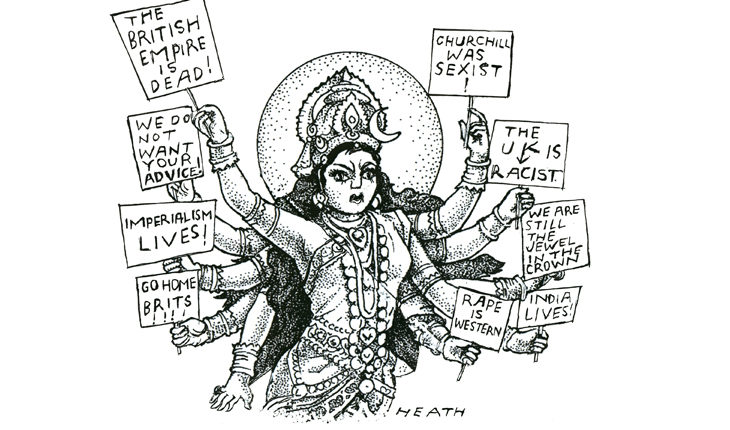 At the Jaipur Literary Festival, I was on a panel discussion entitled ‘Churchill: Hero or Villain?’, where the Indian biographer Shrabani Basu told a large crowd that at a suffragettes’ demonstration outside Parliament in November 1910, Churchill, then home secretary, had ‘given instructions for police that they can batter the women and assault the women and sexually assault them as well’. He allegedly told policemen to ‘put their hands up their thighs, they can grope them and press their breasts’. ‘Can I just point out that that is completely untrue?’ I intervened. ‘He at no stage ever OK’d the sexual assault of any woman ever. It would be monstrous were it to be true, but there’s no evidence for it.’ To which Ms Basu replied: ‘It’s your word against mine.’ Welcome to post-truth history.

I’d been invited to the city of pink palaces by my friend and Cambridge contemporary Willie Dalrymple, who had also invited me to defend Brexit, speak on the art of biography, and plug my biography of Napoleon. The title of Willie’s best-known book, White Mughals, might well have been autobiographical, so much does his presence dominate the festival that was his brainchild and which is now celebrating its tenth year. He is the pasha of all he surveys.

It’s the world’s largest paid-ticket literary festival, so I was expecting large crowds, but nothing like the 3,000 people who turned up for the Brexit debate, covering the whole front lawn of the Diggi Palace. I was the sole Brexiteer on a stage of six people, but it went off all right, especially when I asked the crowd if, at their ‘midnight hour’ of independence in 1947, they had been told they would have better trade deals and market access by staying in the British empire, they would have foresworn their chance for sovereign independence.

The other panellists seemed to think that the British had voted for Brexit in an act of post-imperial nostalgia, an idea that went down well with an audience who seemed fanatically angry with the British empire even three-quarters of a century after it lost its jewel in the crown. Really? It would be nice to think that the 17.4 million people who voted Leave still thought, or indeed knew very much, about the British empire, but surely other more immediate things were on our minds. I’m about the last public supporter of the empire left in Britain today, yet imperialism didn’t cross my mind throughout the Brexit debate, except perhaps Brussels’. If the people of Sunderland had voted Leave because of what happened on the Indian subcontinent between 1875 and 1947, wouldn’t someone there have said so? At Jaipur, the empire was regularly presented as having no redeeming features whatever — but here’s a sentence from the coffee-table book in my hotel lobby, Rajasthan: the Living Traditions (1999). Writing of the practice of suttee (abolished by the British), it states: ‘The ladies went to their deaths with dignity, in the manner of a celebration.’

Anita Anand chaired the biography panel, which also featured A.N. Wilson, Roy Foster, Suzannah Lipscomb, David Cannadine and Lucinda Hawksley. She asked us whether biographers had anything in common with serial killers, ‘who also like to cover themselves with the skin of dead people?’ She later equated us with stalkers, for the way we intrusively try to find out everything about our subjects’ lives. Another good line came from Andrew Wilson, describing an archivist who shall be nameless but with whom several of the panellists had had run-ins in the past, who he said had ‘now taken off on her broomstick and flown away over Slough’.

During the Napoleon interview, expertly conducted by Dr Swapan Dasgupta MP, I became aware of a gigantic monkey sitting on a wall behind the thousand-strong crowd, which seemed to be listening intently to what was being said. I found myself trying to retain the interest of this magnificent primate and started to gesticulate far more than I normally do. I’m pleased to say it stayed to the end, even through the Q&As. Living cheek by jowl with dozens of different animals is a knack most urban Britons have lost, but in Jaipur I was reminded of how natural it is in India. There were cows meandering nonchalantly down the middle of motorways with storks standing on their backs, feral pigs the size of small ponies, donkeys and camels, cockerels on the rubbish tips, a goat sitting on a car roof, an ostentation — great collective noun — of peacocks at our hotel, flocks of bright green parrots, and everywhere mongrel dogs that for some reason all looked identical.

After a day hearing all about the evils of the British empire, it was refreshing to attend the party Meru Gokhale threw to celebrate Penguin’s 30th anniversary in India, which was as grand a durbar as any viceroy ever attended. Horse-drawn carriages and vintage cars brought the guests to the front steps of a palace which were flanked by two military bands and beyond which were 2,000 candles flickering in the trees. India is about to attain economic superpower status and it’s unbecoming for the country still to try to cling to victimhood status. The Times of India has had to run headlines such as: ‘Don’t Blame West for Molestations, Rapes Here’. (The paper also has adverts for ‘upper-caste brides’ in its lonely hearts column.) With regard to Churchill, it’s the sign of a self-confident people that they can ascribe greatness to people who actively disliked them, as we do for the anglophobic Thomas Jefferson, Napoleon Bonaparte and Charles de Gaulle. But after such splendid hospitality, I wasn’t about to tell 3,000 Indians that it was time to grow up.