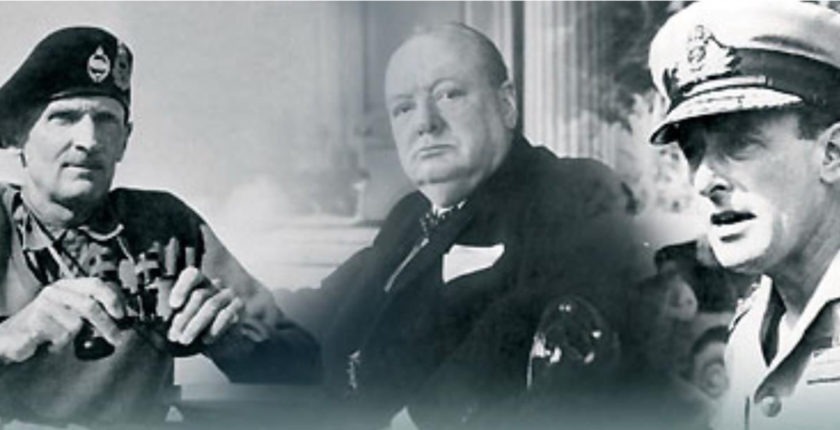 Hollow Heroes: An Unvarnished Look at the Wartime Careers of Churchill, Montgomery, and Mountbatten, by Michael Arnold. Casemate, 304 pages,  $34.95, Kindle $9.99.

“If this book were stripped of its impertinence, conceitedness, and tedious digressions it would be almost worth reading and would then be two-thirds smaller than it is.”
—Jonathan Swift

In 1840, Englishman and polymath John Stuart Mill philosophized that the best time for judgment is “when the noisy conflict of half-truths, angrily denying one another, has subsided….”1 As the decades separating us from World War II increase, professional historians strive to produce thoughtful, well-researched studies that enrich our understanding of the war’s characters and events, building on the work of their colleagues. In Hollow Heroes Michael Arnold, a self-described amateur historian and former insurance company executive, contributes nothing new and detracts considerably from the efforts of his predecessors.

Mr. Arnold attempts to grapple with wartime mistakes of Bernard Montgomery, Louis Mountbatten, and Winston Churchill, mixed with admiration for German military strategy. When not discussing tactics or strategy, he relies on oversimplification, insinuation, conjecture and the occasional rant. Too much historical context would apparently mar the cartoon-like version of history this book strives carefully to present.

After invoking “the Socratic principle of ‘following the evidence wherever it leads’” (7), and claiming to write “for the sake of those who needlessly suffered or lost their lives” (18), Mr. Arnold confuses and betrays readers when he omits the best sources available, and ruthlessly cherry-picks from the few he does mention. Several personalities and talents whose careers suffered unfairly during and after the war, namely Archibald Wavell, Claude Auchinleck, and Eric Dorman-Smith, are noted, but even they are portrayed more as one-dimensional victims than as three-dimensional actors. Either Mr. Arnold fears the reader cannot be trusted with all the facts, or he is ignorant of many of them himself.

The opening chapter, like much of the book, is more remarkable for what it doesn’t contain. To explain the inadequacies of the British Army before the war, it glibly damns everything from the class system to liberal arts education. But there is no analysis of how institutional culture can affect performance. It fails to acknowledge Army criticisms which historians have already identified. David French’s Raising Churchill’s Army, for example, noted that while the army had strong tactical units and modern machinery, it seriously neglected the importance of a well-trained infantry.

After a bewildering end to this chapter, remarking (incorrectly) on why the dinosaurs became extinct, the book launches into what seems to be its central mission: naming Churchill as the unbalanced, borderline-insane man to blame for enabling Montgomery and Mountbatten to wreak havoc, a prime minister who rendered little save symbolic help to the war effort.

The portrayal of Churchill as an unprincipled, ambitious, short-sighted, maniacal tyrant is so simplistic and incomplete that even his critics would express disbelief. We encounter such penetrating lines as “This again was indicative of Churchill being Churchill” (82) or “the only conclusion that can be drawn [was] some weird personal prejudice or a mental block” (85). Ah, to be so above the fray seventy-five years removed from a war for survival.

Churchill is “depression-fearing” (46), a “virtual dictator” (78), who is “always quite indifferent to casualties” (123), who hurls “one fanciful order after another” at his generals (50). Readers would do well to refer to accounts which correct and explain these mythical views and their roots.2

In distorting the record, Mr. Arnold misses genuine criticisms by ignoring so many facts. His approach leads to serious omissions in his review of such controversial subjects as the invasion of Greece and the loss of Singapore.3 An incomplete understanding of Churchill and his commanders enables an especially bogus paragraph comparing Churchill with Hitler (208-09). By comparison see Eliot Cohen’s triptych on Churchill and his Military Commanders.

A sample of the author’s superficial analysis is his mention of Churchill’s “Iron Curtain” in 1946. With ghoulish delight he accuses Churchill of plagiarism, for stealing the term “iron curtain” from Nazi propagandist Joseph Goebbels. The late historian John Ramsden had the real story:

“Iron curtain” was first used by the queen of Belgium to describe the division of her country by the German invasion of 1914, and first applied to Russia by the British socialist Ethel Snowden. Churchill borrowed it to describe Russia after the 1917 revolution in The World Crisis, and thus used it long before the Nazis. In 1944-45 it was fairly widely applied to Eastern Europe after the advance of the Red Army, by the Times (London) in an editorial as well as by Germans. At that time Churchill also used it in a telegram to Truman, and (in this version “an iron fence”) he had even used it to Stalin face-to-face (and received the reply, “All fairy stories!”).4

Arnold’s tribute to the lesser-known characters is troubled by his spotty, polemical approach. This is a pity because he seems to have the time, passion, and energy to make some contribution, however small, to the popular literature on certain subjects. In this effort, however, Jonathan Swift’s criticism of a 1720 travel book is apposite: “If this book were stripped of its impertinence, conceitedness, and tedious digressions it would be almost worth reading and would then be two-thirds smaller than it is.”5

While this reviewer agrees with Richard Hofstadter that democratic societies are wise to be overcritical rather than overindulgent towards public leadership, it is imperative that criticism be based on a full account of the facts, not poorly-researched polemics.6

2 To name a few: Geoffrey Best, Churchill and War (New York: Hambledon and London, 2005); Max Hastings, Winston’s War: Churchill 1940-1945 (New York: Alfred A. Knopf, 2009); John Keegan, ed., Churchill’s Generals (New York: Grove Weidenfeld, 1991); and Document Volumes 14-18 of the official biography, Winston S. Churchill. Typical of Churchill’s attitude toward casualties was his remark to his wife on the eve of D-Day: “Do you realise that by the time you wake up in the morning, 20,000 men may have been killed” (Martin Gilbert, Winston S. Churchill, VII, 794).

6 Richard Hofstadter, The American Political Tradition and the Men Who Made It (New York: Random House, 1989), x.