Hamilton’s Churchill: An Obsessive Who Worsened a President’s Illness 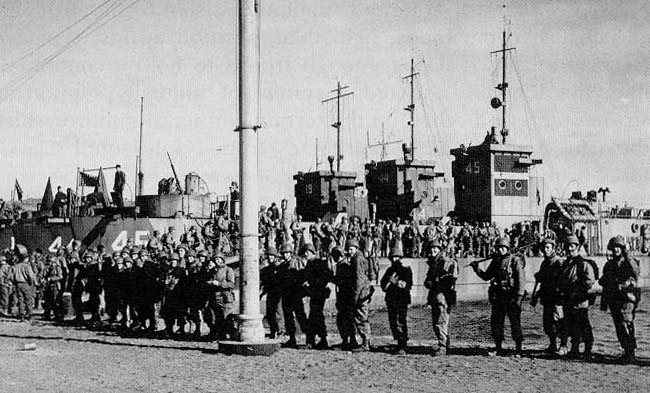 Soldiers of the Third Ranger Battalion board landing craft for Anzio, January 1944. Two weeks later, nearly all would be killed or captured. In the cheapest of cheap shots, Hamilton describes them as unwitting servicemen who died “once Churchill emerged from his Lazarus-like bed” in Carthage. (U.S. Army, Wikimedia)

This book is, ostensibly, volume three of a biography of Franklin D. Roosevelt, following Mantle of Command and Commander in Chief. Whatever the previous volumes offered about FDR, this one warrants a title different from the pretentious borrowing of Tolstoy’s War and Peace. “Churchill’s War against Roosevelt,” a far less grand sweep than Tolstoy’s, would be my choice.

Let’s begin with the allegation by author Hamilton that, since publication of Churchill’s war memoirs, historians have “whitewashed” his actions and his “sabotage” of delaying or even canceling operation Overlord (D-Day—the Anglo-Canadian-American invasion of western France). We historians have been seduced, Hamilton argues, by Churchill’s prose and his editing of his wartime volumes.

If Churchill had his way, Hamilton declares, the Normandy invasion would not have taken place until 1945—if then! To raise the stakes higher, he claims “Hitler was right” in saying that Normandy would “decide the war” (xi, xiii, 227). What a quote from a leader who, thankfully, proved the worst strategist of all the World War II leaders. It ignores (as does Hamilton) the reality that the Red Army engaged and crushed the bulk of German ground forces; something most historians of the war came to recognize decades ago. 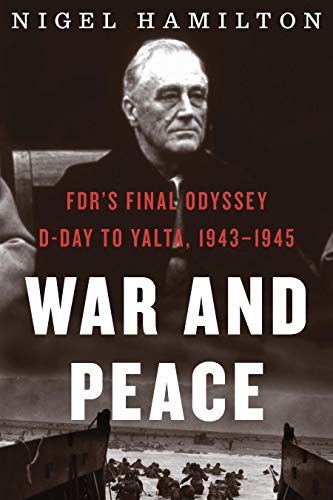 here is the source work?

All this is either an indication of Hamilton’s scope of reading, or of an obsessive search for a “hook.” Perhaps both. He must not have read or even scanned the vast literature chronicling and analyzing Churchill’s views of the Normandy invasion. Historians are automatically and appropriately skeptical of memoirs. Churchill himself said that they were not history but “my case”—a caution historians have known about at least since the early 1970s. It took until the mid-1970s, and the opening of both British and U.S. wartime records, to pin down the flaws in those memoirs. But pin them down historians did. And the PM’s relevant correspondence has now been published in The Churchill Documents, Volume 19 and Volume 20.

Decades ago, I described his war memoirs as Churchill’s preemptive strike against history. Many others, before and after, shared that opinion. Eventually David Reynolds, precisely and brilliantly, demonstrated the accuracy of this presumption in his definitive study, In Command of History: Churchill fighting and writing the Second World War (2004). That is one of the very, very few histories Hamilton cites, a sign that he believes he has a broader, more complete knowledge of events, He does not need mere historians to help create the context.

Hamilton even fails to acknowledge historians who agree with his allegations. Conrad Black, for example, likewise raises Franklin Roosevelt to the level of indispensable war-winner and treats Churchill as a hurdle for the President. But he does so with without insults and nastiness. (Black’s 2003 book is not in Hamilton’s endnotes, and he provides no bibliography.)

General Sir Alan Brooke, the British military chief, is, of course, constantly whispering from the wings via quotes from his diaries. He wrote most of them as a catharsis after late-night arguments with Churchill. But his quotes are mostly taken from the two volumes over-edited by Arthur Bryant (1957-59), rather than the definitive collection edited by Alex Danchev and Daniel Todman (2001). As historian Christopher Harmon put it:

Bryant’s volumes were something of a scandal for their pungent, even brutal words about Churchill…. Read anew however, the entries seem to show that it was the strains and storms of war—more than Winston Churchill—that made these times so hard on Alanbrooke, whose utter exhaustion seeps through his prose. Penned for his wife, ostensibly with no intent of publication, the diaries were a steam vent for dealing with pressure.

Lord Moran, Churchill’s doctor, is omnipresent in Hamilton’s story when nasty personal remarks about Churchill are needed. Elliott Roosevelt (anti-colonialism) and Mackenzie King (Churchill’s drinking) pop up with negatives. And so it goes.

Hamilton’s book suffers from a near complete lack of understanding about how alliance politics and postwar hopes and plans consistently affected grand and theater strategies and decisions. Isolating the thinking of Churchill or Roosevelt is a fatal distortion. Yet Hamilton pays scant attention to how postwar matters often determined FDR’s arguments and actions. It was a world war. (He does acknowledge Churchill’s oft-expressed concerns about preserving the Empire-Commonwealth, but largely as a passing thought.)

The reality was that the Churchill-Roosevelt axis pivoted on a point in the Kremlin—“Uncle Joe.” Keeping Russia in the war and avoiding a Third World War were fundamental to all that Churchill and Roosevelt did. Defeating Hitler’s Germany was the sine qua non for the Big Three. It brought Churchill toward Moscow, however cautiously, caution that grew to distrust by 1945. Roosevelt had foreseen being allied in some way with the Soviet Union as early as the Lend-Lease debate in early 1941, and rebuffed any prohibition on Lend-Lease aid to Russia.

Hamilton argues, vehemently and nastily, about which great man, Churchill or Roosevelt, was indispensable, with FDR his obvious selection. My own answer is both of them (together) and neither of them. Thomas Carlyle famously argued that “the history of what man has accomplished in this world, is at bottom the History of the Great Men who have worked here.” But as Leo Tolstoy illustrated in the real War and Peace, accomplishments and failures are much more than the result of single causation.

The phrase “Let us now praise famous men” (The Wisdom of Sirach, Ecclesiastes, 44:1) may offer a lead-in to doing just that. A telling use of the Biblical phrase is a book of that name by James Agee and Walker Evans—a penetrating 1941 study of three poverty-stricken “dust bowl” farmers in the American South. These were in a special way great men, just as were the plucky, stubborn Londoners who withstood the Nazi Blitz, with Churchill’s soaring rhetoric always in the background. Churchill and Roosevelt were in a special way great men. Yet Charles Krauthammer, arguing for Churchill’s indispensability, does not fail to mention the little people who helped win the war.

Reading this book is like being pecked to death by ducks, except Hamilton does it mostly with adverbs and adjectives, though the occasional noun or verb sneaks in. “Sabotage,” “shameful,” “ominously,” “antics,” “supposedly” and “unfortunately” (which is everywhere), are routinely attached to Churchill’s actions and arguments. For a sample of that technique, read Chapter 5, one of Hamilton’s mini-chapters, oddly shoe-horned into the text, only eight pages long. Biographers frequently put words and thoughts in their subject’s mouth and mind, all too often without citations and rarely in the subjunctive case. Hamilton sets new records, e.g., Chapters 9 and 60. Yes, 60.

Back to wartime reality. Ignoring the Anglo-American-Soviet unity exhibited at the Moscow conference of foreign ministers in November 1943, Hamilton writes that, late in 1943, “the Allied coalition faced the danger of being split apart by Winston Churchill and the British.” The most threatening confrontation of allies since Caesar and Pompey, he calls it.

The facts: At the first Big-Three conference in December 1943 at Teheran, Stalin began by bluntly and forcefully insisting on the Second Front in western France. There was never the slightest chance that FDR together with Stalin (the pairing matters) would support Churchill’s proposals for possibly delaying Overlord in order to provide landing craft for Italy or campaigns in the Aegean.

Perhaps the cheapest shot in the book concerns Churchill’s return from Teheran via Carthage, where he almost died in January 1944. Hamilton writes: “The trip, for Churchill, had been far from triumphant, however, and the ‘comparative rest’ would prove lethal for tens of thousands of unwitting Allied servicemen in Italy, once Churchill emerged from his Lazarus-like bed” (177). The “lethal” reference is, of course, to the Anzio landing south of Rome in January 1944, which went badly.

It is utter nonsense for Hamilton to state that Roosevelt was “the only man powerful enough to stop Churchill from wrecking Overlord.” Irrespective of Churchill’s wishes, his having any chance of “sabotaging” D-Day is sheer fiction. FDR “made nice” to Stalin not to put down Churchill’s “insurrection,” but in keeping with his long-term strategy of building Stalin’s confidence in the Anglo-Americans; first to keep Russia in the war, second with hope for a cooperative postwar settlement. (See Hamilton, 41-51 for quotes.) This is much ado about nothing—unless trashing Winston Churchill is the real purpose of the book. It is surely not the memoir that FDR never wrote—nor a biography.

Time and time again, Hamilton builds a great mountain out of a molehill, consistently making the dubious point that the Prime Minister was a worrisome, wearying burden on the President. Italy was Churchill’s prime diversion. Churchill blamed the rebuffs at Anzio on insufficient support from the Americans and timid American generalship. Hamilton condemns the attack as an unnecessary bloodbath that contributed to Roosevelt’s increasingly precarious health. Churchill’s tactical and strategic mistakes with military actions during his long career are often criticized. But even had Anzio succeeded (and like most amphibious landings it was a “close run thing”), it would not have changed the course of the war. Why would Hamilton raise it to a major issue, except to depict Churchill as an obsessed fool?

Hamilton simply makes too much of every difference. Churchill’s proposal of an attack through Ljubljana Gap (dismissed by his military advisers whom he rarely if ever directly overruled) is mocked and scorned. Properly so, most historians argue. But just making the proposal had no impact on history. The same for his steady stream of invasion schemes for Rhodes and various tiny German-held islands in the Aegean. General Marshall (not FDR) famously confronted a frustrated Churchill, saying, “not one American soldier is going to die on that goddam beach.”

Churchill’s Aegean schemes were not a health-threatening burden for the President. To intimate that Churchill put preserving the British Empire or medals for British soldiers ahead of winning the war is ludicrous. Moreover, we know that Churchill did not at that time propose those campaigns as some sort of early Cold War move to get to Eastern Europe before the Russians. Defeating Germany always came first.

Hamilton attributes Roosevelt’s performance at the February 1945 Yalta Conference, long given over-exaggerated importance, to serious health problems (plausible). But he then says Churchill’s continual conniving and stubbornness, particularly about Poland, “tragically” wore the president down (implausible, or at least arguable). Hence, “FDR failed.” Hamilton seems unaware of Roosevelt’s long-held views, stated as early as autumn 1941. These, particularly the “four policemen” which later translated into the UN Security Council, were all achieved. One can more readily argue that FDR succeeded.

Hamilton begins with a disingenuous claim: “Sir Winston – whom I deeply admired . . . .” He then goes on to vindicate himself by being “a historian and biographer.” With admirers like Hamilton, the memory of Churchill needs no enemies.

WARREN F. KIMBALL, author of Forged in War: Roosevelt, Churchill and the Second World War; The Juggler: Franklin Roosevelt as Wartime Statesman; and books on the Morgenthau Plan and the origins of Lend-Lease. He also edited the three-volume Churchill & Roosevelt: The Complete Correspondence (with commentaries). He has published over fifty essays on Churchill, Roosevelt and the Second World War. Robert Treat Professor (emeritus) at Rutgers University, he was Pitt Professor at the University of Cambridge, 1987-88. His institutional history, The United States Tennis Association: Raising the Game, was published in December 2017. He was the Jones Distinguished Professor at Wofford College (Spartanburg, S.C.) in spring 2019.