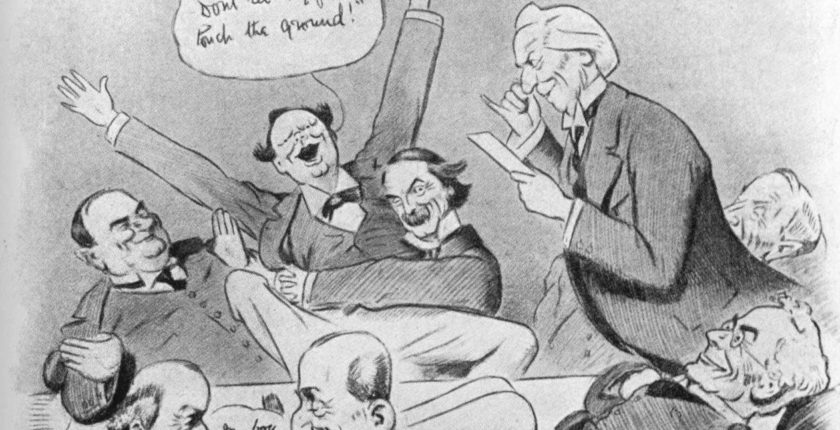 Why have we not all heard of Richard, Viscount Haldane? The list of his achievements is extraordinarily long. Yet beyond a blue plaque outside his home in Queen Anne’s Gate, there is no memorial to him. John Campbell’s well-researched new biography proves he was indeed, as the subtitle argues, “the forgotten statesman who shaped modern Britain.” Indeed, not just Britain. Much of Canada’s constitutional arrangements between provinces and federal government were his work too. So why was Haldane forgotten? 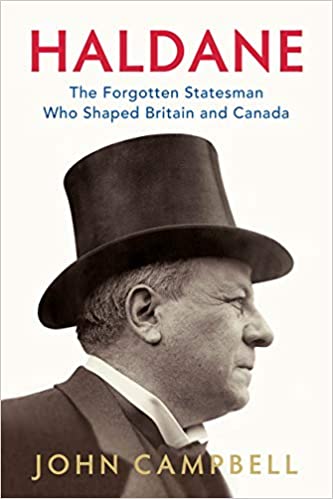 First, let’s canter through the achievements of this podgy Scottish paragon and philosopher-statesman. Haldane helped found so many British institutions that is hard to imagine what our country would be like without them. Most are so well known that they only need three-digit acronyms: LSE, OTC, RAF, BEF, MI5, MI6. There are others: the Imperial General Staff, Territorial Army, Imperial College London, Medical Research Council, and Committee of Imperial Defence. Haldane was instrumental in founding them all. He was also the finest Secretary for War in British history (admittedly a pretty open field). He’s the reason Britain conveyed 120,000 troops over the Channel in fifteen days to help save Paris in 1914.

Under normal circumstances, therefore, there ought to be at least ten memorials to Haldane, instead of one measly blue plaque. I sense the reason. The problem is that he was a Liberal Imperialist. Conservatives didn’t like him because he was a Liberal, Liberals because he was an imperialist. He joined the Labour Party as its first Lord Chancellor. But socialists don’t like him because, for all his friendship with fellow-intellectuals Sidney and Beatrice Webb, he never embraced socialism. This hugely admiring biography shows that he was too much of a maverick to fit happily in any one party. Yet he was not magnetic enough a personality to attract admirers who would revere him after death.

Yet on top of all his achievements, Haldane deserves to be remembered as a warning of an eternal truth: At the apex of politics, there is no such thing as genuine friendship. Not listed in author Campbell’s otherwise comprehensive bibliography is Graham Stewart’s 2007 classic, Friendship and Betrayal. (Full disclosure: as literary editor of The Critic, he explores in detail the 30-year-long friendship between Haldane and Henry Herbert Asquith, the prime minister who took Britain into the First World War.

Haldane had been Asquith’s best friend since the early 1880s. He was best man at his wedding. He helped find Asquith’s Parliamentary seat of East Fife. Loyally, Haldane collaborated with Asquith to reform the Liberal Party. He served distinction as War Secretary and Lord Chancellor, lending great intellectual heft to Asquith’s ministry. Yet when Asquith needed the Conservatives to join a national government during the crises of a shells shortage, Dardanelles defeats and Fisher resignation in May 1915, Asquith immediately and ruthlessly knifed Haldane in order to stay in power.

Not even a “thank you”

Stewart’s book proved that the Tory leader Andrew Bonar Law had not even demanded Haldane’s ouster. He seems to have been quite content with merely forcing Churchill to resign. Asquith simply gave up Haldane without having been asked. Asquith sent Haldane no word thanks, regret or even explanation, merely dropping him a hastily scribbled note: “We must put aside everything for which we care personally.” Then with almost Trumpian levels of narcissism, Asquith told Herbert Samuel, a minister he had demoted in the reshuffle, “No one knows how much I have suffered… No-one has made a greater sacrifice than I have.” True ruthlessness always goes better with a good garnishing of self-pity. (It is staggering to find Asquith listed under “friends, supportive” in the index of Campbell’s biography.)

Nor was Haldane replaced as chancellor by one of the Tory big beasts such as Sir Edward Carson. His replacement by the relatively unknown Sir Stanley Buckmaster made his humiliation worse. Asquith’s behaviour despicable. The Conservatives wanted Haldane sacked, he thought, after a chauvinistic press campaign by the Northcliffe and Beaverbrook newspapers. They had accused Haldane—with no evidence whatever—of being German sympathizer.

The Tory press hated that Haldane had been educated at Göttingen University, spoke German fluently, admired Goethe and Hegel, had negotiated twice with Kaiser Wilhelm, and led the Haldane Mission to Germany to try to ward off the Great War. Disastrously, he was also once overheard telling visiting German artists and writers that Germany was his “spiritual home.” That was quite enough for the yellow press and The Times—at a time when dachshunds were reputedly kicked in the street for their nationality—to label Haldane pro-German and to imply that he was a traitor.

Mainstream media, then as now

Modern politicians often complain of their rough handling by the press. It’s nothing compared to what Haldane received during the first nine months of the war. He was labeled a German spy; the Kaiser was his illegitimate half-brother; he had a secret wife in Germany. The Haldane Mission had intended to surrender the Empire to Germany, and so on. After one attack in the Daily Express, Haldane received 2600 hate-letters at the House of Lords. Nicknamed “the Member for Germany,” he needed a bodyguard until the Armistice because of continued threats. Neither this book nor any I’ve read explains why Haldane didn’t simply sue Beaverbrook and Northcliffe for their repeated libels (and in the latter’s case also aggravated slander), and force the press barons to try to defend them in open court.

By May 1915, Haldane had become a serious liability to the Liberal Government. Instead of doing the honourable thing and facing down the media, Asquith offered up his old and close friend up as a scapegoat—along with Churchill. Pleasingly, it failed to work, even on the political plane. Soon the jingo press turned on Asquith himself, who was forced to resign in December 1916. Asquith told the King privately that Haldane should have “a statue in gold for preparing the nation for the war.” But he had said nothing to defend his friend in public.

“Philosophy was fundamental to every aspect of Haldane’s life,” John Campbell tells us. Haldane certainly took his dismissal philosophically, although his friendship with Asquith was of course ruptured beyond repair. Nor did Haldane relinquish his love for German science and culture as a result of media slanders. When Albert Einstein first visited Britain in 1921, his stayed at Queen Anne’s Gate.

Churchill’s career overlapped Haldane’s on several occasions. Haldane was War Secretary in 1908 when Churchill, President of the Board of Trade, wanted drastic military retrenchment. (Accusations that Churchill was a warmonger wanting larger armament spending are wholly untrue. He believed in tailoring spending to the level of threat, not as serious in 1908 as in 1914.) Churchill’s three trenchant 1908 memoranda on cutting the military budget came up sharply against Haldane. Churchill then believed threats from Russia on the Indian frontier—where he had himself served—and from the Kaiser, whose manouevres he had attended, could be dealt with “by skilful diplomacy and wise administration.”

Haldane counterattacked Churchill’s savings options on their specifics. With the support of Asquith, Edward Grey and John Morley, he defeated Churchill’s cost-cutting proposals. Haldane later enjoyed the seeming irony that in 1911, Churchill demanded much higher naval spending when he became First Lord of the Admiralty. By then, of course, the German threat was far greater, especially in the arms race over battleships. Haldane was disappointed that he himself was not offered the Admiralty. But Asquith recognised the force of Churchill’s argument that naval expansion needed defending in the House of Commons, whereas Haldane had recently been created a peer.

Campbell describes Asquith’s choice of Churchill as “a distressing blow” to Haldane. He got over it when he realized that  Churchill was going to create the new Naval Staff for he had long called for. It would mirror the General Staff Haldane created at the War Office. “Winston is full of enthusiasm about the Admiralty and just as keen as I am on the War Staff,” Haldane was soon writing to his mother. “It is a delight to work with him.”

“If it is wind, I shall call it Winston”

Churchill sat on a small subcommittee of the Committee for Imperial Defence. Chaired by Haldane, it worked out the “broad principles” of a national air service in 1911. Another member was Prince Louis of Battenberg, then Second Sea Lord. Like Haldane, he also came in for a good deal of ignorant anti-German invective after war was declared.

Haldane was forced to resign in 1915 for different reasons than Churchill, whom no-one had ever accused of being pro-German. Churchill wrote him a fine letter of condolence: “I trust the vile Press campaign of which you have been the object will not prevail, against the loyalty of your lifelong friends. I am so short of credit at the moment that I can only make an encouraging signal but you must take the will for the deed. I cannot tell you how grateful I am for your unfailing kindness to me.”

These Churchill mentions encourage me to tell the best anecdote in the book. It was one of the few times that WSC came off worse in a battle of wits. Churchill walked up to Haldane in the Commons lobby one day and tapped him on his huge tummy: “What’s in there, Haldane?” he asked. “If it is a boy,” Haldane replied, “I shall call him John. If it is a girl, I shall call her Mary. But if it is wind, I shall call it Winston.” Haldane deserves a golden statue just for that.

Haldane is the missing piece of the jigsaw puzzle explaining why so many British institutions are what they are. A fellow of the Royal Society and British Academy, President of the Aristotelian Society, he presided over the AGM of the London Library a few days before he died aged seventy-two in August 1928. The Times had enthusiastically participated in the unfounded slurs against his patriotism during the war. But now it described him as “one of the most powerful, subtle, and encyclopaediac intellects ever devoted to the public service of his country.”

It was true, but thirteen years too late.

This article is expanded from the author’s review of John Campbell Haldane: The Forgotten Statesman Who Shaped Britain and Canada. Published in The Critic, July-August 2020, it is quoted by kind permission. Andrew Roberts is the Roger & Martha Mertz Visiting Reader at the Hoover Institution at Stanford University. His biography, Churchill: Walking with Destiny, is the only work meriting two book reviews on this website. See Larry P. Arnn, “Man of the Century” and Richard M. Langworth, “The New Churchilliad.”