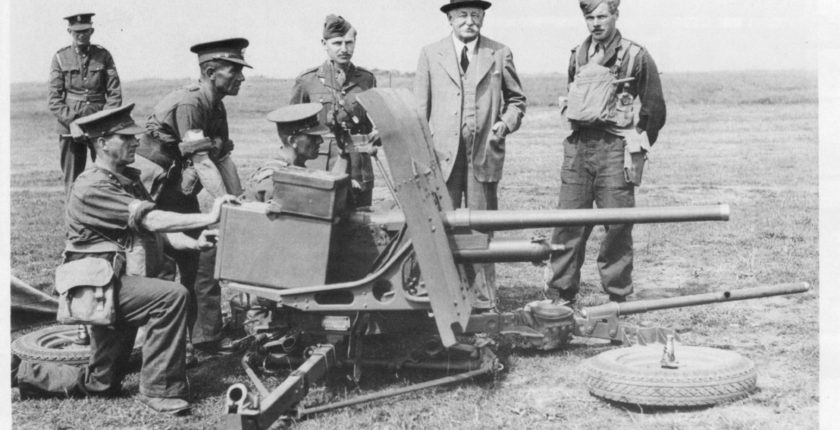 General Haking (in mufti), with the author (on his right in “non-working” uniform), Larkhill, Salisbury Plain, July 1939. (H. Ashley Redburn)

In “With the Grenadiers” (Thoughts and Adventures) Winston Churchill relates his experiences as attached to one of the Grenadier Battalions in the line in France.1

On 26 November 1915, he was summoned to meet the XI Corps Commander at Merville. A car would pick him up at Rouge Croix crossroads, three miles distant across muddy fields.

After an hour’s wait at the rendezvous, a disgruntled Churchill was told his car would not be arriving. It had been driven off by heavy German shelling of the line. The general had only wanted a chat; any other day would do. In darkness the angry, tired, sweating, rain-drenched Churchill returned to his billet. There he was be told that five minutes after he had left, a shell had blown up his dug-out. Suddenly, Churchill had a new outlook:

I felt my irritation against General ____ pass completely from my mind. All sense of grievance departed in a flash. As I walked to my new abode I reflected how thoughtful it had been to wish to see me again, and to show courtesy to a subordinate when he had so much responsibility on his shoulders. And then upon these quaint reflections there came the strong sensation that a hand had been stretched out to move me in the nick of time from a fatal spot. But whether it was General’s or not, I cannot tell.

It was one of his many brushes with death, which each time he somehow avoided. He frequently concluded that a Higher Power had in mind for him a greater destiny. “Over me,” he once said, “beat the invisible wings.”

“Yield to the mood and trust in God”

I read this years ago in Thoughts and Adventures. Not until 1975, reading Martin Gilbert’s third volume of the official biography2 did I learn his savior’s identity. He was General Sir Richard Haking GBE, KCB, KCMG (1862-1945). In a letter to his wife, Churchill goes into more detail. Trudging back through the rain,

I could see our trenches in the distance with great red brilliant shells flaring over them in fours and fives and could hear the shriek of the projectiles rising like the sound of a storm. It looked fierce and formidable but by the time I got near silence had descended. You may imagine how I abused to myself the complacency of this General—though no doubt kindly meant—dragging me about in rain and wind for nothing.

I reached the trenches without mishap and then learned that a quarter of an hour after I had left, the dugout in which I was living had been struck by a shell which burst a few feet from where I would have been sitting; smashing the structure and killing the mess orderly who was inside. Another orderly and one officer who were inside were shaken and rattled, and all our effects buried in mud and debris. When I saw the ruin I was not so angry with the General after all.

My servant too was probably saved by the fact that I took him with me to carry my coat. Now see from this how vain it is to worry about things. It is all chance and our wayward footsteps are best planted without too much calculation. One must yield oneself simply and naturally to the mood of the game and trust in God which is another way of saying the same thing.

…was commissioned into the (now Royal) Hampshire Regiment. His XI Corps suffered severe casualties at the second Battle of Fromelles in 1916. Historian Gordon Corrigan nevertheless regarded him as “intelligent and capable,” unfairly maligned. Refused promotion, he continued in command. XI Corps served in Italy and Flanders through the end of the war. Haking then headed the British section of the Armistice Commission.

In October 1919 Churchill and Field Marshal Sir Henry Wilson named Haking to head the British Military Mission to Russia. They were then still hoping for a triumph by the anti-Bolsheviks. Churchill had a high opinion of the General: “We think here that we should send at once to Petrograd a man like Haking who has done so well on the Armistice Commission, and would have the rank, balance and experience necessary to grapple with the problems that will then arise.”3 Haking eventually became its Colonel-in-Chief of the Hampshire Regiment until his death.

…was a “Minden Regiment,” one of six British Regiments which took part in the 1759 Battle of Minden, during the Seven Years’ War. On Minden Day, 1 August each year, its soldiers wore a rose in their caps to commemorate their predecessors who plucked and wore roses from the fields during the march into battle. In 1992, the Regiment joined the Queen’s Regiment to form the Princess of Wales’s Royal Regiment, which continues the traditions.

The Hampshire fought in four of Marlborough’s great victories: Blenheim, Ramillies, Oudenarde and Malplaquet. These names and Minden’s adorn its Battle Honours. One can easily see a mutual interest between Churchill and Haking. Alas there is no record of their discussions; nor do we know if Haking was aware he had saved Churchill’s life.

I first met General Haking at a Minden Day Regimental Dinner when I was attached—as a very junior second lieutenant—in the 6th (Duke of Connaught’s Own) Battalion, the Hampshire Regiment, a Territorial Battalion—for a period to the depot of the Regular Regiment in Winchester in 1938.

The 6th Battalion was converted into the 59th Anti-Tank Regiment. During annual training at Larkhill on Salisbury Plain in July, 1939, the General paid a visit. I was detailed to conduct him on a Regimental tour of inspection throughout the morning. It was an interesting morning. I recall he was most genial and amiable, and fully aware of the imminence of another world war.

He asked many searching questions about the role of an Anti-Tank Regiment—at times too searching for me. If only I had known he had unwittingly saved Churchill from a bomb, I might have deflected his questions with some of my own. If so this account would be greatly embellished.

The last time I saw General Haking was in December 1939, when the Colours of the 6th were paraded through the streets of Portsmouth and laid up in the Cathedral. He was present in uniform, a very soldierly figure at age 77, to take the Salute at the March Past. As the senior second lieutenant, I was proud to carry the King’s Colours on that occasion.

Henry Ashley Redburn (1912-1997), born in Leicestershire in 1912, took a History degree from Nottingham University. For four years he taught History in South Africa and England. In 1936 he joined the Territorial Army. On D-Day he landed on Sword Beach, Normandy; in November 1944, he joined the mopping-up forces in Burma. Mentioned in despatches, Redburn was demobilized in December 1945 with the rank of Lt. Col, the OBE (Military) and the Territorial Decoration. In 1949 he returned to the academy as Director of Education for Bamsley, South Yorkshire, until his retirement in 1972. He left me several eloquent pieces, including this one.  —Richard Langworth