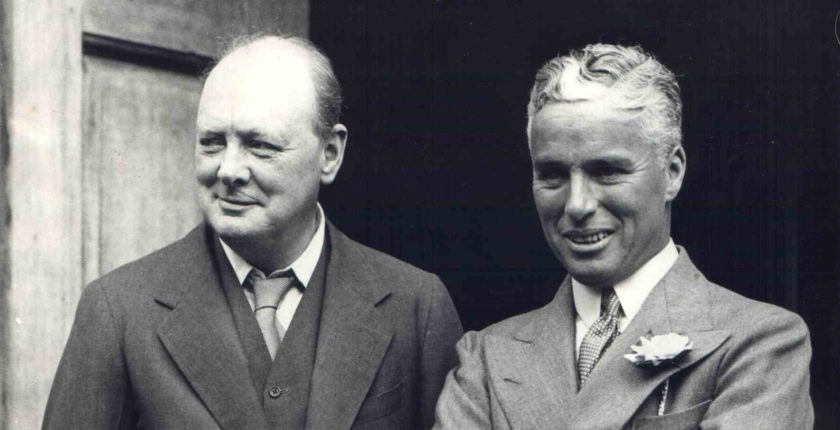 In the summer and autumn of 1929, Winston Churchill enjoyed a three-month tour of North America, his first visit to that continent since 1901. With his son Randolph, brother Jack and nephew Johnny, he traveled east to west in Canada, then down to the U.S. and from California east to New York. As ardent film fans, their visit to Hollywood was a highlight for the party.

They arrived at the film capital on Saturday, 21 September 1929, lunching at the Montmartre Restaurant, a hangout for the acting world. Among those attending were Churchill’s host, the newspaper tycoon William Randolph Hearst, his mistress the actress Marion Davies, and the English humorist P.G. Wodehouse, whom Churchill would later vilify for making broadcasts over the German radio during World War II.

Marion Davies invited the Churchills to her beach house, where they met film stars Pola Negri, Billie Dove, Diana Ellis, Harold Lloyd, and Charlie Chaplin, the English-born comic actor, filmmaker and composer. “I failed to recognize either Charlie or Harold,” Randolph wrote, “since moustache and horn-rimmed spectacles [their film trademarks] were missing.”1

“About fifty guests were milling about between the ballroom and the reception room when he appeared in the doorway with Hearst and stood Napoleon-like with his hand in his waistcoat, watching the dancing. He seemed lost and out of place. W.R. saw me and beckoned me over and we were introduced. Churchill’s manner, though intimate, was abrupt. Hearst left us and for a while we stood exchanging the usual comments while people milled about us. Not until I talked about the English Labour government did he brighten up. ‘What I don’t understand,’ I said. ‘is that in England the election of a socialist government does not alter the status of a king and queen.’”2

Churchill looked at the actor with an expression that was “humorously challenging.” “Of course not,” he replied. “I thought socialists were opposed to a monarchy,” said Chaplin. Churchill laughed. “If you were in England we’d cut your head off for that remark.” (Sixteen years later, when another Labour government was in office, Churchill wrote: “The Socialists are quite in favour of the Monarchy, and make generous provisions for it. They even go to parties at Buckingham Palace. Those who have very extreme principles wear sweaters.”)3

After dinner, Davies asked Chaplin to do impersonations, for which he was famous. Randolph remembered him impersonating Napoleon, Uriah Heep, Henry Irving, John Barrymore as Hamlet, and many others. That evening, a warmth developed between the pro-socialist Chaplin and the Conservative Member of Parliament. Randolph wrote that they sat up talking till 3am. Chaplin later hosted Churchill, Randolph and Jack at his Sunset Boulevard studio, where he showed them his film Shoulder Arms and screened rushes of his next movie, City Lights.

A few days later, Churchill invited Chaplin to dinner with his son at the Biltmore Hotel. Chaplin described Randolph as “a handsome stripling of sixteen, who was esurient for intellectual argument and had the criticism of intolerant youth. I could see that Winston was very proud of him. It was a delightful evening in which father and son bantered about inconsequential things. We met several times after that at Marion’s beach house before he returned to England.”4 On September 29th, from Hearst’s desert palace at San Simeon, Churchill wrote his wife:

At Los Angeles (hard g) we passed into the domain of Marion Davies; & were all charmed by her. She is not strikingly beautiful nor impressive in any way. But her personality is most attractive.…She works all day at her films & retires to her palace on the ocean to bathe & entertain in the evenings….We made g[rea]t friends with Charlie Chaplin. You c[oul]d not help liking him. The boys were fascinated by him. He is a marvelous comedian—bolshy5 in politics—delightful in conversation. He acted his new film for us in a wonderful way. It is to be his g[rea]t attempt to prove that the silent drama or pantomime is superior to the new talkies. Certainly if pathos & wit still count for anything it is out to win an easy victory.6

In February 1931, Chaplin was in London for the premiere of City Lights. At the time, Clementine was in America with Randolph, who was on a lecture tour. Churchill invited Chaplin and Hearst to Chartwell for the weekend. “We had a cold, bitter drive getting there,” Chaplin wrote. “Chartwell is a lovely old house, modestly furnished but in good taste, with a family feeling about it.”

The first evening apparently began badly. “He wanted to discuss the gold standard,” wrote William Manchester. “Churchill lapsed into a moody silence. Suddenly his guest snatched up two rolls of bread, thrust two forks in them, and did the famous dance from his 1925 film The Gold Rush. ‘Immediately the atmosphere relaxed,’ recalls [Churchill’s then Parliamentary Private Secretary Bob] Boothby, who was there, and thereafter we spent a happy evening, with both Churchill and Chaplin at the top of their form.’”7

Chaplin wrote that it was not until his second visit to Chartwell, the following September, that he really “began to know Churchill….In the dining room I noticed a still-life painting over the fireplace. Winston saw me showing a keen interest in it.” “I did that,” Churchill said. “But how remarkable!” Chaplin responded. “Nothing to it—saw a man painting a landscape in the south of France and said, ‘I can do that.’”8

“I was charmed by the simplicity and almost Spartan taste at Chartwell,” Chaplin continued. “His bedroom was a combined library with an overflow of books stacked up against the walls on all sides. One side was devoted entirely to Hansard’s Parliamentary Reports. There were also many volumes on Napoleon. ‘Yes,’ he admitted, I am a great admirer of his.’”9 Churchill then made a film suggestion:

I hear you are interested in filming Napoleon, You should do it—great comedy possibilities: Napoleon taking a bath, his brother Jerome bursting in upon him arrayed in gold-braided uniform, using the moment to embarrass Napoleon and make him acquiesce to his demands. But Napoleon deliberately slips in the tub and splashes the water all over his brother’s uniform, telling him to get out. He exits ignominiously—a wonderful comedy scene.10 On the spot, according to Randolph, his father promised to write the screenplay, but Chaplin did not make use of Churchill’s suggestion. Among the eighty motion pictures from 1914 to 1957 listed in Chaplin’s autobiography, there is no reference to Napoleon, nor any appearance of the proffered script in the Churchill canon.

Chartwell’s charms cemented their friendship. Churchill introduced the actor to Boothby and his Parliamentary ally Brendan Bracken. Naturally he showed his guest around Chartwell, pointing to his brick walls, of which he was very proud. Chaplin was astonished. Churchill said bricklaying was not as easy as it looked, but “I’ll show you how and you’ll do it in five minutes.” During the visit, Churchill’s daughter Mary remembered “a very good photograph;” “sadly for me, I was not included in the line-up—however, my pug-dog squeezed in!”11

The Churchill-Chaplin relationship is the subject of a new novel, Two Gentlemen on the Beach, by Michael Köhlmeier. Unfortunately, the fictional format cannot be relied upon to tell us much about their true relationship. The reader should refer instead to Churchill’s lengthy sketch, “Everybody’s Language,” also published as “Chaplin—The Man Who has Made the Whole World Rich with Laughter” (Cohen C480), reprinted in The Collected Essays of Sir Winston Churchill.

If they ever talked politics, it was not for long. Churchill enjoyed his film star friend for his professional accomplishments. He enjoyed Chaplin’s work, and their sprightly conversations. Chaplin for his part saw in Churchill a man who lived life large: “Sir Winston, I should imagine, had had more fun than most of us. On the stage of life he has played many parts with courage, zest and a remarkable enthusiasm. He has missed very few pleasures in this world. Life has been good to him. He has lived well and played well—and for the highest stakes and won. He has enjoyed power but has never been obsessed by it.”12

Churchill was probably too old at the time to have read Chaplin’s memoirs, but he would certainly have been pleased by his friend’s gracious words. Though both endured ups and downs in their lives, the friendship established in 1929 continued through the years.

Mr. Glueckstein ([email protected]), of Kings Park, New York, is freelance writer and a world traveler in search of Churchill.