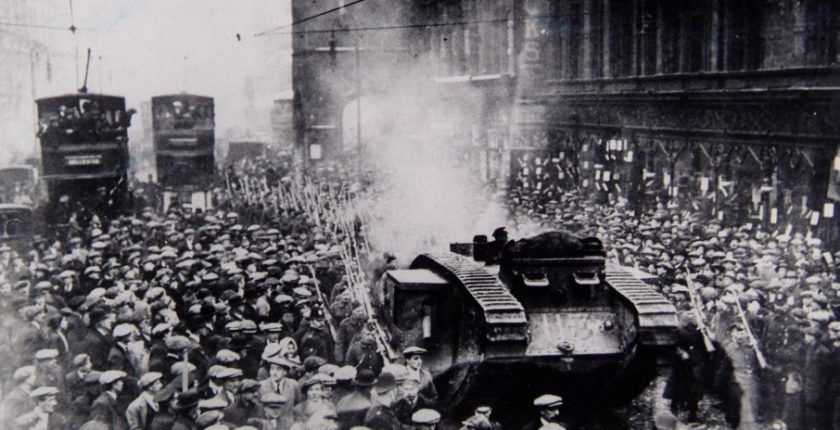 A striking example of misrepresentation, this photo is widely purported to be a tank and troops in the midst of the George Square strikers. In reality it’s from a year earlier, when the “Julian” tank 113 was part of a Glasgow war bond and war savings certificate drive which raised £14 million for the war effort. The photo was debunked by Russell Leadbetter in The Herald (Glasgow) on 18 January 2018.

“A century ago in ‘the Battle of George Square,’ Winston Churchill ordered 10,000 soldiers, along with tanks, artillery and machine guns, to attack 60,000 striking workers in Glasgow who were marching for a forty-hour work week.”

This tweet is typical of hundreds of social media postings early in 2019, when Scotland marked the centenary of a major riot. Supposedly, Churchill sent tanks to Glasgow, where soldiers caused injuries and even deaths.

Churchill’s “crimes” of 31 January 1919, are the ones most frequently leveled at him in Scotland. Google “George Square” and you will find numerous respectable websites repeating the charges, some including the inaccurately labeled photo above. The problem with all this is that Churchill was not guilty. Nor were any strikers actually injured or killed by troops. 1

George Square is probably the most mythologised confrontation in 20th century Scottish history. The version almost universally accepted, even taught in Scottish schools, was circulated by strike leaders after the riot, and in their subsequent memoirs. Some of them, such as the Labour Party’s Emmanuel Shinwell, became prominent politicians. 2

The myth that “Churchill sent troops” seems first to have appeared in print in 1973, in I’ve Lived Through It All, a memoir by Emmanuel Shinwell. No evidence was provided. In two later memoirs (1981 and 1984) Shinwell switched the blame to David Lloyd George, the prime minister in 1919. Possibly because Lloyd George does not share Churchill’s mythic stature, those versions have not achieved the same traction. 3

On 27 January 1919, Glasgow engineering workers in Glasgow struck for a reduction in the work week from fifty-seven to forty hours. In the unstable state of postwar Europe, some feared that widespread industrial unrest reflected revolutionary intentions. 4

The atmosphere was tense in Glasgow during the first week of the stoppage. Strike leaders pressured the Lloyd George government to force employers to meet their demands. Their tactics included trying to shut down the city’s power stations and stopping the tramcars. On Wednesday 29 January, strikers met with the Lord Provost at the City Chambers on George Square. He agreed to send a telegram expressing their case to the government in London. A large crowd of strikers accompanied their leaders; an even larger demonstration was expected to hear the response two days later. Fearing violence, Glasgow’s chief legal officer Alistair Mackenzie, the Sheriff of Lanarkshire, asked the government if military aid would be available to him, should riots break out. 5

The Sheriff’s request was reviewed in London on the 30th by the five-person War Cabinet. Churchill, though not a member, was present as Secretary of State for War and Air. Also attending were the Secretary of State for Scotland, Robert Munro, senior civilian and military officials, and other ministers. With Lloyd George away at the Paris Peace Conference, Deputy Prime Minister Andrew Bonar Law was in the chair. Law was MP for the Glasgow constituency containing George Square.

General Sir William Robertson, commanding the army, quickly reminded the War Cabinet that the government had no legal powers to send troops into a British city unless martial law was declared. Only the civil authorities could do that. He added that the army recommended the use Scottish troops, should any military be deployed. 6

Churchill made several contributions to the discussion. The first related to the difficulty of speeding up demobilisation of Glasgow policemen then still in the armed forces. Next, he advised, “we should not exaggerate the seriousness of this disturbance.” After all, the situation “had been brewing for a long time.” Although there might “have to be a conflict in order to clear the air,” the government should have ample provocation before taking strong measures. By going gently at first, they would earn the nation’s support if troops were needed. But the moment for their use had not arrived. Churchill did suggest arresting some of the strike leaders under the 1914 Defence of the Realm Act.

Churchill was against moving against the strike until some glaring excess had been committed. If events crossed the line of a wage dispute—if strikers broke the law—that would be the time to act. Sir Eric Geddes noted that troop movements might be prevented by a railway strike. Churchill replied “that the War Office would take all the necessary steps to meet such eventuality and would consider arrangements for placing troops in the vicinity of Glasgow.”

Shinwell’s 1973 misrepresentation read: “Churchill persuaded the Cabinet that troops, machine guns and tanks should be deployed in the Clydeside area.” 7 He offered no evidence, and his charge is contradicted by War Cabinet minutes. Subsequently, historians repeated variants—for example that “Churchill made a positive proposal [to use troops] which was the one adopted.” 8

The War Cabinet decided to follow its established policy and not to intervene in the strike. 9 It agreed that troops would be put on standby within the army’s Scottish Command. A subcommittee chaired by the Scottish Secretary and not including Churchill, was to take the lead for the government. A senior Scottish Office official was to be sent to Glasgow to communicate to the Lord Provost and Sheriff that:

…the lighting of the city must be kept up if there is any possibility of doing it; that the military will be in readiness to give their services when requested by the civil authorities; and that firm, but not provocative action should be taken to put down disorder and prevent intimidation.

Before noon on Friday 31 January a crowd of around 25,000 gathered outside the City Chambers. While their leaders were inside, the police with batons charged part of the crowd and a violent struggle broke out. When the police lost control of the situation, the Sheriff read the Riot Act, which required all those gathered to disperse. Then, as matters worsened, he decided to ask for military assistance. 1<0/a> The violence in the “Battle” was exclusively between rioters and the police, not the army.

By the time the War Cabinet met at 3pm, troops were already on the move from Edinburgh, Stirling and Cromarty. A single battalion of infantry was brought up from Northumberland; six tanks and 100 trucks with drivers were sent north. 11 Scottish Secretary Munro made the most panicky statement: It was “a misnomer to call the situation in Glasgow a strike—it was a Bolshevist rising.” There is no evidence that at was.

Churchill made only a brief contribution, on how quickly DORA authority could be given for arrests. The main talkers were Munro and his chief law officer, the Lord Advocate.12 While Glasgow civic authorities had indeed requested military aid, it was the army itself that would decide what forces were deployed. 13

The first of 10,000 infantry troops began to arrive around 10pm on Friday night. The six tanks arrived the following Monday, but never left the shed in which they were stored. The deployment of so large a force was almost immediately recognised as overreaction. Some have suggested, and it is my own belief, that the army, with no reliable information on which to base its plans, prepared for the worst situation it might face—a re-run of the 1916 Easter Rising in Dublin. 14

A dispassionate analysis of available evidence shows that Churchill was one of the least concerned about a “Bolshevist threat” in Glasgow 15. Indeed he expressly asked his colleagues not to exaggerate the problem. Churchill did not “roll the tanks.” Nor did he persuade the Cabinet that troops “should be deployed” or make “a positive proposal’” to send them. Not being a member of the War Cabinet, he played no role in liaison with Glasgow authorities. He merely acceded to the War Cabinet’s decision to make troops available, should the Sheriff need them. The army alone determined what it needed.

The myths of George Square, established during the last century, have completely overwhelmed the actual history. We read now that the army shot, injured or killed people; that tanks entered the Square. Some versions insist that the all the troops were English, fueling nationalist grievances. Others assert that the army came “to crush the strike” (it lasted twelve days after troops arrived). The mythology repeats uncritically on social media, in the press, on TV history programmes, in history books and in school textbooks. The prevalent myth is that “Churchill sent the tanks.” 16 Not guilty!

5 “Trial transcript from the trial of William McCartney [et al] for the crime of mobbing and rioting at George Square, Glasgow and other locations…at the High Court Edinburgh…7 April 1919.” Evidence of Sheriff A.O.M Mackenzie. National Records of Scotland, JC36/31. Barclay, “‘Duties in Aid of the Civil Power,’” 2019, 268, 277.