Churchill and Bernard Shaw: A Curious Dichotomy, a Fictitious Exchange 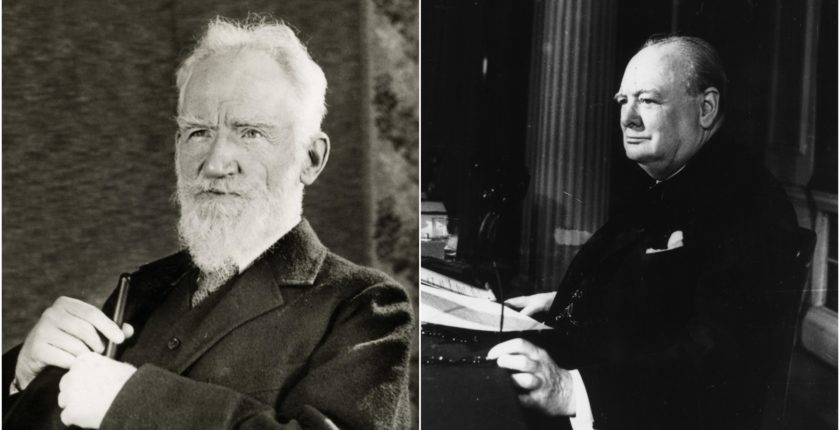 Shaw and Churchill (above), from Wikimedia Commons and the Hillsdale College Press respectively.

Winston Churchill was not a hater, with the singular exception of Hitler—“and that,” as he said, “is professional.” Churchill also loved the theatre, and ipso facto the plays of George Bernard Shaw. Notwithstanding that Shaw was a left-wing polemicist who in 1931 visited and praised Stalin’s Russia. A statesman with Churchill’s broad tolerance could laugh off Shaw’s politics while acknowledging his literary genius.

His mother introduced the young Winston to Shaw at a luncheon around 1901-02. Shaw was then about 45, Churchill 27. “I was instantly attracted by the sparkle and gaiety of his conversation,” WSC wrote later. And “by his eating only fruit and vegetables and drinking only water. I rallied him on the latter habit, asking: ‘Do you really never drink any wine at all?’ ‘I am hard enough to keep in order as it is,’ he replied.” It could have been Shaw, not Churchill’s longtime Dundee rival Ernest Scrymgoeur, who first occasioned an apocryphal wisecrack: “He has all of the virtues I despise, and none of the vices I admire.”

Shaw was as enthusiastic about the Soviet Union as Churchill was censorious. Churchill compared Lenin to a typhoid bacillus; Shaw called him “the one really interesting statesman in Europe.” In 1931, Shaw joined a party led by Nancy Astor on a well-publicized Soviet tour. Shaw returned describing Stalin as “a Georgian gentleman.” At a Moscow dinner he declared: “I have seen the ‘terrors’ and I was terribly pleased by them.”

This was too much for Churchill, who despised hypocrisy. Shaw, after all, had made a fortune in capitalist Britain. Nancy Astor’s husband was at this time raking in £3 million in tax refunds awarded by American courts. Shaw and Astor, Churchill wrote, combined “the world’s most famous intellectual Clown and Pantaloon,” and “the charming Columbine of the capitalist pantomime.” His description of their Moscow reception was classic:

It must have been with some trepidation that the chiefs of the Union of Socialist Soviet Republics [sic] awaited the arrival in their grim domains of a merry harlequinade. The Russians have always been fond of circuses and travelling shows. Since they had imprisoned, shot or starved most of their best comedians, their visitors might fill for a space a noticeable void…. Multitudes of well-drilled demonstrators were served out with their red scarves and flags. The massed bands blared. Loud cheers from sturdy proletarians rent the welkin….

Commissar Litvinoff, unmindful of the food queues in the back-streets, prepared a sumptuous banquet; and Arch-Commissar Stalin, “the man of steel,” flung open the closely guarded sanctuaries of the Kremlin and, pushing aside his morning’s budget of death warrants and lettres de cachet, received his guests with smiles of overflowing comradeship.

Shaw for his part enjoyed needling Churchill in equable spirit. In 1928 he sent WSC his magnum opus, The Intelligent Woman’s Guide to Socialism and Capitalism. Churchill reported Shaw telling him, “(subsequently and erroneously), ‘It is a sure way to prevent you reading it.’” In 1934, Shaw wrote to praise Churchill’s Marlborough as “very good reading [but] badly damaged in places by [excess] Macaulayisms.” Cutting back on Macaulay “is easily within your grasp. And forgive me for meddling; but the book interested me so much I could not keep quiet.”

During the 1936 Abdication Crisis, Shaw like Churchill stood by King Edward VIII. Opponents to the King’s marriage were from “the Kingdom of the Half Mad,” Shaw wrote. Prime Minister Baldwin,  he wrote, wanted the King to renounce Mrs. Simpson and “go a-begging through Europe for some cousin, five or six times removed, of a dethroned down-and-out Bourbon, or Hapsburg, or Hohenzollern, or Romanoff.” Churchill wrote the King: “For real wit, Bernard Shaw’s article in tonight’s Evening Standard should be read. He is joyous.”

In 1937, Churchill reprised a 1929 sketch of Shaw in Great Contemporaries, and Shaw apparently enjoyed it. (It is certainly worth the reading today—Churchill at his literary best.) Shaw liked it, but Churchill had described “The Red Flag” (Labour Party hymn) as “the burial march of a monkey.” Not so, Shaw protested. “The Red Flag” was actually “the funeral march of a fried eel.”

Though Shaw had expressed admiration for Mussolini, he was non-committal about Hitler until 1940, when France fell. Briefly he  declared the war over and proposed that Britain make peace. But after Hitler invaded Russia, Shaw supported the war effort. This was good enough for Churchill, who continued to admire Shaw’s work.

We are constantly asked to verify a famous exchange. Shaw writes: “Am reserving two tickets for you for my premiere. Come and bring a friend—if you have one.” Churchill replies: “Impossible to be present for the first performance. Will attend the second—if there is one.” Though it’s lovely repartee, both of them denied it.

According to the usually reliable Kay Halle, in her quote book Irrepressible Churchill (1966), Shaw wrote this to Churchill in 1924. In the 1970s, Finest Hour editor Dalton Newfield suggested that the play in question was Shaw’s “Saint Joan,” which premiered in 1923.

Five years ago Allen Packwood, director of the Churchill Archives Centre in Cambridge, blew the story apart. In the Churchill Papers he found a set of letters (CHUR 2/165/66,68) in which both Shaw and Churchill denied the exchange. Also, the play in question was a much later Shaw work, “Buoyant Billions” (1948).

On 15 September 1949 Derek Tatham, representing the London booksellers Alfred Wilson, wrote to Shaw: “Intend to use the following story—have you any objections?” Tatham gave a slightly different version of Churchill’s reply. He says he will attend the opening performance and give the other ticket to a friend for the second performance, “if there was one.”

An outraged Shaw scrawled on Tatham’s enclosure in his own hand: “The above is not only a flat lie but a political libel which may possibly damage me. Publish it at your peril, whether in assertion or contradiction.”

Undaunted, Tatham wrote to Churchill, saying he intended to publish the story, “together with this typical Shavianism, in facsimile,” in a new magazine devoted to books and literary topics. Did Mr. Churchill have any comment?

Churchill’s secretary, Elizabeth Gilliatt, replied emphatically on the 16th: “I am desired by Mr. Churchill…to inform you that he considers Mr. Bernard Shaw is quite right in calling the incident to which you refer ‘a flat lie.’”

We have found nothing further on Derek Tatham (H.D.S.P. Tatham) except a gazette note on a company bearing his name in 1951. There is no evidence of the literary magazine he planned ever being published. There is no other contemporary appearance of the Shaw-Churchill exchange. This has not prevented it from being widely circulasted for years. A Google search for the exact phrase, “bring a friend, if you have one” nets 77,000 hits. We have not however searched all 77,000…