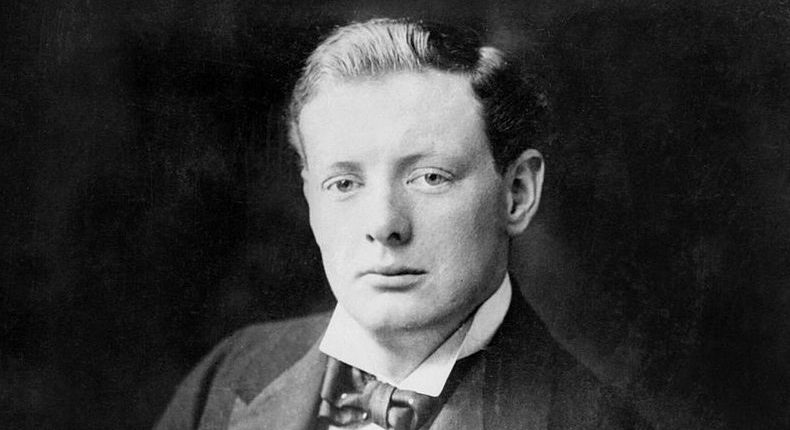 Young Winston at the time of his first lecture tour.

Before Winston Churchill returned home from South Africa in July 1900, he made two decisions: to run again for Oldham, Lancashire, and to embark on a lecture tour in Britain. He was by now a national celebrity, having escaped from a Boer prison and made his way to freedom over 300 miles of enemy territory. With the usual Churchill luck, one of the Englishmen who helped him escape was a miner from Oldham named Dewsnap. “They’ll all vote for you next time,” Dewsnap told the fugitive.

Lecture offers started arriving while Churchill was still in South Africa. The first was from Major J.B. Pond, an American agent, in March 1900. English offers followed. His South Africa exploits gave a ready subject: “The War as I Saw It.” Of course, speaking was only a temporary activity, to earn money for his political career, for Members of Parliament were not salaried until 1911. This became crucial after Churchill, as predicted, was elected MP for Oldham on 1 October 1900.

While he needed the money, Churchill had qualms about being a paid speaker. “…you must remember how much money means to me and how much I need it for political expense and other purposes,” he wrote his mother. “And if I can make three thousand pounds (£150,000 in today’s money) by giving a score of lectures in the big towns throughout England on the purely military aspect of the war, it is very hard for me to refuse, but I should like you to ask Mr. Balfour and Mr. Chamberlain what they may think of such a course and whether it would likely weaken my political position if I appeared as a paid lecturer on public platforms in this connection.”1 Balfour and Chamberlain were respectively Leader of the House of Commons and Colonial Secretary.

The Conservative leaders assured Lady Randolph of their support. In July her son arranged for a lecture tour through a UK agent, Gerald Christie, whom he continued to use for many decades. Christie’s The Lecture Agency, Ltd. in London arranged thirty appearances throughout Britain from 26 October to 30 November 1900.2 Although now an elected Member of the House of Commons, Churchill had plenty of time. He did not take his seat until 14 February 1901.

The tour was without respite in the last half of November: Sheffield, Eastbourne, Brighton, Windsor, Leighton [Buzzard], Bristol, Liverpool, Manchester, Harrogate, Belfast, Dublin, Bath, Cardiff and Cheltenham. Oldham, Churchill’s new constituency, was scheduled but cancelled. Given travel times in those days, it was a hectic program. But Churchill was young and eager, if not entirely confident.

His first appearance was at his old school, Harrow, on Friday, 26 October 1900. Churchill was concerned. “This is my first attempt to lecture, and I fear it will not be a great success,” he wrote to his former schoolmaster Henry Davidson.3 Churchill worked hard for a successful outcome. Although there is no copy of the original talk in the Harrow archives or in the Churchill Archives Centre at Cambridge, the speech was reported in The Harrovian, the school newspaper:

Mr. Winston Churchill gave a most interesting lecture in the Speech room on his experiences in the South Africa War. Received with loud applause, Churchill gave his detailed and exciting account of the armoured train at Chievely, and his imprisonment and escape from the State Model Schools in Pretoria.4

Churchill was careful to disguise the names of those who aided his escape from the Boers. He would explain that he sought assistance at “a small settlement near a coal-mine.” Selecting one house at random, he was fortunate to find that the owner, a “Mr. Harrison,” was British. The name Harrison was used to avoid reprisals against John Howard, one of the Englishmen who helped him escape. Not until his 1930 autobiography, My Early Life, did Churchill disclose Howard’s real name, that of the Transvaal Collieries, and two miners who visited him in his hiding place. (Campaigning in Oldham in the film “Young Winston,” Churchill acknowledges Dewsnap’s wife in the audience, but this is a scriptwriter’s fiction.)

His first lecture turned out better than he expected. Harrow Head Master Dr. Joseph Wood thanked Churchill and “the School gave three hearty cheers for their old schoolfellow.” The Harrovian concluded: “Mr. Churchill accomplished a difficult task with great taste, for he gave a most interesting account of his adventures without magnifying their importance in proportion to the rest of the war.”5

Churchill was paid £27 (£1350 today).6 The lecture provided valuable experience, he wrote his mother the next day. It was a success, he said, but it “requires condensation. I only got a ¼ through my notes in an hour and a half.”7 Churchill made revisions to his script before his next talk at St. James’s Hall in London on 30 October.

During his lectures, Churchill used “magic lantern” slides to display photographs. Among them was the armoured train the Boers attacked at Chieveley, defended by thin steel plates which could not withstand shelling. He also pictured the States Model Schools, where he and other prisoners were held, and the guns of Ladysmith.

Another photograph was of the “Dog Man,” which Churchill obtained from George Patterson of Newcastle.8 Lieutenant H. Franklin of the Royal Dublin Fusiliers, Churchill’s fellow prisoner in Pretoria, explained: “When we first came here an Englishman named Patterson, employed in the Government telegraph office, used to pass by the railings and whisper the news. He only used to come when there was good news to tell, and generally ended with the words, ‘Hurrah, hurrah!’ Since he was always accompanied on these occasions by a large St. Bernard, we called him the Dog Man.”9

Introduced by “the Good and the Great”

Churchill believed a notable person presiding at a lecture was vital for success. Certainly a well-known eminence would add to his stature and attract attendance. He issued many invitations. For an October 30th lecture at St. James’s Hall, he invited Lord Wolseley, Commander-in-Chief of the Forces.10 Churchill was extremely pleased with Wolseley’s acceptance. At Birmingham he invited the city’s favorite son, Joseph Chamberlain, who could not attend because of a holiday conflict. 11 Lord Dudley presided instead. In Dublin, Churchill invited Lord Ashbourne, the Irish Lord Chancellor, who responded fulsomely:

I received your letter and assure you that it will be a great pleasure to me to preside at your Dublin lecture, which I expect will be a great success. All your father’s old friends are going with a resolute of being pleased and to cheer you throughout. Your own name stands high here. Lady Ashbourne and I will be very pleased if you stay with us during your visit to Dublin….12

Following the address at Harrow, The Times reported on Churchill’s lecture on 30 October 1900 at St. James’s Hall. Supporting him were Lord Wolseley, who occupied the chair, the Duke of Marlborough and Mr. and Mrs. George Cornwallis-West (his mother and her new husband). The large audience “augurs well for the success of his latest enterprise,” reported The Times. “…it says not a little for his qualities as lecturer that for an hour and a half he was able to hold fast the attention of everyone in that very spacious auditorium.”13

Churchill netted £265 from that lecture, considerably more than from Harrow, and the same amount from another appearance at St. James’s Hall on November 5th. During the other twenty-seven lectures, Churchill only once exceeded the take at the St. James’s Hall presentations. That was at Liverpool on 22 November, where he netted £273.

Other eminent chairmen included Lord Rosebery in Edinburgh, the Marquess of Dufferin and Ava in Belfast, and Lord Derby in Liverpool. Lord Soames, Sir Winston’s son-in-law, had an amusing recollection of the Liverpool speech. Churchill, he recalled,

went to address an enormous gathering at the Corn Exchange. He stayed with Eddie Derby, and they rode in a carriage together the few miles into Liverpool. Now Winston was very quiet, as nearly everyone is when they are brooding and have a speech awaiting. Lord Derby, over twice Winston’s age, turned to him and said, “Are you nervous, Winston?” “Am I? Hell, I’m nervous as anything, I sure am,” Winston replied.

“Let me give you a tip,” said Lord Derby. “When I get up to make a speech, I look around the hall and I say to myself: ‘I’ve never in my life seen, gathered together in one room, so many bloody awful looking people!’ And then I go right off!”14

Encouraged by his UK success, Churchill left on 1 December 1900 for North America and another series of speeches arranged by Major Pond. But American newspapers covering his British appearances had widely different reviews. Horace Townsend of the Philadelphia Record wrote:

Winston Churchill is greatly disappointing those who thought that, despite his youthful failings and his egotistic cock-sureness, he would yet evince enough vigor and originality to turn his South African experience to advantage by revealing the weak points of the British Military System…. However, his only ambition seems to abuse his rival correspondents, in which diversion he was assisted last night in Birmingham by Lord Dudley.17

The Boston Herald was more favorable: “When the lecturer arose, there was absolute silence in the great hall. He spoke well and forcibly, as you will admit when you hear him deliver the same lecture ere long in the United States.”18

He reached New York on 8 December, where he was first introduced by Mark Twain. Ultimately, Churchill was disappointed in his earnings, and extremely displeased with his agent Pond. Once, he wrote his mother, “I arrived to lecture in an American town & found Pond had not arranged any public lecture, but that I was hired out for £40 to perform at an evening party in a private house-like a conjuror.” Several times he had spoken in local theatres to “almost empty benches.”19

By comparison with Britain, his overseas tour was unrewarding. In two months’ work, Churchill cleared just over £1,600 (£80,000 today). This was only about 40% of what he had made in half the time in Britain. “I have got to hate the tour very much indeed,” he wrote his mother in January, “and if it were much longer I do not think I would be able to go through with it.”20

Overall, however, he was pleased with his debut on the lecture circuit. “I am v[er]y proud,” he wrote, “of the fact there is not one person in a million who at my age could have earned £10,000 without any capital in less than two years.”21

Churchill handed over his earnings to be invested by the family friend and financier, Sir Ernest Cassel. His financial accomplishments at age 26 were indeed extraordinary. But his British lectures in October-November 1900 were mainly responsible for his success.

1 Randolph S. Churchill, Winston S. Churchill, Volume 1, Youth 1874-1900 (Hillsdale, Mich.: Hillsdale College Press, 2006), 541. Note: Churchill told his mother that he would only have considered Pond’s earlier lecture offer if he guaranteed a fee of least a thousand pounds a month for three months.