Current Contentions: Churchill in the Digital Age of Fable and Myth 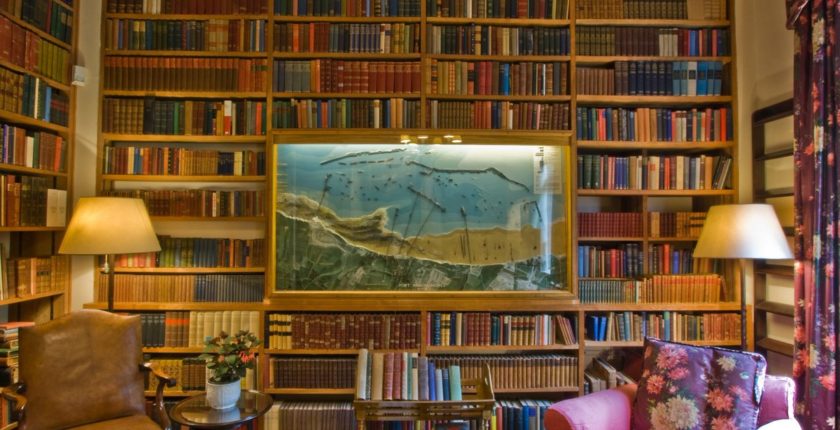 Model of the Gold Beach Mulberry harbor in the library at Chartwell. Far from opposing D-Day, Churchill had advocated the reinvasion of France since 1940. Anxious to prepare, he proposed the Mulberries, which he first thought of in 1917: floating piers. “They must float up and down with the tide,” he directed. “Let me have the best solution worked out. Don’t argue the matter. The difficulties will argue for themselves.” (National Trust, Chartwell)

“Churchill Contentions: The Age of Fable and Myth” was a lecture aboard the Regent Seven Seas Explorer on the 2019 Hillsdale College Cruise around Britain, 4 June 2019.  To play this audio resource, please click here.

There is sufficient myth and fable surrounding Winston Churchill to fill a book, and so I wrote one. Winston Churchill, Myth and Reality exposes the most popular tall tales, exaggerations, lies, myths, rumors and distortions about him over the years. Nowadays, the old adage that you don’t speak ill of the dead is obsolete. It’s more important to revise history: old-fashioned concepts like heroes.

Today’s main tool is the Internet, particularly social media. Now, without straying from your keyboard, you can anonymously spout whatever nonsense that occurs to you. The Italian philosopher Umberto Eco nicely described this phenomenon: “Social media gives legions of idiots the right to speak when they once only spoke at a bar after a glass of wine, without harming the community….It’s the invasion of the idiots.”

Churchill, who won a Nobel Prize, and did a few other things, cannot reply. He lies at Bladon in English earth, “which in his finest hour he held inviolate.” He’d love the controversy he stirs, on media he foresaw but never encountered. He once said the vision “of middle-aged gentlemen who are my political opponents being in a state of uproar and fury is really quite exhilarating to me.”

My book has thirty-seven chapters. Four were chosen which closely related to the places we passed or visited on the Hillsdale Round-Britain cruise.

We sailed opposite Normandy just after leaving port. Big party going on over there—it was the 75th Anniversary. Churchill, of course, was vital to D-Day. Yet he is routinely accused of resisting it—and has been for a long time.

In reality, Churchill began demanding plans for “a lodgment on the continent” before the Russians or Americans were in the war. As early as June 1940, a few weeks after Dunkirk, he was asking about a return landing on French beaches. In 1941, after Hitler invaded Russia and Japan attacked in the Pacific, clamor grew for a so-called Second Front. But in March 1942 the Americans said they couldn’t provide more 130,000 troops in the near future.

Churchill steadfastly supported an invasion of Europe when success had a decent chance. Given all this, it was astonishing to read in 2016 the same old accusations. On 12-13 August 1943, Churchill was with Roosevelt at Hyde Park. There, according to Commander-in-Chief, by Nigel Hamilton, Roosevelt threatened to withhold U.S. atom bomb secrets from Britain unless Churchill supported invading France in 1944. According to Hamilton, Churchill was so outraged that he woke up in the night ‘unable to sleep and hardly able to breathe.’”

Churchill’s remark had nothing to do with FDR. “It was so hot,” Churchill wrote, “that I got up one night because I was unable to sleep and hardly to breathe, and went outside to sit on a bluff overlooking the Hudson River.” Thus Hamilton’s thesis collapses on its face—another myth with no basis in reality.

This discussion focuses on how Churchill challenged the assumption that Normandy was the only way to wear down the enemy. He certainly opposed side-shows, like invading the South of France. We offer evidence that he worked tirelessly to ensure its success.

Our cruise passed many places associated with Churchill and the First World War. We left from Southampton. There, 105 years ago, Churchill, as First Lord of the Admiralty sent the fleet to its war station at Scapa Flow in the north of Scotland, which we sailed past. Under cover of darkness, he sent the ships up the English Channel, so that Britain’s east coast was never unprotected,

We also passed Overstand, Norfolk, where the Churchill family holidayed in July 1914, until Winston was urgently summoned to London. We sailed by Whitby, Hartlepool and Scarborough, shelled by the German High Seas Fleet in December. Churchill dispatched Admiral Beatty’s squadron, and the Germans fled for home. Next Edinburgh, on the Firth of Forth. That’s where in 1919 the same Admiral Beatty stood on his bridge, watching the proud German High Seas Fleet sail in to surrender.

Alas, the First World War is grist for many Churchill Myths. On 4 August 1914, with Britain about to declare war, Prime Minister H.H Asquith wrote of “Winston, who has got on all his war-paint.” True, Churchill wished ardently to fight and win wars, once they were declared. But the critics never reveal how hard he strove for peace. Alone among his colleagues, he offered concrete proposals to stop the war before it broke out. One was a “naval holiday” in warship production by Britain and Germany. Another was a last-minute conference between all Europe’s heads of state. This talk explores those in detail.

Our cruise visited Belfast, where some saw where the Titanic was built. Our guide was quite marvelous. Belfast folk, she told us, have a popular saying. “She was fine when she left here…..English captain, Yanks in a hurry, Canadian iceberg.”

Did you know that Winston Churchill sank the Titanic? Yes, ladies and gentlemen, young Winston was President of the Board of Trade, overseer of shipbuilding, when RMS Titanic was built. The buck stops at his desk. At least that is the spin in Who Sank the Titanic?, a 2012 book by British investigative journalist Robert Strange.

I guess you also know that Churchill sank the Lusitania? His idea here was to get America into the war. So he purposely steered the ship, carrying 128 Americans, into U-boat infested waters. Makes no difference that he was in Paris at the time. He laid the trap and baited the hook.

The real cause was Lusitania’s Captain Turner’s decision, after sighting the Irish coast, (as we will soon) to slow down in order to “make the tide” at Merseyside, as he would have done in peacetime. At his normal cruising speed, chances of a successful torpedo attack were slim. Alternatively, since he had the time, he could have headed out to deeper waters, maintaining 25 knots, which U-boats couldn’t match. There was no advantage and every danger in slowing down. (Conversely for Titanic, the chief cause was not slowing down.)

And again, ladies and gentlemen, although we saialed near the Old Head of Kinsale, where U-20 let fly her torpedoes, and the Lusitania went down. Good news, however! Our Captain says there are no German U-boats anywhere in the area.

On Monday 10 June we visited Dublin, where Winston Churchill had his first childhood memories, and on Tuesday in Waterford. Now you may be going to Waterford for the crystal, but I’m hoping to see where John Redmond was sworn in. Redmond represented Waterford for the Irish Parliamentary Party for nearly 30 years. In Irish Home Rule debate, Redmond, like Churchill, favored moderation, conciliation and Irish autonomy. Many years later in the Commons, Churchill praised Redmond’s “speeches of absolute support and unity with this country until everybody said everywhere ‘The brightest spot in the world is Ireland.’”

In Ireland, Churchill was always seeking to placate old antagonisms among Catholics and Protestants. Along the way he made a mistake—supporting the Black and Tans in their repressive measures in the country. Against that, he must be credited with a leading role in forging Ireland’s independence.

In early 1912 Churchill and Redmond defended Home Rule in Belfast, where we visited. Unperturbed by unionist protestors pelting his car with missiles, he promised 7000 Ulster folk Home Rule with protection for minorities and fiscal oversight.

Think of the courage Churchill displayed. He could have played to their sentiments, as his father had. Indifferent to danger, he was cut from a different cloth. He always told people not what they wanted to hear, but what he thought they should hear.

After the First World War, Churchill again took up Irish affairs, and played a key part in crafting the Anglo-Irish Treaty, which this discussion later explores…