Joys of The Churchill Documents: Dewey and Hoover, 1950 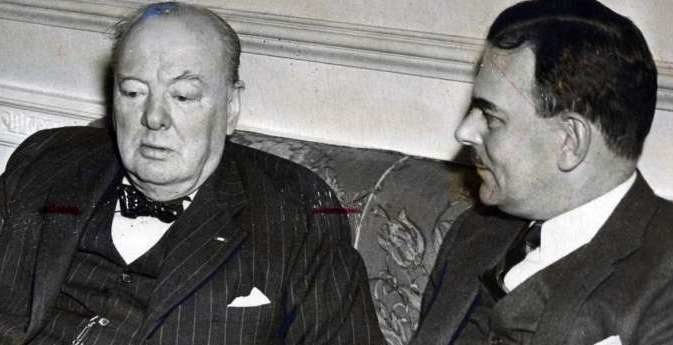 A great joy of reading The Churchill Documents is their trove of historical sidelights. Volume 22 (August 1945—September 1951, due late 2018) covers the early Cold War: the “Iron Curtain,” Marshall Plan, Berlin Airlift and Korean War. It reminds us of the political battles swirling around the Anglo-American “special relationship.” Of course the issues seem very clear in hindsight. Seven decades ago, the future was unknowable. Consider Governor Dewey and the question of America’s commitment.

I have hesitated for a long time about burdening you with this [but] I am taking the liberty of imposing upon you…. Mr. Hoover made a speech night before last, the implications of which are appalling to me. The press reports today it has had wide and unhappy repercussions in Great Britain and on the Continent.

I am still not quite sure why I ran again [for president in 1948] but in any event, having no ambitions or expectations of having any other office I am free to proselyte to the limit of my capacity for the point of view expressed in my speech and intend to do so.

If you find any spot on the horizon more cheerful than I do, I should appreciate hearing of it. The world is filled with gloom and almost in extremis.1

On why he ran again, one suspects that few at the time would rush to gainsay him. But the surprise was to find Dewey, a former Republican nominee, taking issue with a scion of his party.

We asked Professor George Nash, Hoover’s biographer, what Dewey was referring to. Dr. Nash referred us to Hoover’s broadcast of 20 December 1950, the text of which he sent. He also helped us compose a footnote to Dewey’s note to Churchill:

On December 20, Hoover gave a speech to advocate a Western-hemisphere-oriented “Gibraltar” geopolitical strategy, a buildup of American air and naval forces, but not of its army, focused on defending the Western Hemisphere and the free island nations on the Pacific and Atlantic rims, like Taiwan and the UK “if she wishes to cooperate.” Hoover would also refuse to send “another man or dollar” to continental Europe for its defense until​ the non-​communist nations there strengthened their own military forces. His advice (denounced by his critics as isolationist) differed from President Truman’s plan, announced just the day before, to send more U.S. troops to western Europe to assist in NATO’s defense preparations.2

As World War II had wound down, America’s attitude toward the postwar defense of Europe was a major concern of Churchill’s. The Churchill Documents contain many examples of this. At Yalta in February 1945, discussing the French zone of occupation in Germany, a prickly interchange ensued:

The Prime Minister said that the position of France became of very great importance in view of the President’s statement on the previous day about the withdrawal of United States forces from Europe two years after the end of the war. Great Britain was not strong enough to do her part in the west against Germany “unless there was a strong French Army.” … The President [Roosevelt] said that he wanted to make it clear that in present conditions public opinion in the United States was decisive.3

Churchill’s worries continued after Roosevelt’s death. What would be the attitude of the new president? Germany surrendered on 8 May. Four days later Churchill wrote Truman, asking for a “standstill order” on the movements of U.S. forces “at any rate for a few weeks.” Truman replied, “I must not have any avoidable interference with the redeployment of American forces to the Pacific.”4

Churchill’s concerns mounted when the Labour Party ousted him as prime minister following the July 1945 general election. Labour was focused on a domestic agenda. The nightmare vision of the 1930s rose again. As Churchill had written of a dark moment in 1939:“Would America ever come in again? … Somehow the light faded out of the landscape.”5

To Churchill’s relief, Truman adopted a robust attitude toward Soviet aggression. The President tacitly (though not publicly) approved of Churchill’s forceful 1946 message about the Iron Curtin. He responded vigorously to communist challenges in Greece and Turkey. When the Russians seemed to hesitate in withdrawing troops from Iran, Truman sent a naval task force led by the battleship Missouri into Sea of Marmara.6

In 1948, Stalin threatened to cut off Allied access to Berlin. Truman and Prime Minister Attlee defied him with the Berlin Airlift. In the House of Commons, a jubilant Churchill congratulated Labour with gusto.7 He even hoped for “some great common bond of union, like we had in 1940, to lead to that melting of hearts where sacrifice seems to be an indulgence and pain becomes a joy, and when life rises to its highest level because death has no terrors.”8 It was typical of Churchill’s lifelong preference for coalitions at times of crisis.

It is important to understand that Hoover’s proposals were not for isolation. With two exceptions, they mirrored Churchill’s. Like Churchill at Fulton, Hoover wanted America armed to the teeth, able to repulse any challenge from what Churchill had called “the Soviet sphere.” Like Churchill, he voiced “the need to preserve Western Civilization on the Continent of Europe [and] our cultural and religious ties to it.”9

They diverged in two critical areas. The first was the atomic bomb, which the Soviets had by then acquired. The bomb, Hoover said, was “a far less dominant weapon than it was once thought to be.”10 Churchill differed profoundly. “It may well be,” he had declared in 1946, “that in a few years this awful agency of destruction will be widespread, and the catastrophe following from its use by several warring nations will not only bring to an end all that we call civilization but may possibly disintegrate the globe itself.”11

Secondly, Hoover balked at helping a Europe that refused to help itself. “The test is whether they have the spiritual force, the will, and acceptance of unity among them by their own volition. America cannot create their spiritual forces; we cannot buy them with money.” But there was no hard currency in Europe except the Swiss franc. Churchill was doing his best to create unity of purpose and collaboration, but this view of Hoover was anathema to him. The situation, he thought, was desperate. With the best spiritual will and unity, he declared again and again in those years, Europe could not defend itself. It was America’s obligation to do everything to help.

Otherwise, however, the Hoover and Churchill theses run parallel. Hoover like Churchill favored peace through strength. He advocated a joint naval and air strategy, a unity of minds between the United States and the British Empire and Commonwealth. That is what Churchill had worked for most of his life.

Churchill’s reply to Dewey was brief: “It is a comfort to me that you felt Hoover’s speech was ‘appalling.’ I think that your own declarations are of far more consequence.”12 After all, Hoover by 1950 was a busted flush. Truman’s vigorous policy of global defense had reassured Churchill that America would not retreat from world leadership—as he had repeatedly warned Americans they could not do. But two years later Eisenhower was elected. And the old doubts rose again.

Oddly or ironically, Dewey himself now proposed a defense posture very much like Hoover’s. They met in New York in January 1953, shortly before Eisenhower took office. After a dinner hosted by Bernard Baruch, they were joined by John Foster Dulles. The latter was about to become Eisenhower’s Secretary of State.

The details of that meeting will appear in the final volume 23 of The Churchill Documents. We already know much of it from the Churchill biographic volume. On 7 January Churchill cabled his Foreign Minister Anthony Eden and Chancellor of the Exchequer R.A. Butler:

Dewey proposed a scheme for a Pacific Treaty between all Pacific powers including the Philippines, Formosa, and the like, excluding (repeat excluding) Great Britain. I said I would denounce such a plan scathingly. Dulles then gave a long account of the negotiations leading up to the Anzus Treaty, and how the Labour Government had made no objection to it at all. I explained our point of view. Dewey, who is thoroughly friendly, then said that if I objected so strongly, he would let his baby, i.e. the Pacific Treaty, die. In fact I could consider it dead. On the spur of the moment he said that an alternative plan might be for the United Kingdom and the United States to make a joint declaration (comparable to our guarantee to Poland in 1939) that if Communist China attempted to occupy Indo-China, Burma or any other countries in the Pacific Area, we and the Americans would declare war.13

“Great Slab of a Face”

Dulles had declared, without prevarication, that he thought it would be “most unfortunate for Churchill to return to Washington in February.” He explained that the American public thought Winston could cast a spell on all American statesmen and that if he were directly associated with the economic talks, the fears of the people and of Congress would be aroused to such an extent that the success of the talks would be endangered.

Winston took this very reasonable statement ill, but Christopher and I both took pains to assure Dulles afterwards that we thought he was absolutely right. Irritated by this, Winston let fly at Dewey after dinner and worked himself into a fury over certain Pacific Ocean questions. Christopher and I again applied soft soap subsequently. We told Dewey that a sharp debate was the PM’s idea of a pleasant evening and assured him that he would only have spoken thus to a man whom he trusted and looked upon as a friend.

But, alas, this was not so. Winston was really worked up and, as he went to bed, said some very harsh things about the Republican Party in general and Dulles in particular, which Christopher and I thought both unjust and dangerous. He said he would have no more to do with Dulles whose “great slab of a face” he disliked and distrusted.14

So it was that Thomas Dewey reversed himself. From the “appalling implications” he saw in Hoover’s broadcast in 1950, Dewey had proposed much of what Hoover had proposed: a Pacific-based defensive strategy. Churchill’s views on that remained consistent. He went away with grave doubts about Foster Dulles, who would confirm his misgivings by his attitude toward a Soviet summit at the Bermuda Conference with Eisenhower the following December.

“I tell you all this,” Churchill concluded in his cable to Eden and Butler, “to show you the rough weather that may well lie ahead in dealing with the Republican Party who have been twenty years out of office; and I feel very sure we should not expect early favourable results. Much patience will be needed.”15

And that indeed is another story—one that The Churchill Documents 1951-1965 shall relate.