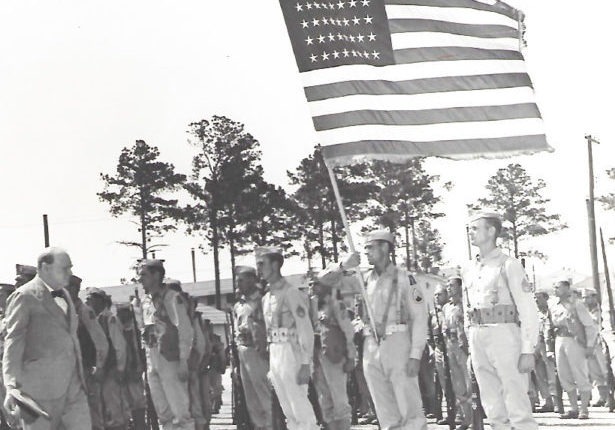 There are photos…and then there are photos that stir the heart. Churchill inspecting American troops at a grim time for the Anglo-American allies, Fort Jackson, South Carolina on 23 June 1942. (Photo Collection of Eugene B. and Kathleen L. Sloan)

The Hillsdale College Churchill Project is privileged to receive photos and memorabilia that add to our Churchill collection. Laura Crosby of Summerville, South Carolina, sent us the historic photos shown here, from the collection of her parents, Eugene and Kathleen Sloan. They round out our picture of Churchill’s June 1942 visit to America, and his first encounter with U.S. troops at Fort Jackson, South Carolina.

Author and photographer Eugene Sloan (1922-1969) was a federal court reporter for The State newspaper in Columbia, South Carolina. His photos of the Jocassee Valley are historic treasures since the area is now covered by Lake Jocassee, a reservoir created in 1973. Kathleen Lewis Sloan (1915-1997) spent her wartime years as editor of the Oliver General Hospital’s Beacon, and was later an editor for the University of South Carolina Press. Throughout his career, Eugene Sloan contributed to the The New York Times and Washington Post. His daughter Laura still has his reel tapes of Martin Luther King, Jr., addressing a Charleston audience in 1967. Though the main Sloan Collection is with the University of South Carolina, his daughter thought his Churchill photos belonged at Hillsdale, where they join an expanding archive led by the Sir Martin Gilbert Papers.

Winston Churchill was in Washington scarcely two weeks after Pearl Harbor. With a side trip to Ottawa, he remained there planning war strategy with Roosevelt until 14 January. Five months later he was back, visiting Washington and Hyde Park, planning for the invasion of North Africa. It was in Washington on June 21st where he and Roosevelt learned of the fall of Tobruk to Rommel’s Afrika Korps. This occasioned a famous reaction by FDR, who asked the Prime Minister: “How can we help?”

Troubled by the news from Tobruk, Churchill started for South Carolina on the evening of June 22nd, arriving at Fort Jackson the next morning. As he recalls in The Hinge of Fate, “the train drew up, not at a station, but in the open plain. It was a very hot day, and we got out of the train straight on to the parade ground, which recalled the plains of India in the hot weather.” He stood bareheaded “as the band played the National Anthem.” Which anthem is unclear from the U.S. Army photo caption! Perhaps they played both.

Will They Handle the Enemy?

From the shade of an awning, joined by FDR’s Chief of Staff General George Marshall and Secretary of War Henry Stimson, Churchill observed a march-past of American armor and infantry. This was followed by parachute exercises. “They were impressive and convincing,” Churchill wrote. “I had never seen a thousand men leap into the air at once. I was given a ‘walkie-talkie’ to carry. This was the first time I had ever handled such a convenience. In the afternoon we saw the mass-produced American divisions doing field exercises with live ammunition.”

Toward the end of events, Churchill turned quietly to his own Chief of Staff General Sir Hastings Ismay. “What do you think of it?” Ismay’s reply was blunt: “To put these troops against German troops would be murder.”

Ismay was right to speak his mind. America was barely in the war, still woefully unready for ground combat. U.S. commanders at lower levels had little or no combat experience. Without the assistance of experienced allied combat officers, their preparations relied on what one source described as “formulaic training methods emphasizing static defense and orderly large-scale advances by motorized convoys over improved roads.” Early deployments against the Afrika Korps in the invasion of North Africa produced serious losses, notably at Kasserine Pass. “Even as late as 1944, U.S. soldiers undergoing stateside training in preparation for deployment against German forces in Europe were not being trained in combat procedures and tactics in use there.”

But Churchill preferred to take the longer, more optimistic and ultimately correct view. “You’re wrong,” he told Ismay. “They are wonderful material and will learn very quickly.” Nevertheless, he impressed his American hosts with the maxim: “It takes two years or more to make a soldier.” Two years later,” he wrote in his memoirs, “the troops we saw in Carolina bore themselves like veterans.”

U.S. Troops in the Balance

Churchill was anxious that the readers of his war memoirs appreciate his prediction in South Carolina. Thus he included in The Hinge of Fate with his remarks to assembled chiefs of the U.S. Army, Navy and Air Force, at the Pentagon in 1946:

I greatly admired the manner in which the American Army was formed. I think it was a prodigy of organisation, of improvisation. There have been many occasions when a powerful State has wished to raise great armies, and with money and time and discipline and loyalty that can be accomplished. Nevertheless the rate at which the small American Army of only a few hundred thousand men, not long before the war, created the mighty force of millions of soldiers is a wonder in military history.

I was here two or three years ago, and visited with General Marshall all Army Corps being trained in South Carolina, and we saw there the spectacle of what you may call the mass production of divisions. In great and rapid rotation they were formed, and moved on to further stages of their perfection. I saw the creation of this mighty force—this mighty Army, victorious in every theatre against the enemy in so short a time and from such a very small parent stock. This is an achievement which the soldiers of every other country will always study with admiration and with envy.

We are indebted to the Sloan photographs for reminding us of two American heroes present on that day in South Carolina. Each saw service in both World Wars.

Saluting with Churchill during arrival ceremonies is General Robert Lawrence Eichelberger (1886-1961). In 1918, he won the Distinguished Service Cross for repeated acts of bravery with the American Expeditionary Force in Siberia. After commanding I Corps from June through August 1942, he was sent to the Southwest Pacific. There he commanded American and Australian troops in several decisive victories. Later, as commander of the new Eighth Army, he led the invasion of the southwest Philippines, clearing the enemy from six major Philippine islands. His final assignment, through 1948, was as part of the occupation of Japan.

Depicted inspecting the equipment of troops with Churchill and Stimson is General William Hood Simpson (1888-1980). One of America’s most distinguished soldiers, his career dated from the Spanish-American War, to commanding the 30th Infantry Division on the Western Front in World War I, to commanding the U.S. Ninth Army during the final stages of World War II.