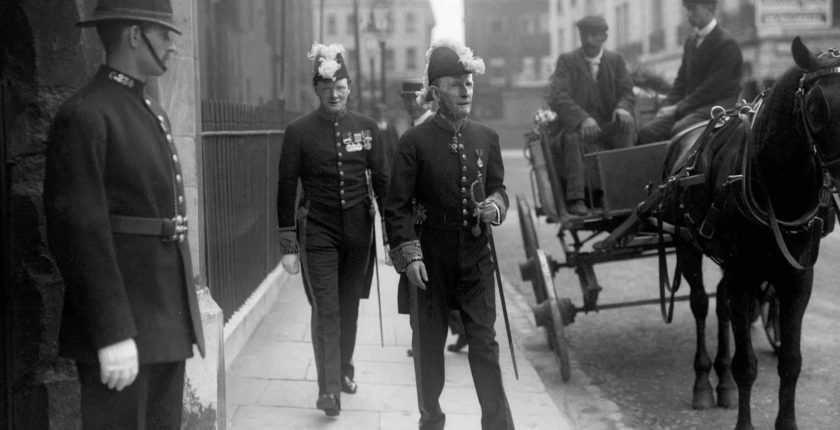 Above: Churchill with John Morley in court dress, 1908. Morley might have kept Churchill on the original Liberal path, Hill writes. But Campbell-Bannerman rejected Morley for the Exchequer, and Asquith appointed Lloyd George, whose plans were thwarted by landed interests. In 1914 Morley resigned over going to war on the side of Russia, ending his influence over the Liberal government. 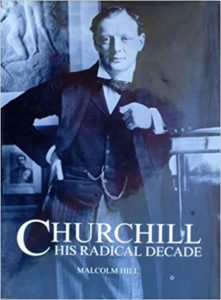 In 1906 Winston Churchill and his fellow Liberals swept into power with what they saw as a reform mandate. The new prime minister, Sir Henry Campbell-Bannerman, held it the government’s responsibility to create what Churchill called “a Minimum Standard.” Below it, no citizen should be allowed to fall. While not nearly as comprehensive as Roosevelt’s “New Deal” two decades later, Churchill’s Liberals began to create a welfare state, and might have extended it had World War I not intervened.

Aside from Martin Gilbert’s official biography and Paul Addison’s Churchill on the Home Front, this phase of Churchill’s career has been little considered. Malcolm Hill attempted to right the balance. Hill tracks Churchill from his arrival in the Commons in 1901 through the Parliament Act 1911. His final chapter describes how the classical Liberal reforms slipped away, following crippling elections and the First World War. “Churchill’s love of the bright lights and ambition,” Hill concludes, “allowed the question to fade in his political thinking.”

The “radical decade” began when Churchill quit the Conservatives for the Liberals in 1904. After the Liberal landslide of 1906, he became a junior minister under Campbell-Bannerman, with whom he shared an understanding of the actual causes of poverty. “Churchill did not believe the state should take responsibility by taxation for retirement, education, health and welfare,” Hill states. But he showed “unusual stature” in his efforts to mitigate poverty.

Churchill was attracted to John Morley, a leading party thinker. Morley in turn admired Turgot, controleur general of France in 1774-76, a “statesman of the Enlightenment, who projected the idea of a just society when agriculture engaged most people.” Another Liberal, Charles Trevelyan (brother of the historian G.M.) introduced Churchill to the works of U.S. economist Henry George, a great influence on young Winston.

Hill has written biographies of both Turgot and George. He believes that their concept of community land value taxation was the key to eliminating poverty. “Communities created land value as a natural fund for taxation,” Hill writes. Turgot and George believed all man-made things should be exempt from taxation.” During settlement of the American West, all went well “as long as settlers would work on free land. Earnings rose to what a man or woman could earn by themselves on their own land. But once land was fully enclosed…new arrivals had to seek work in competition with each other from landlords. Earnings fell to the least that a man would accept and that depended on the state of competition between those seeking work. A pool of unemployed dragged the level of earnings to the minimum that an unemployed man would demand.”

Hill on the End of Liberal Reform

The premature death in 1908 of the Sir Henry Campbell-Bannerman altered the course of reform policy. Campbell-Bannerman’s successor, H.H. Asquith, “had no creative political imagination,” Hill writes. He allowed David Lloyd George, “a dazzling performer,” to formulate domestic policy. Winston Churchill was his “admiring lieutenant.” Once Churchill attached himself to Lloyd George, true reform was “lost to political expediency.” Lloyd George had no political principles, writes Hill. His landed colleagues persuaded him to abandon Georgist ideas of land value taxation.

Instead Lloyd George devised “popular schemes for national insurance against unemployment and sickness, labour exchanges, schemes against ‘sweated labour’ and the like, without thought of the reason why the great majority of society found themselves in such a condition of poverty…. The people may go about with state spectacles and state dentures, but they may be made unemployed by the taxation required to pay for these things. Whereas the individual can take steps to remedy poor eyesight and poor teeth, he cannot overcome the condition of poverty himself.”

The Great War ended, Hill concludes, but “political thought has not recovered its prewar scale. The people have become more heavily oppressed and government has become increasingly powerful, but impotent.” Yet Hill considers Churchill as great a statesman in peace as he was in war: “His first decade in Parliament was his finest in peacetime.”

Hill says the question Churchill asked still remains: “What is the general cause in society of poverty among able-bodied persons? That alone contains as large a question in peacetime as survival does in war. Why should such a noble creature as man live under injustice when not at war?” Churchill recognized the truth, Hill asserts. His
1908 statements on taxation “merit inscription in gold lettering wherever we deliberate state expenditure”:

…all taxation is an evil, and so far as taxation itself is concerned as a mere process of raising money, it is an evil “harsh, unmingled, and unmitigated.” When the State takes from the earnings of the community money which it needs for national purposes, however vital, withdraws that money from the healthy fructification of industry, it diminishes the consuming and productive energies of the people, and it rests with the State to prove at every moment that the employment of the money which it raises conduces to a greater commercial profit than if it had been left to private persons to use, or else that the money is needed for purposes which have to be justified on grounds of necessity quite apart from economic ones….

…what are the root principles of British taxation…? They are very simple. A child can learn them; only a fool can misunderstand them. Here they are. First, no more taxes than are necessary; secondly, what taxes you have let them be substantial and effective taxes; thirdly, change them as seldom as possible; fourthly, let the taxes be such that the whole yield of them goes to the public Exchequer, and that there is no opportunity at any point for private persons to get an advantage or profit out of those taxes.

Are the issues Turgot and George raised at the turn of the 19th century, in society still largely agrarian, valid in a world where land has long been largely enclosed, where the rights of private property are exalted, where wealth is created without any reference to landholdings? Whatever the answers, Malcolm Hill offers a detailed and useful account of Churchill’s thought on the question. It would be ironic if those who admire Churchill for helping to create the Welfare State were to find that it was wrong from the beginning, because it failed to address the root causes of poverty. Yet he saw the problem and tried. It may be that Churchill’s accomplishments during 1904-14 were the same as those at Yalta and Potsdam, in the words of Dr. Larry Arnn: “The best he could do in the situation that then prevailed.”

Larry P. Arnn: Churchill’s Trial: Winston Churchill and the Salvation of Free Government. This is the definitive work on how Churchill saw the challenge of how to “provide for the general welfare” (in the words of the U.S. constitution), while preserving individual liberty within the constitutional framework. Unlike Hill, Arnn considers Churchill’s full career, and the challenges in war as well as in peace.