How Churchill Saw the Future: Prescient Essays from “Thoughts and Adventures” 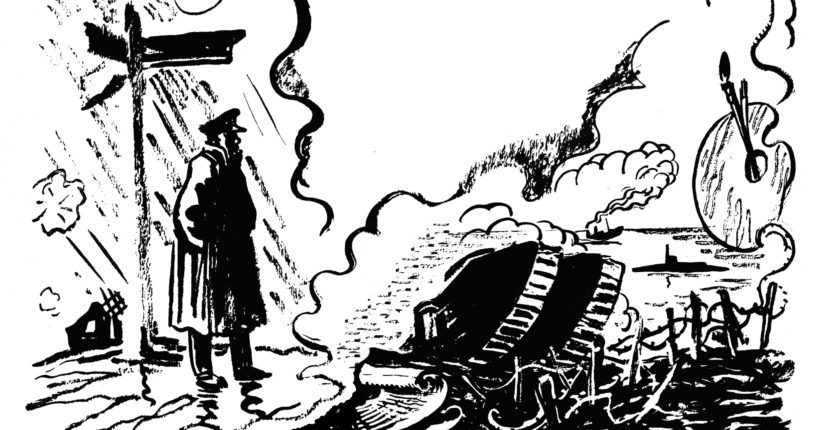 Featured Image: Artwork from the cover of “Reflexions et Aventures,” the 1939 first French edition of  “Thoughts and Adventures.” (Barbara Langworth)

In four essays in his 1932 book Thoughts and Adventures, Churchill contemplated the future. Here he identified trends which would affect the evolution of democracy, constitutional government, and the evolution of society. Those essays were remarkably prescient. Moreover, they offer reflections upon issues as prominent today as they were eight decades ago.

“The relevance of the life of Winston Churchill to our time is apparent in the newspaper any day,” writes Hillsdale College President Dr. Larry Arnn. “It is not so much that the great world wars and the Cold War shaped the time in which we live, although they do. The problem of rule, say the old philosophers, is fundamental. If this is our problem, then Churchill is a man to study.”

Many an advance in science, technology and communication, Churchill argued, “suppresses the individual achievement.” He deplored the rise of the collective at the expense of the individual: “Is not mankind already escaping from the control of individuals? Are not our affairs increasingly being settled by mass processes? Are not modern conditions—at any rate throughout the English-speaking communities—hostile to the development of outstanding personalities and to their influence upon events; and lastly if this be true, will it be for our greater good and glory?” Today such questions merit examination by thoughtful people.

The newspapers do a lot of thinking for us, Churchill wrote. Substitute “media” for “newspapers” and he could be speaking today. He particularly worried about the superficiality of media. True, it provides “a tremendous educating process. But it is an education which passes in at one ear and out at the other. It is an education at once universal and superficial.” Such a process, taken to its ultimate ends, would produce “standardized citizens, all equipped with regulation opinions, prejudices and sentiments, according to their class or party.”

One might think of this during the recent demonstrations, all on one side of the gun issue.

Does the leveling process that produces politicians, Churchill asked, discourage the emergence of great figures? Is the “great man” theory of history dead? If so, is that to the good?

Here Churchill discusses political conduct—the standards of conduct for responsible officeholders. Consistency is a virtue, Churchill declared—but the key to consistency amid changing circumstances “is to change with them while preserving the same dominating purpose.” In part here, as John Grigg wrote, Churchill was “explaining away his own falls from grace. [He] had learned from bitter experience that there are limits beyond which no minister, however talented, energetic, or masterful, dare ignore his officials’ advice.” But there was more to his ruminations than personal experience.

This essay illustrates the unending contretemps between principle and action. Examples may be seen today in questions such as energy production, Putin’s Russia, the economic challenge of Asia, the European Union’s attempt to replace traditional nation-states, trade relationships amidst subsidized or nationalized industries, and the role of the State in the economy. Say an official comes out for tariffs, but later exempts certain countries out of friendship or negotiation. If he maintains the same dominating purpose—in this case free and fair trade—he is, or may be, adapting to circumstances.

“Ideas acquire a momentum of their own,” Churchill wrote. He could have been thinking of opinion polls when he added: “The stimulus of a vast concentration of public support is almost irresistible in its potency.” Are not ideas that contribute to the growth of the collective dangerous to liberal democracy? “There is not one single social or economic principle or concept in the philosophy of the Russian Bolshevik which has not been realised, carried into action, and enshrined in immutable laws a million years ago by the white ant.”

A statesman, he concluded, “should always try to do what he believes is best in the long view for his country, and he should not be dissuaded from so acting by having to divorce himself from a great body of doctrine to which he formerly sincerely adhered.”

This essay forecast the hope and danger of a future nuclear age. Written almost a decade before Einstein wrote his famous letter to Roosevelt, warning of implications of splitting the atom, Churchill’s message thunders to us across the years:

May there not be methods of using explosive energy incomparably more intense than anything heretofore discovered? Might not a bomb no bigger than an orange be found to possess a secret power to destroy a whole block of buildings—nay, to concentrate the force of a thousand tons of cordite and blast a township at a stroke?

has never been in this position before. Without having improved appreciably in virtue or enjoying wiser guidance, it has got into its hands for the first time the tools by which it can unfailingly accomplish its own extermination….Death stands at attention, obedient, expectant, ready to serve, ready to shear away the peoples en masse; ready, if called on, to pulverize, without hope of repair, what is left of civilization. He awaits only the word of command. He awaits it from a frail, bewildered being, long his victim, now—for one occasion only—his Master.

In this essay Churchill speculates on the future: the world of the 1980s. He anticipates the effects of science and communication—biotechnology, cell phones, television, air travel, the age of instant information: “projects undreamed of by past generations,” as Churchill put it: “forces terrific and devastating…comforts, activities, amenities, pleasures”—juxtaposed to the unchanging nature of man:

Certain it is that while men are gathering knowledge and power with ever-increasing and measureless speed, their virtues and their wisdom have not shown any notable improvement as the centuries have rolled. The brain of modern man does not differ in essentials from that of the human beings who fought and loved here millions of years ago. The nature of man has remained hitherto practically unchanged. Under sufficient stress—starvation, terror, warlike passion, or even cold intellectual frenzy—the modern man we know so well will do the most terrible deeds, and his modern woman will back him up.

Can humans change their nature sufficiently to prosper in a future world where pleasures and dangers crowd in upon them? Governments, Churchill wrote, in lines that seem apposite now,

drift along the line of least resistance, taking short views, paying their way with sops and doles, and smoothing their path with pleasant-sounding platitudes. Never was there less continuity or design in their affairs, and yet towards them are coming swiftly changes which will revolutionize for good or ill not only the whole economic structure of the world but the social habits and moral outlook of every family.

Read alongside another essay, “The Lost Glory of Democracy,” “Fifty Years Hence” encapsulates Churchill’s concerns about the handicaps of government:

Democracy as a guide or motive to progress has long been known to be incompetent. None of the legislative assemblies of the great modern states represents in universal suffrage even a fraction of the strength or wisdom of the community. Great nations are no longer led by their ablest men, or by those who know most about their immediate affairs, or even by those who have a coherent doctrine.

Again this is remindful of a later time. Critics say we are replacing the moral compass of religion with a kind of secular humanism and vague internationalism, an urge simply to do right, which is hard to do without a moral underpinning. Churchill feared such developments. It was vital, he wrote, “that the moral philosophy and spiritual conceptions of men and nations should hold their own amid these formidable scientific evolutions.” It would be better, in his view, even to call a halt to material progress, “than to be mastered by our own apparatus and the forces which it directs.”

Today’s challenges are not the same as those of Churchill’s time. It is foolish, wrote Professor Paul Alkon, to believe our times are simply a replay of his. Churchill’s lasting value lies in his approach: not precisely to what he did, but to the broad principles that motivated him. These were concepts he defended: liberty, individuality, courage, magnanimity—the precepts of his country and its relatives across the seas, combining as a force for good.

“Three Aspects of Modern Life That Kept Winston Churchill Up at Night,” by Bre Payton in The Federalist. A review of the latest installment of Dr. Arnn’s “Winston Churchill and Statesmanship” course, which you may take free online: click here.

Churchill’s Trial: Winston Churchill and the Salvation of Free Government, by Dr. Larry P. Arnn, is a scholarly exposition of these and other Churchill thoughts on the future of constitutional democracy.

Thoughts and Adventures by Winston S. Churchill, edited by James W. Muller and Paul H. Courtenay. The latest and best edition of his 1932 work, with a new introduction and extensive notes. “It is like being invited to dinner at Chartwell, where the soup was limpid, the champagne flowed, the pudding had a theme, and Churchill held forth in vivid conversation.”