Which Historical and Contemporary Figures were Churchill’s Inspirations? 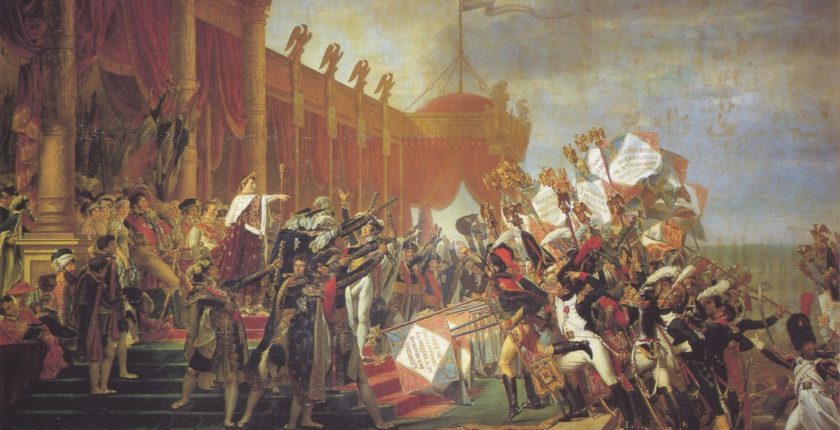 Inspirations: The Oath of the Army made to the Napoleon in the Champ-de-Mars, 5 December 1804. Painting by Jacques-Louis David, 1810. (Wikimedia Commons)

We are often asked which historical and contemporary personages most influenced Winston Churchill’s thought and statesmanship. A student inquiry suggested some; we have added others. We are probably only scratching the surface. More suggestions are invited from readers.

One is right to start with Lord Randolph Churchill, Napoleon, Clemenceau and Marlborough. The classics open another avenue. Readers can find pithy remarks by Churchill on many of the following in Churchill by Himself.

His father was the first of young Winston’s political inspirations, and the subject of his first biography. “Like Disraeli, he had to fight every mile in all his marches,” Winston wrote. “In his speeches he revealed a range of thought, an authority of manner, and a wealth of knowledge, which neither friends nor foes attempted to dispute.” Alas, he died too young. His son remarked in My Early Life: “There remained for me only to pursue his aims and vindicate his memory.” See also John Plumpton, The Writing of Lord Randolph Churchill.

Seekers of Churchill’s inspiration must read his essay “The Dream”—an imaginary 1947 conversation with the ghost of his father, who died in 1895. Read also the excellent appreciation of the piece by Hillsdale College Churchill Fellow Katie Davenport. “The Dream” originated when, at the dinner table, WSC was asked what historical figure he would like to see filling an empty chair. His reply was instantaneous: “Oh, my father, of course.”

Churchill wrote “The Dream” as a private article, and it was not published until after his death. It is a poignant essay. Churchill tells his father the terrible history of the 20th century, without revealing his role in the story. Lady Thatcher, in thanking me for a copy, wrote: “I read it in the early hours of this morning and am totally fascinated by the imagination of the story and how much it reveals of Winston the man and the son.”

Next to Lord Randolph Churchill among young Winston’s inspirations was the Irish-American politician Bourke Cockran. There is no doubting his significance. Churchill was quoting him to a later Democrat politician, Adlai Stevenson, in the mid-1950s. (Stevenson had to look him up!) Cockran was vital not only on Churchill’s oratory, but to his political thought:

It was not my fortune to hear any of his orations, but his conversation, in point, in pith, in rotundity, in antithesis, and in comprehension, exceeded anything I have ever heard…. He taught me to use every note of the human voice as if playing an organ. He could play on every emotion and hold thousands of people riveted in great political rallies when he spoke.

Cockran by that “frequent recurrence to first principles” which the American Constitution enjoins had evolved a complete scheme of political thought which enabled him to present a sincere and effective front in every direction according to changing circumstances. He was pacifist, individualist, democrat, capitalist, and a “Gold-bug.” Above all he was a Free-Trader and repeatedly declared that this was the underlying doctrine by which all the others were united. Thus he was equally opposed to socialists, inflationists and protectionists, and he resisted them on all occasions. In consequence there was in his life no lack of fighting. Nor would there have been had he lived longer.

Is this not the very description of Churchill himself? We can see why Cockran was among his important inspirations. There is a fine book on the subject. Becoming Winston Churchill, by Michael McMenamin and Curt Zoller, is the standard work on their relationship.

For any student of Churchill’s inspirations the Liberal politician John Morley might also be considered. Like Cockran (and indeed Churchill), Morley tried to avoid war—so much that he resigned from the Cabinet when Britain declared war on Germany in 1914. Earlier that year, Churchill paid Morley a fulsome tribute: “For many a year he was an ornament of our Debates, and his learning and intellectual elevation, his brilliancy of phrasing, and the range of his experience, constitute assets and qualifications which the Government value in the highest degree.”

Morley is Churchill’s first subject in his book Great Contemporaries. In it he refers to his famous essay, “Mass Effects in Modern Life,” which deplored the rise of the state and the homogenization of thought and politics:

Such men are not found today. Certainly they are not found in British politics. The tidal wave of democracy and the volcanic explosion of the war have swept the shores bare. I cannot see any figure which resembles or recalls the Liberal statesmen of the Victorian epoch…. The leadership of the privileged has passed away, but it has not been succeeded by that of the eminent. We have entered the region of mass effects…. The world is moving on, and moving so fast that few have time to ask, “Whither?” And to these few only a babel responds. But in John Morley’s prime the course was clear and conscious, and the issues not so large as to escape from human control.

Many do not think immediately of Clemenceau as an influence, but Churchill saw him as one, in his Great Contemporaries. Known as “The Tiger” for his aggressive politics, he was twice Prime Minister, 1906–09 and 1917–20. His determination to win the war was legendary. In 1917 Churchill heard Clemenceau declare, “no more pacifist campaigns, no more German intrigues, neither treason nor half treason—war, nothing but war.”

Churchill admired Clemenceau’s championing of his country and effort to unify France after the peace as much as his military aspects. “The truth,” Churchill wrote,

is that Clemenceau embodied and expressed France. As much as any single human being, miraculously magnified, can ever be a nation, he was France…. The Clemenceau of the Peace was a great statesman. He was confronted with enormous difficulties. He made for France the best bargain that the Allies, who were also the world, would tolerate.

One might say Clemenceau was a kind of French Churchill (or the nearest France came to one). They were alike in another respect: both were dismissed in their hour of victory. Churchill’s words about himself apply to Clemenceau, and remind us of the Churchill family motto, “Faithful but Unfortunate.” In 1940, Churchill wrote, “I acquired the chief power in the State, which henceforth I wielded in ever-growing measure for five years and three months of world war, at the end of which time, all our enemies having surrendered unconditionally or being about to do so, I was immediately dismissed by the British electorate from all further conduct of their affairs.” Thus also Clemenceau, shortly after his own world war ended.

Churchill, a superb military historian, describes Marlborough’s campaigns with precision. But considering his inspirations, one might prefer to ponder the Great Duke’s geopolitical aspects. Leo Strauss, for example, called Marlborough: His Life and Times “the greatest historical work written in our century, an inexhaustible mine of political wisdom and understanding.” His essay is in Harry Jaffa, ed., Statesmanship: Essays in Honor of Sir Winston Churchill (1981).

Churchill’s strategic views, already profoundly affected by the Great War, were to develop significantly during his writing of Marlborough as he considered how his ancestor approached coalition warfare. “It was a war of the circumference against the centre,” he wrote of the War of Spanish Succession, just as it was to be for Britain after the Dunkirk evacuation…. [Churchill] admired Marlborough’s single strategy above the “intrigues, cross-purposes, and half-measures of a vast unwieldy coalition trying to make war…. Not for him the prizes of Napoleon, or in later times of cheaper types.”

Churchill was thus implying during his Wilderness Years that what others saw as Marlborough’s squalid betrayal of his own side should in fact be recognized as the start of the glorious period of renewed national liberty that through his leadership led to the breakup of an antagonistic European hegemony and to the greatness of the English-speaking peoples.  Anyone wishing to spot modern parallels was perfectly free to do so.

Napoleon as writer and statesman

Andrew Roberts’ Napoleon vies with Walking with Destiny in quality, a fine source for inquiring into Napoleon as one of Churchill’s inspirations. Dr. Roberts also refers us to his remarks after being awarded the Grand Prix de la fondation Napoléon. He explained that Churchill’s admiration was for the statesman and writer, not the dictator:

As an English Tory, I was expecting not to like Napoleon when I took up my pen…. Yet it was one of the most enjoyable parts of researching this book to discover that of course the Emperor had a hugely engaging personality and attractive character, and particularly that he had a deliciously dry, ironic wit…. My favourite of them all was when the Grand Almoner of France, the Archbishop de Rohan, wrote an extremely oleaginous letter to Napoleon at the time of the Coronation, comparing him to Jesus and saying that he wished he had the opportunity to die for the Emperor. “Please pay the Archbishop Fr.12,000,” Napoleon noted in the margin of the letter, “out of the theatrical fund.”

Far too many British historians persist in seeing only the dictator, and not the positive aspects of the man I like to think of as the Enlightenment on horseback. The builder, the educator, the encourager of science and industry, the self-made man, the thinker, the writer, the giant and the genius. Instead my countrymen only see the soldier, the conqueror, the invader. They blame all the Napoleonic Wars on him—ignoring his pleas for peace and despite the fact that many more wars were declared on France than he declared against others.

In the words of George Home, a midshipman aboard HMS Bellerophon, Napoleon “showed us what one little human creature like ourselves could accomplish in a span so short.”

Churchill’s inspirations extend to several classical authors or philosophers, like Aristotle, Socrates, Plato, Xenophon and of course Thucydides. Paul Rahe, in “Why Read The River War?”, compares Churchill’s book with Thucydides’ account of the Peloponnesian War: “Nowhere can one find a subtler depiction of the moral and practical dilemmas faced by the statesman in a world torn by conflict. Moreover, Thucydides’ environment was bipolar—as was ours in the great epoch of struggles on the European continent that stretched from 1914 to 1989….”

The works of William Shakespeare figured high with Churchill, who knew many plays by heart. He alluded to Shakespeare more often than any source other than the King James Bible. Shakespeare probably doesn’t’ qualify among Churchill’s inspirations. Rather, he was a rich source of the deathless phrases that punctuated Churchill’s expression. See our website for “Shakespeare” or click here.

Churchill read many more classics in his self-education as a young man. (For the full list, see his autobiography, My Early Life, Chapter IX, “Education at Bangalore.”) They form an adjunct to the more recent and direct inspirations, the figures of more recent centuries. Elsewhere on this website, Dr. Steve Goldfien recommends other classic works which deeply influenced Churchill, with special emphasis on those of the American founding.