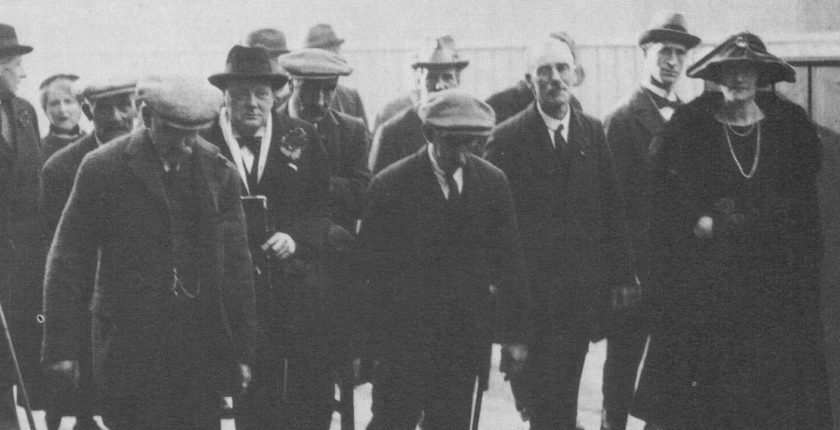 A weakened Churchill campaigning in Dundee after his appendectomy, 11 November 1922. His wife Clementine is at right. The poll was declared November 16th, he later wrote: “In a twinkling of an eye I found myself without an office, without a seat, without a party, and without an appendix.” (Mary Soames)

A weakened Churchill campaigning in Dundee after his appendectomy, 11 November 1922. His wife Clementine is at right. The poll was declared November 16th, he later wrote: “In a twinkling of an eye I found myself without an office, without a seat, without a party, and without an appendix.” (Mary Soames)

Following previous abstracts (see “Further reading” below), Vale and Scadding now complete their survey of Churchill’s health through his death in 1965. The format of their earlier articles continues. They present the evidence (mainly from diaries and memoirs), offer a chronology based on the official biography, quote press reports, and extensively discuss causal factors. Since technical language is minimal, their articles are readable by non-physicians. The main text is accompanied by vignettes on the relevant people and places.

The 1922 general election left Churchill out of office for the first time in fourteen years. Its story is well known. On 19 October 1922, Conservative Members of Parliament meeting at the Carlton Club voted to leave the government; Prime Minister Lloyd George had led a coalition of Tories and Liberals since 1916. Their decision led to the fall of the government, dissolution of Parliament, and a general election called for 15 November. Churchill at this time was Secretary of State for the Colonies.

Churchill announced that he would campaign to retain the Dundee seat he had held since 1908. But on 16 October, he complained about pains in his side. On the 18th, his appendix was removed with difficulty by his surgeon, Sir Crisp English. Post-operative tests detected no clinically significant infection, despite the presence of necrosis.

On 1 November, English wrote to Viscount Dawson of Penn, a senior physician, from whom he requested a second opinion. Churchill was recuperating and wanted to campaign in Dundee. He wished to address a November 11th meeting on a carrying chair. Lord Dawson examined Churchill and made no objection. There were no unexpected complications and Churchill spoke in Dundee as planned, though he was still very weak.

The rest of the story is also familiar. On November 16th, Churchill learned that he had been defeated by his longtime prohibitionist rival, Neddy Scrymgeour, who had persistently opposed him since 1908. Soon afterward, he decided on a long, recuperative rest on the French Riviera.

Churchill developed a hernia [inguinal, or pertaining to the groin, inguen in Latin] when he was a boy. He had consulted a physician about it as early as 1891. Vale and Scadding reveal that it only began to trouble him in the Second World War, when he sometimes had to interrupt meetings to get some rest. His doctor Lord Moran claimed that it became more serious in September 1945, when they were staying on Lake Como at Field-Marshal Alexander’s invitation.

Moran sent for Brigadier Harold C. Edwards, consulting surgeon for the Army in Italy. Edwards later told his son how he had, with difficulty, procured a truss from a surgical outfitter in Milan. The truss brought some temporary relief but only an operation could solve the problem for good. Churchill was reluctant to undergo surgery and only finally bowed before the inevitable in 1947.

It is not clear (at least from Lord Moran’s published narrative) when exactly Sir Thomas Dunhill first attended Churchill professionally. It was probably in 1941. But when Churchill finally accepted the operation, it was entrusted to Dunhill. This surprised many people, since the Royal surgeon was now 71 and had not practised in the operating theatre for some time. In fact, Dunhill rehearsed on other patients before operating on Churchill. There is a suspicion that the actual surgery was performed by one of Dunhill’s distinguished assistants, Sir James Paterson Ross, though Churchill never knew this.

The apparent explanation for all this is that Churchill liked and trusted Dunhill. The surgeon was one of his few personal friends who received signed copies of The Second World War. And Churchill was right to trust him, since the operation proved to be a great success. The aging patient never complained about his hernia again.

Winston Churchill had a busy year in 1959, attending Other Club functions, accepting reselection by his constituency for the forthcoming General Election, meeting Konrad Adenauer in London, cruising on holiday with Aristotle Onassis. Ostensibly he held important political consultations with President Eisenhower.

Yet many or most of these appointments posed problems because of his deteriorating health as he neared age 85. On the evening of 13 April, his valet-cum-nurse noticed that he was not speaking normally. He alerted Lady Churchill, who in turn alerted Lord Moran. The doctor contacted Churchill’s neurologist, Sir Russell Brain. Moreover the little finger of Sir Winston’s right hand was cold and blanched.

On the 20th in his constituency, Sir Winston put himself forward for adoption for the ninth time. The speech was a great success. The authors believe that his dysphasia [language impairment] was caused by “a small completed stroke rather than a transient ischaemic attack” [see their earlier articles for the meaning of these technical words].

The next difficulty was a planned visit to the United States on 4-10 May. In Washington, Churchill planned to meet Eisenhower; then he would go to New York to see his old friend Bernard Baruch. Lady Churchill, given the inevitable stress, was against his taking the trip, but her husband was adamant.

Indeed on 7 May, Churchill developed what the local doctor diagnosed as gangrene in the little finger of the right hand, whose tip had turned black. On his return, vascular surgeon Professor Charles Rob examined him at Lord Moran’s request. There had been a clot in the artery of his little finger. Rob said rest was of the highest importance. As usual Churchill refused to cancel his scheduled activities, like lunch with Prime Minister Macmillan and the annual Beaverbrook Dinner.

In the event, his little finger recovered its normal color after three months. The summer went well, cruising in the Eastern Mediterranean and resting in Monte Carlo, but after a short loss of consciousness on 22 October, Churchill had another episode of left cerebral hemisphere ischaemia on 17 November. Once more, he quickly recovered, but all these incidents left traces. Vale and Scadding conclude: “There was little doubt that Churchill’s cognitive function was gradually deteriorating, most probably on the basis of increasing cerebrovascular disease.”

Churchill’s doctors tried hard to diagnose what damage may have been caused by his fall in his wife’s bedroom at Hyde Park Gate; he was leaving it after kissing her goodnight. They tried various techniques and treatments to repair the damage—so successfully, as it turned out, that Lord Moran was able to say by the end of January 1961 that his patient was “back where he had been before.”

In this article many complicated medical terms are used. The basic fact was that Churchill’s fracture of a vertebra was correctly and almost instantly detected. But owing to the limited technical facilities of the time, a “small vessel cerebrovascular disease” may have gone unnoticed.

That “back where he had been” does not mean that the whole episode went smoothly. Churchill was in great pain following the fracture, and this made the physicians’ job more difficult. Ideally, for example, he would have been x-rayed in a sitting position, but he could not bear the pain. Physical or mental pain always made a difficult patient, both for doctors and nurses.

For Churchill’s behavior after the accident, the authors draw heavily on the memoirs of his male nurse, Roy Howells, a key witness. Howells was the first person to be called by Lady Churchill. He attended Churchill through his sometimes painful and always uncomfortable recovery. One particular source of discomfort was the special bed which was necessary to keep him upright because of the bronchitis risk: “Narrow bed—narrow minds,” he grumpily told his physicians.

Professor Sir Herbert Seddon, Clinical Director of the Royal National Orthopaedic Hospital, was the main agent of diagnosis and treatment. Throughout the period, Seddon noticed “certain abnormalities of behaviour, sudden bursts of rage, periods of apathy and sulkiness, with intervals of cheerfulness.” These “abnormalities” may well have been the result of the then common technique of administering quinalbarbital. This is “a barbiturate hypnotic” whose effects are made worse by intoxicating liquors. Inevitably, “Churchill continued to imbibe alcohol throughout his illness,” yet he was still perfectly fit to fly to Monte Carlo early in February 1961.

On 28 June 1962, two days after arriving at Monte Carlo, Churchill fell in his eighth floor suite at the Hôtel de Paris. An X-ray revealed he had broken his left leg in the upper third of the femur. The accident is not recorded in Lord Moran’s book.

Churchill was carried to the Princess Grace Clinic to receive a plaster cast. There a conflict broke out between the Monaco medical staff and his British entourage. Should he be treated locally, as strongly advised by the clinic authorities? Or should he go to London, in spite of the risks, as all around him thought he should? Consulted by telephone, Lord Moran and Lady Churchill agreed with the latter course. The patient himself, his private secretary famously recorded, told him: “Remember, I want to die in England. Promise me that you will see to it.”

The family’s wish prevailed. Prime Minister Harold Macmillan sent a special RAF ambulance plane to fetch Churchill at Nice airport, thirteen miles from the hospital. Sir Winston, on a stretcher, bore the ambulance trip and the flight very well. He arrived in London at 1:30 pm on June 29th, to be greeted by his wife, son, Lord Moran and an orthopaedic specialist. Cheered all the way, he was transferred by ambulance to a private wing of Middlesex Hospital.

Sir Winston was operated on at 6 pm by Doctor Newman and Professor Seddon, who had treated his previous fracture in 1960. The break was easily reduced and Churchill was in his room again by 8 pm. In the next few weeks, his slow recovery was satisfactory, but there were some periods of mental confusion. Churchill grew impatient, reluctant to take his medicines and anxious to leave before the medical authorities thought it advisable. His son Randolph said he was “absent-minded and bloody-minded.”

There were some minor complications and false alarms, notably a deep vein thrombosis and transient jaundice, the latter probably caused by the drug used in its treatment. Churchill was discharged on 21 August, having spent fifty-four days at Middlesex Hospital. His postoperative stay in hospital was a prolonged one. Yet, at age 87, the great man had again successfully recovered from a potentially disastrous accident.

Antoine Capet, FRHistS, is Professor Emeritus of British Studies at University of Rouen, France. He is author of a new reference work, Churchill: Le Dictionnaire. Abstracts are intended as synopses of contents, not as reviews or endorsements of the papers or articles covered