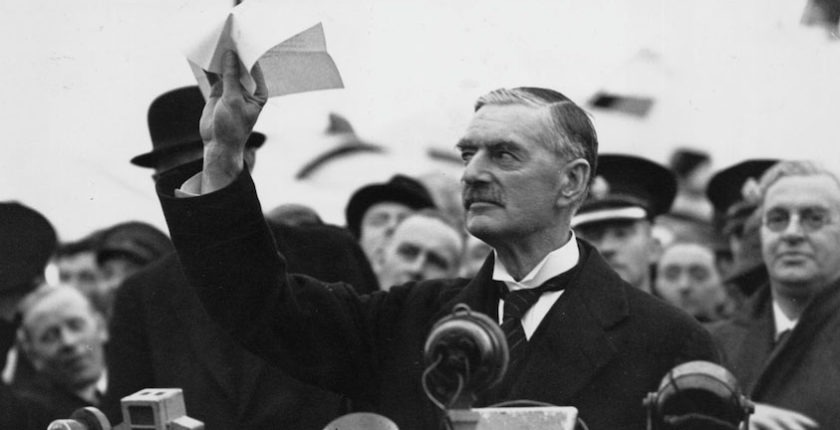 Third among the patriots who risked everything to apprise Churchill of Britain’s weakness was RAF Wing Commander Torr Anderson (played by David Quilter), director of the Air Force Training School, who pours out his worries to Churchill’s secretary Violet Pearman (Sherrie Hewson) and joins the statesman’s inner circle. You must excuse the painting session in the drawing room—at Chartwell, Churchill’s indoor painting was always done in his studio.

Prime Ministers Baldwin and Chamberlain remain determined to understand and assuage Hitler, as dramatized in a fraught meeting at Number Ten, where they are challenged by both the desperate Air Minister, Lord Swinton (Walter Gotell), and the Foreign Secretary Anthony Eden (Tony Mathews). Baldwin confides that what he most looks forward to in his upcoming retirement is “no more Winston.”

Then, in a private tête-à-tête which symbolizes much of their relationship, Baldwin secures Churchill’s agreement to second Chamberlain as his successor. This enrages Brendan Bracken (Tim Piggot-Smith), but is quite in character. Churchill felt obliged to honor his obligation as Senior Privy Counselor, and his friendship with his old chief, despite their political disagreements—very typical of him.

So Baldwin goes and Chamberlain takes over, and Churchill is not asked to join the government. Robert Hardy shows us his frustration, torn between making Britain’s weakness public for enemies to see, or to muffle his protests in the hope that Chamberlain will realize the mounting peril. He is rudely brought back to earth when Anderson tells him that the RAF is welcoming a visitor, the German Air Minister Erhard Milch, who has been rebuilding the Luftwaffe. Ironically, the RAF is scratching for enough planes to impress Milch, even though some of them can’t even fly.

Ah, to be in the Reich now that spring is here! In another expression of fellowship, Hermann Goering has invited Lord Halifax, then Minister of War, on a hunting holiday, although more correctly the British should have sent Foreign Minister Eden. This scene symbolizes Eden’s growing dissatisfaction with appeasement, which leads to his resignation in February 1938.

In reality, Eden resigned over Mussolini, who sent troops to assist the Spanish fascists after promising he would not. Chamberlain had gone over Eden’s head, offering a new agreement to the Duce, who had called Eden “the best-dressed fool in Europe.” In 1967 Eden explained: “I never cared a tuppence about protocol. The reason was that we had an agreement with Mussolini…which he was violating, and Chamberlain wanted to have another agreement.”

Anthony Eden became a dissenter, heading his own anti-appeasement group, called “the glamour boys,” in the Commons, though he and Churchill were never allies until he became foreign minister again in 1940. But as we see here, his departure struck Churchill hard. Quoting from his memoirs, which are not the script:

“From midnight till dawn I lay in my bed consumed by emotions of sorrow and fear. There seemed one strong young figure standing up…against the wrong measurements and feeble impulses. My conduct of affairs would have been different from his in various ways, but he seemed to me at this moment to embody the life-hope of the British nation, the grand old British race that had done so much for men, and had yet some more to give. Now he was gone….”

Featured Image: Prime Minister Neville Chamberlain during his now-infamous “peace in our time” address, delivered following the Munich conference of 1938.